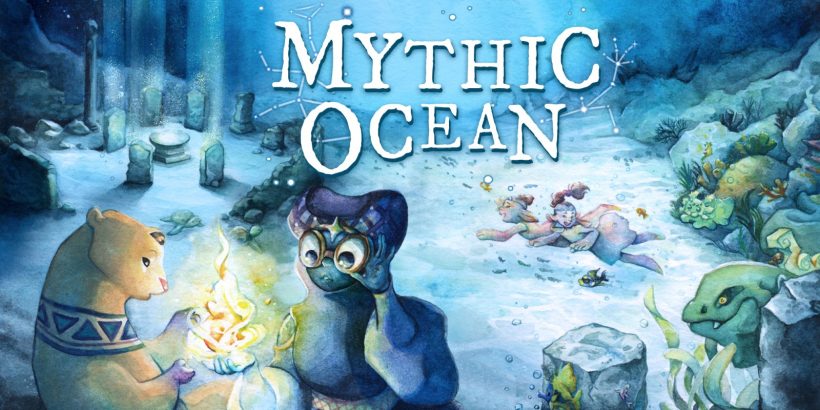 In Mythic Ocean, you influence the creation of a new world.

It’s a hefty task, and to do it you’ll have to find various underwater gods. Your actions dictate which one will be chosen as the creator. However, these gods don’t know they’re responsible for the next world, and they need guiding towards the right path.

The gameplay involves talking to each character and choosing between dialogue options. Most of Mythic Ocean’s relatively short runtime is taken up by these conversations, though there is a bit of exploration too. Once you’ve found a god, you can teleport back to them at any time to advance the story.

Critically, Mythic Ocean’s dialogue and storyline are pretty immersive. Each god is unique, with their own motivations and fears, and speaking to them is more fun than it might initially sound. How you interact with them has a real effect on the game as a whole, and the dialogue is well-written and entertaining. The characters feel very well thought out and there’s quite a bit of emotion to be felt. Helping them grow as individuals is compelling, and how they turn out in the end has a major impact on the creation of the new world.

There’s no way to die or fail any of the tasks presented to you, so it’s quite a peaceful, relaxing game. There are a couple of darker ideas in here, but nothing too jarring. The environment is tranquil and fun to explore, and the music is pretty nice too. None of it really stands out on its own, but some solid effort has clearly gone into achieving the peaceful, aquatic vibe this game is aiming for.

Even though the story is so short, there are enough twists and turns to keep you hooked through the two to three hours it’ll take to complete. It would be nice if the gameplay between the conversations was more interesting, but unfortunately it’s very lacklustre compared to the story surrounding it. There are collectible pages to find in the world and lots of quirky creatures to speak to, but ironically there isn’t much depth to these underwater inhabitants. Collecting these pages does have an effect on the gameplay though, so there’s a reason to venture a little further.

Mythic Ocean’s brevity does hold it back, and you might find yourself wishing there was more to see and do. At times, it feels like a small slice of a much larger game. The concept is great, and if it was expanded on this could have been a truly special title. There’s just not enough content here to justify a purchase unless the premise really excites you.

Once you run out of things to discover, you’ll just be teleporting between each god to advance the plot, and it feels like a bit of a waste of the world that’s been created here. The gods don’t really interact with the environment, and it feels like more of a backdrop to the story than an actual lived-in habitat. Certain parts of the story really shocked me, and the different possible endings add some replayability. However, these endings aren’t really worth playing the whole game again for — the outcome can change, but the game itself doesn’t differ enough to make it worthwhile.

That said, if you’re looking for a short text-based adventure to get stuck into, you can do much worse than Mythic Ocean. It’s a pleasant experience with a good story. What it lacks in depth it makes up for in charm and creativity, it’s just a shame certain parts of the game weren’t developed further. A sequel could deliver on the potential this concept has, but Mythic Ocean doesn’t quite manage to go all the way.

Mythic Ocean is a fun little adventure with a strong narrative and memorable characters, but it ends before it has a chance to really leave an impact on you.