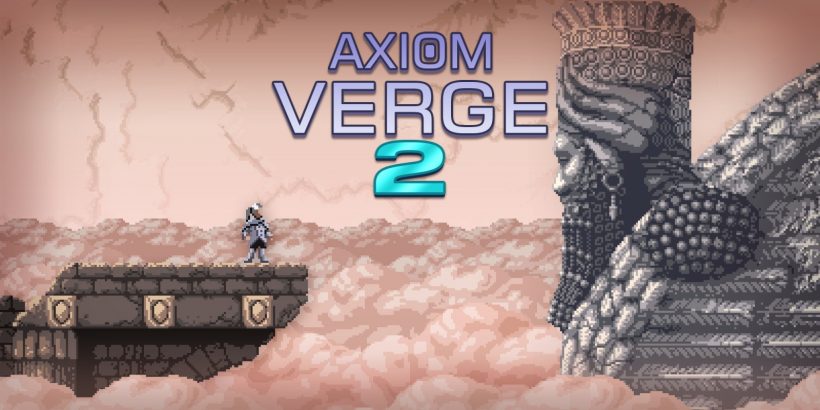 There’s a special synergy when it comes to the Nintendo Switch and Metroidvania games. After an aeon of the genre feeling like it had all but been abandoned, indie developers have hustled to deliver their own great – nay incredible – takes on the genre. You can’t swing a digital cat in the eShop without knocking one down. The original Axiom Verge leaned heavily into the Metroid franchise, demonstrating creativity and a deep understanding of the series that I hadn’t seen before. It earned a well-deserved 5 stars in Switch Player. It was wonderful.

Since its release, Tom Happ has been beavering away on the sequel. Set before the first title, Axiom Verge 2 has a brand new take on the AV universe. The retro pixel art is more 16-bit style now but an amazing soundtrack is still present. You’ll be right at home if you’re familiar with the first game.

Before we start on the game itself, I want to applaud its accessibility efforts. From the options screen you can adjust how much damage you take and every button is remappable. Yes, you can switch the D-pad and buttons if you like! It’s a real boon to how much thought has gone into making sure that absolutely anyone can play this game.

The game kicks off with you on an expedition to an arctic base. You’re the CEO of a multibillion-dollar corporation who has received a mysterious message that your estranged daughter is here. Inevitably, things don’t quite go as planned and you’re transported to another universe where drones powered by a sentient AI attack you at every turn. The mystery deepens as you search for your daughter and a way home.

You’ll soon learn this is a different style of game to its predecessor. Instead of a blaster you have an ice pick as your main weapon. It can be somewhat jarring at first, especially as you can stand alongside some enemies who only damage you with their attacks. If Axiom Verge was a Metroid pastiche, this sequel is for you Castlevania fans. With a fair bit of Blaster Master thrown in for good measure. While previously, you charged through areas with a variety of guns, you’re now launching yourself at enemies in the hope you can get to them before they harm you.

The map is an incredible feat of design. Every space in the overworld is accounted for. There are no tunnels or passageways connecting areas. It’s a full, dense grid of criss-crossing areas with unique styles and music. There’s a sub-world that connects different areas of the map. You send a drone into this to explore and find new exits to your overworld. The maps overlay perfectly and you can glimpse one world from the other while playing. It’s really, really good and allows for some great world and space puzzles.

There are two types of power-up in the game. The essential upgrades allow you to reach those further areas later in the game. Additionally, “apocalypse flasks” provide skill points that allow you to choose how you power up. This sounds like an ideal way to progress but in practice it doesn’t work so well.

The skill points allow you to level up your character. If you are willing to just poke around unexplored areas and find the flasks, you’ll soon be launching yourself through each zone like a berserker Viking with very little care about your health. The tipping point is sudden and makes a mockery of the combat system.

The boss battles also suffer for this. Bar two, every boss is optional so there’s nothing stopping you sauntering past them and coming back later. The non-optional bosses allow you to respawn indefinitely so the challenge is completely removed. I raved about the accessibility earlier, but it’s too much here. Instead of the delicate dance of risk/reward, you can simply stroll up to any enemy and smash it with your axe.

That said, AV2 clearly wants you to enjoy the exploration and puzzle solving of its world. I think that there’s a new emphasis on the Metroidvania staple that Tom Happ wants us to focus on. Unlike a game such as Hollow Knight, renowned for its sometimes brutal difficulty, you’re given this whole world to explore and solve. Without the fear of encountering a boss fight that would stop your game dead in its tracks, you can take it all at your own pace. There’s possibly a new sub-genre ripe for future games to explore. Taking the pressure off a little made me appreciate this more.

Sadly, the various areas of the game are physically gated with a single point of access until you have the essential skill to overcome it. The upshot is that the story can be delivered as intended while the game itself becomes more linear. This may suit a lot of players but the freedom to explore areas with multiple paths is something I really enjoy. Some games in the genre allow more than one way into a specific area lending itself to making the journey your own story. With Axiom Verge 2’s new emphasis on exploration, this would have been a real treat.

In its own way, Axiom Verge 2 is a great game that’s immensely satisfying to explore. But, compared to its predecessor, it’s a flawed diamond.

Axiom Verge 2 doesn’t quite deliver the same thrill and nuance of its predecessor. There are great ideas at play and an engaging story if you can commit to it. But be prepared to come away slightly underwhelmed.