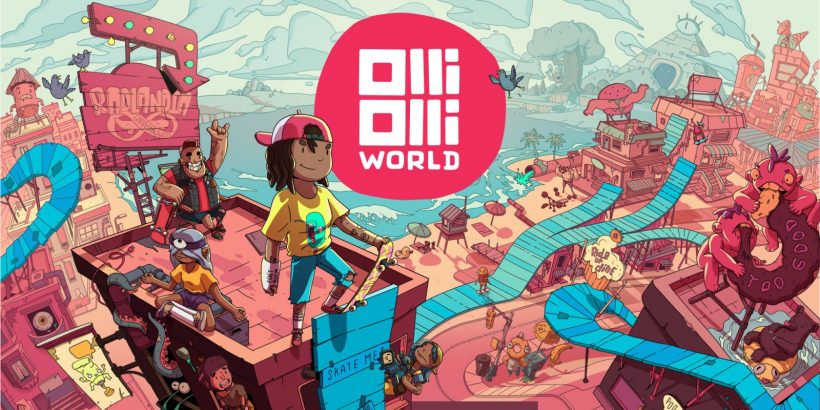 The joy of skateboarding down the street at pace is a feeling that most of us will unfortunately never know. Balancing? On a board? While it’s in motion? It all sounds like a bit too much effort. Thank the skate gods, then, that a charming franchise such as OlliOlli exists to make the act of kickflipping, grinding, and air grabbing as chill as it is challenging. Doubly so now that the so-called “World” is at your feet. It’s a promise that developer Roll7 has more than delivered on, as OlliOlli World’s fresh art style, new skate mechanics, and wholesome humour combine to make it the best series entry yet – and an early indie GOTY contender.

OlliOlli World’s effortless mix of tight, twitch-based skateboarding and attractive 2.5D environments would be enough on their own to make gliding through levels and knocking out their individual challenges a breeze. However, it’s even more impressive for players familiar with the original OlliOlli and its 2015 sequel, seeing as almost every gameplay aspect has been fleshed out for the better. You see, while navigating rail grinds, manualing, and (yes) performing ollies always felt good, the minimalist visuals couldn’t really capture the epicness of these manoeuvres. Now, that’s no longer the case, thanks to a beautiful cell-shaded presentation that feels ripped right out of an Adult Swim cartoon.

The inclusion of an extra half-dimension brings added depth to levels, yes, but it also layers in a lot more life. There are five total lands that make up the skater’s heaven of Radlandia, and they all do well to immerse you as you skate through zany sights, whimsical characters, and plenty of optional side missions for you to conquer. In fact, so much has changed structurally and aesthetically that you might initially question whether this is still the OlliOlli you know, but all should rest easy knowing that the same “Skate. Score. Repeat” gameplay loop remains. There’s just so much more to it now.

One of the major differences this time, for instance, is in how not hitting the A button upon landing no longer classifies as an instant failure. Previously a way to keep you constantly engaged, OlliOlli World still encourages you to achieve “Perfect” landings by granting more points after a successful combo, but it’s no longer the be-all and end-all of seeing a stage through successfully. It’s just a small part of Roll7’s wider intention to have this threequel be much more approachable, imbuing you with the confidence to retry stages to complete optional challenges, rather than sending you into a repetitive rage fit of frustration.

Also feeding into this ethos is OlliOlli World’s decision to include multiple checkpoints in each stage, instead of forcing you back to the beginning every time. Don’t worry, though, restarting this way is near instantaneous – as it should be in any game where you’re encouraged to undertake multiple attempts – and purists fearing that World suffers from a lack of challenge as a result of these generous checkpoints needn’t, because it’s entirely your choice to use them. World is by far the most tailorable OlliOlli entry in this way, striking an almost perfect balance between being hardcore and accessible.

You’d think that adding in such new tricks as wall rides, vert ramps, and air grabs would make entering that all-important skateboarding flow state more cumbersome. In actual fact, it’s the opposite, not least because most of the tricks are dictated by the environments your ride through, rather than you having free reign. Almost all of them are pulled off using the same flick of the left analogue stick required for launching into basic ollies and kickflips. The only exception is the air grab, which is pulled off using the right analogue stick and is a great way to make effective use of air time.

That said, the writing and characters are a tad disappointing, if only because they screech the action to a grinding halt both at the beginning and end of levels. The first two OlliOlli games may have been fairly stripped-back, but this worked in terms of letting you barrel through stages with barely a breath in between. The idea of you being a fully customisable skater trying to appease Radlandia’s gods by achieving the rank of Skate Wizard is no doubt alluring. But in practice? It only serves to get in the way of itself. Visually, there’s also the odd frame rate hiccup on Switch in some of the more built-up stages, but it’s never enough to make or break your chances of achieving a high combo.

OlliOlli World is an expert example of what happens when a rock-solid gameplay formula is evolved in a way that only adds and never takes away. True, the perspective may have slightly shifted, and the tone might be more whimsical, but zooming through countless deliriously creative stages in search of a high score is still insanely addictive. It’s side-scrolling skating perfected, now more approachable for everyone to enjoy.

Rarely has skateboarding in a game felt so creative and accessible as it does in OlliOlli World. It’s very much more of the grind-based platforming that long-time fans will know, just with even more tricks and challenges primed to keep you coming back for more.