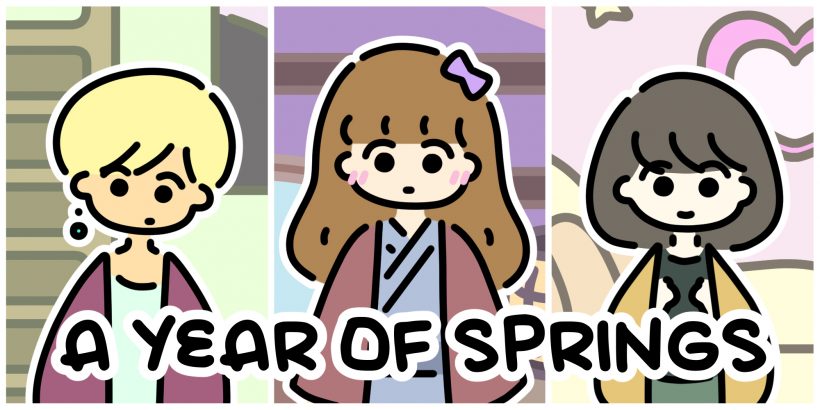 A YEAR OF SPRINGS is a cute visual novel about three women living in Japan. And, admittedly, I wasn’t expecting to get much out of it when I first started. The art style and writing struck me as a little basic initially, and I’ve never really been into visual novels. Soon though, I found that I was genuinely engaged with the three characters, and I was left with a short but sweet title that’s easy to appreciate.

The most notable thing about this game is its unique story and the topics it brings to light. It focuses a lot on LGBTQ+ issues, including gender identity and how transitioning can affect people’s lives. It also tackles sexuality, and talks about some underexplored topics related to romance and love. If you’re LGBT you’ll probably get a lot more out of this, but that’s not to say it can’t be enjoyed otherwise.

I learned quite a bit about what it’s like to be trans in Japan, and I appreciated the relationships between the characters and the topics the game approaches. There’s Haru, an anxious trans woman, Erika, a well-meaning ex-rebel, and Manami, a student struggling with relationships. I particularly related to a lot of what Haru had to deal with in the story. Certain lines hit very close to home but, again, this won’t be the case for everyone. Regardless, A YEAR OF SPRINGS can get quite emotional and heartfelt, but it never becomes overbearing.

It’s nice to see such great representation on Switch, and it’s great that this game didn’t shy away from the more heavy topics. It’s rare a game approaches issues like gender or sexuality in such a genuine and compelling way, and the story is carried by it. The writing could be improved in places, but it hits hard in others. For a short visual novel, it does what you’d expect it to do and then some.

But it’s not without a couple drawbacks, one of which is the tedium of replaying stories if you choose the wrong options. If you don’t pick the right line of text, sometimes the story will just end and you have to go back through it from the start. That is, unless you’ve manually saved the game, which isn’t really on your mind when you’re just reading text. You can fast-forward, but I’d rather just have an autosave function before any game-altering decision. It’s not really fun to fast-forward through the same text multiple times if you mess up. I don’t know if this is a standard feature in most visual novels but, for me, it wasn’t perfect.

And despite the laidback, cutesy aesthetic, it does still look rather basic. It’s not a huge criticism, because this is a game you play for the story and the topics within. It’s worth mentioning though, because more detailed graphics could make the “visual” side of this visual novel a lot more interesting.

Still, I’m really glad I got to play this game and spend some time with these characters. I grew attached to them despite the short runtime and the simplistic drawings. They felt like real people dealing with real situations, and the issues they faced hit harder as a result. It’s not for everyone, but A YEAR OF SPRINGS is a great little story with a memorable trio at its centre.

A YEAR OF SPRINGS is a cute, charming adventure with great characters, and it tackles underexplored issues that are important to a lot of people. Some will get more out of it than others, but’s that’s ok.