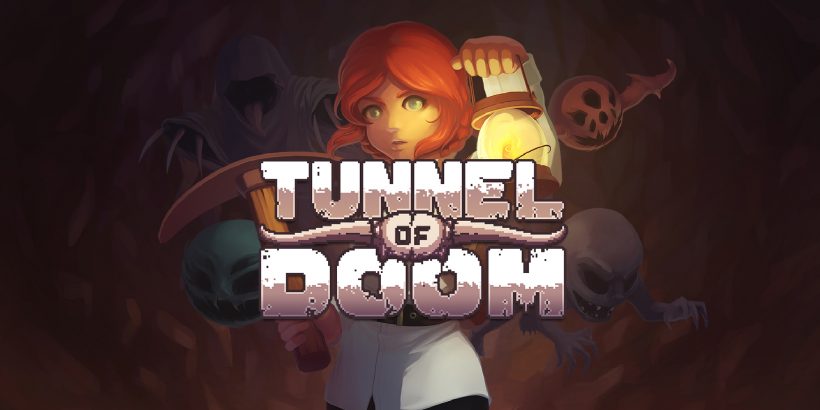 Just how far would you go to save a loved one?

An action rogue-lite hybrid that mixes tower defence with melee- and ranged-combat gameplay, Tunnel of Doom is all about trying to save a loved one while facing some very dangerous obstacles.

In a small mining town known as Goldcrest in 1903, the town’s Mayor has shut down the mine due to an unknown incident. Angel’s husband is trapped inside the mine, and as it becomes seemingly apparent that nobody is going to go looking for him, she takes it into her own hands and enters the mine to investigate herself. She doesn’t know what awaits her in that mine…

When entering this randomly generated mine, Angel will be faced with ghoulish creatures that need to be destroyed before she leaves for another room. To do this, Angel will need to collect resources and get a little clever. This is where the tower defence aspect comes into play.

Each room in the mine contains a variety of things: monsters, people to save, resources, gold. But, unlike any other rogue-lite I’ve experienced before, Tunnel of Doom doesn’t just throw you into a room full of enemies and expect you to deal with them off the bat. Instead, you’re told the number of enemies that will be appearing, and where they are coming from, so you have time to set up your room beforehand.

Angel has a variety of items at her disposal to make her time defeating enemies much easier. See, every resource you collect (mostly stones, glass, and wood) will be used to craft items of defence. Wood barricades, glass barricades, rock barricades, and hole covers will be used for many things — it’s up to you how to use them. Whether you want to use obstacles to create a set route for enemies, or just cause lots of damage by littering the floor with glass barricades (which works so well, by the way).

On top of the basic defences you can build, you’ll also be able to purchase cannons which will automatically fire a specific resource depending on which you have, the most common being the wood cannon. They’re pretty slow but are extremely helpful in getting rid of numerous enemies in a room.

Of course, you are able to attack enemies yourself, if needed. Angel will carry many items that can be used for ranged or close attacks. Guns, and glass shards tend to be your safest bet though as you will avoid damage. On top of that you have your trusty pick axe, if you want to get up close and personal — and dynamite to make things go boom.

You can also use light as your ally since certain enemies take damage from light sources. It’s super helpful when there’s a large group of enemies coming at you.

One thing that became pretty apparent in Tunnel of Doom was that the story was relatively short, easily completed within a few days. But, upon completing the story you do unlock a further two game modes. One is a more difficult story mode and the other acts as an endless mode. All good fun, they provide you with a lot more playtime.

Overall, Tunnel of Doom is a fun little rogue-lite that mixes up its gameplay in a way I’ve not seen before. Sadly, it is fairly basic and doesn’t have enough in it to keep you entertained for a long period of time.