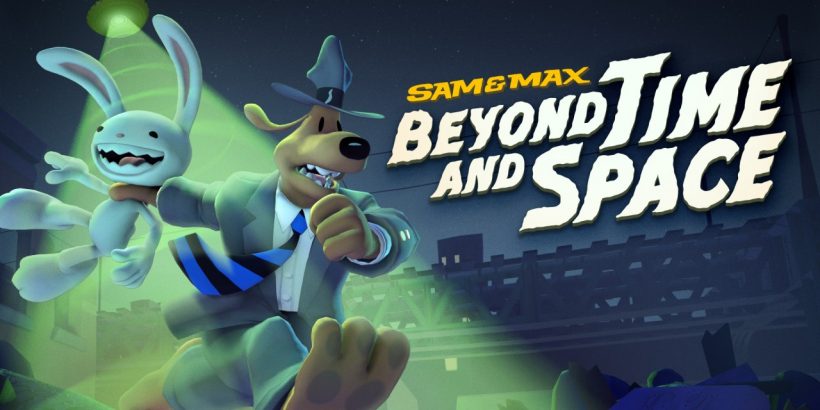 The second in a series of three, and the second to be remastered, Sam and Max: Beyond Time and Space Remastered brings the freelance police team back into the spotlight again—and back into our hearts.

Originally released in 2007 as Sam and Max Season 2, this episodic adventure continues to follow the far-fetched lives of Sam, a giant six-foot-something dog, and his partner, Max, an impulsive rabbit. This unusual duo takes on the most bizarre and wacky cases as the Freelance Police.

Set in a paradoxical New York City that parodies all things American pop culture, this point & click game has received significant updates to the original, the most noticeable being the updated graphics. The HD visuals look leaps and bounds better than they did in the original counterpart—combine that with the improved lip-sync animations and gorgeous cinematography, and you have an extremely pretty game.

The gameplay is what you would expect from any point & click adventure but Sam and Max: Beyond Time and Space Remastered does throw in the occasional mini-game to mix it up a little. As you might expect, Sam and Max take on several cases, solving them across what was originally five episodes. While doing this you will be required to question suspects, find clues and evidence, and figure out how how they actually tie into your investigation.

On your adventures with Sam and Max you will come across a lot of fun and entertaining characters and be taken on a lot of far-fetched scenarios. You will come across a giant robot that likes to destroy the city, you will meet zombies who love to dance, and will face off against a Eurotrash vampire. It’s random and it’s fun. Nothing else matters.

As well as facing off against interesting characters/enemies, your travels will land you in some very unusual places. Santa’s workshop, Easter Island and even Hell are just a few of the places Sam and Max find themselves. Come on, it’s a game where you play as a rabbit and a giant dog in a suit—what more did you expect?

As is the case with most point & click games that I’ve played, the difficulty can be quite inconsistent. At some points I found it really obvious what I had to do in order to proceed but at others, the answer required me to do something that I would never have thought of. This becomes a little annoying because it breaks the flow of the gameplay. What was handy though, was that you could talk to Max at any point to get a clue.

Skunkape Games—who have handled the remaster—have also added eight new music tracks that have been incorporated into the game. These were recorded by a live Jazz band, which sounds great and helps it to feel like a newer title. It still has all the old tracks, too, remastered and re-encoded.

If you played Sam and Max: Beyond Time and Space when it originally released, you will probably notice that some aspects of the gameplay differ from the original. Some jokes have been modernised, some have been removed completely due to them just not being relevant anymore, and some characters have changed voice actors, such as Bosco.

The reason for the change of voice actor from Joey Camen to Ogie Banks for Bosco was the fact that the team didn’t feel comfortable with a white voice actor portraying an African-American in a stereotypical fashion. It’s worth pointing out that both voice actors did a fantastic job of portraying Bosco.

The changes to the remaster are entirely cosmetic: new camera angels, an improved user interface as well as updated graphics all give the game a fresh feel, but any issues you may have encountered the first time around will still be present. That being said, I didn’t come across any problems during my time playing, other than the odd frame rate drop. So I was pretty impressed considering the game’s age.

The Nintendo Switch version of the game has implemented touchscreen support which is quite handy when playing undocked. Players will be able to use this to tap on various interactive elements as well as to control Sam’s movement by pressing to set where you would like him to go.

Interestingly enough, all five episodes are unlocked straight away, and players will be able to choose in which order they play through them. If you should want to play one particular episode for nostalgic reasons, you can. Obviously, I’d suggest playing through all episodes in the intended order for the best possible experience.

Speaking of the experience, Sam and Max: Beyond Time and Space will give you a great one, whether you played the original or not. It’s hilarious, charming, and simply a ton of fun to play through. The protagonists themselves are extremely likeable, which is a plus, and their personalities complement each other delightfully.

Overall, Sam and Max: Beyond Time and Space on Switch is the best way to play this hilarious point & click adventure. The updates are just enough to make it feel like a newer release and whether or not you have played the game before, you won’t be disappointed.