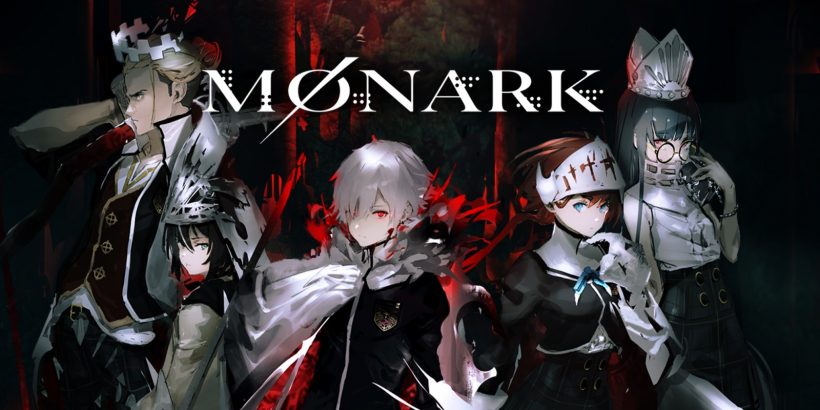 It’s not often that you get a new game made by veterans who worked on the Shin Megami Tensei series, but Monark arrives on Switch as an attempt to bring brand new ideas to the JRPG genre, even if they don’t work as intended.

It all starts with you waking up in the Shin Mikado Academy, a school that has been cut off from the external world by an otherworldly dome (think Stephen King’s Under the Dome, or The Simpsons Movie). The causes behind the dome are of daemonic nature. Basically, people with strong Egos were able to make pacts with daemons that represent the Seven Deadly Sins, becoming Pactbearers—powerful beings that can use Authority to bend the world’s natural order. Because of their actions, a weird mist is appearing throughout the school, turning people mad. As a Pactbearer yourself, your main objective is to defeat the other Pactbearers in an attempt to restore order.

Monark’s themes of creating a strong Ego to deal with daemons aren’t only present on a narrative level. In fact, at the very start, you will answer a series of questions which will be used to set your levels in each one of the Seven Deadly Sins. This will determine which daemon you will be able to summon at the beginning, and will be further increased along the campaign, with new daemons added to your party over time. This is an interesting system that may result in an easier or harder early game. Each Sin is connected to a type of unity, so you may start the game with a healer, for example. This can help you a lot at the start, but there’s a chance for you to get a character focused on buffing, or even a character that deals heavy damage to enemies affected by status conditions.

In addition to these daemonic summons, at each chapter of Monark, a new human character will join your party. As well as the boost they offer your team, these characters will also be closely linked to the game’s overarching narrative, as well as that chapter’s specific events—and that’s where both the strengths and weaknesses of Monark’s narrative lie. You see, by giving each character their own chapter, the game can explore their specific characteristics and backstories. However, due to the nature of the narrative and how most of these characters are built on top of heavily-explored anime tropes, each chapter presents a hit-or-miss self-contained story. Some are very good and interesting, as they explore dark themes and weird events. Others are bland and feel more like a drag.

In order to compensate for that a little bit, Monark presents a very interesting strategic turn-based combat system. Taking some notes from games like Fire Emblem, but ditching a grid in favour of freedom of movement, Monark builds a very deep combat system, where you need to constantly balance the risk and rewards behind each movement. The theme of getting mad is translated to combat, where you will increase your insanity meter when using certain magic skills. Once it gets to 100%, you lose control of your character, as they will attack anything near them with increased power. Used strategically, this can help you get the upper-hand in a tricky situation.

There’s also an interesting assist system that takes into account the positioning of your troops (as well as your enemies). If you attack an enemy when there’s a friend close by, for example, they will perform a combined assist attack, which can be very beneficial when dealing with the most powerful foes. The freedom provided by the lack of a grid system really helps the combat shine. However, it also creates a few nuisances, because it is very common to get stuck due to a character’s hit box, not to mention that you may find yourself unable to act because the enemy is just a smidge away from your area of action.

As enjoyable as that combat system is, Monark doesn’t make the best use of it when you consider the very limited enemy rooster. At hour 40, you will be fighting the same enemies you encountered at the beginning. They will just have fancier armour and a few new tricks. The game’s evolution system is also interesting, but problematic. Instead of a standard experience bar, you will get a currency named Spirit, which can be used both as a means to buy new items and equipment, and as a way to unlock new skills. Each ability unlocked also boosts your character by one level, increasing their overall statuses. The problem lies in how new characters always start at level one. As a consequence, getting a new character at the mid-game segment leads to a very annoying grind-fest—unless you have purposely saved some Spirit, at the cost of not evolving your team.

When you take into consideration everything Monark has to offer, you’ll see that it’s a game with countless interesting ideas to change what you would expect from a JRPG. Unfortunately, though, most of its concepts are either not used to fruition, or are executed in a sub-par manner. As a consequence, it is a game that may still appeal to a certain niche, but only if you can overcome the many barriers along the way.

With a dark story that involves daemons and anime tropes, Monark presents a JRPG experience that comes with many unique, but half-baked ideas. While it has deep and interesting combat, the other elements are either badly implemented or underdeveloped.