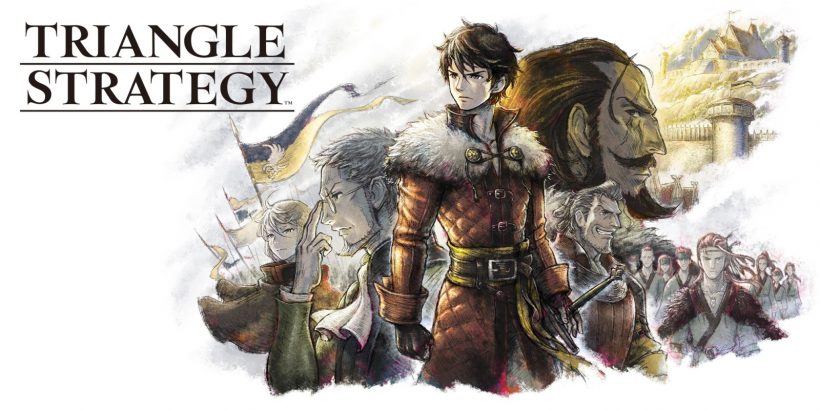 I often question how much time I should afford a game to determine whether it hooks me. Games are a massive investment, both in terms of time and money, so it’s natural to not want to waste your time. Some games do it in an instant (looking at you Breath of the Wild) whilst others take a little more time for that wow factor to sink in. Triangle Strategy falls into the latter category. Weaving an intricate and intriguing tale of political strife, Triangle Strategy takes its time hitting its stride, but once it does, you’re treated to one of the finest tactics-based RPGs ever made.

How invested you are in Triangle Strategy’s story will determine how invested you are in the game as a whole. There are many titles where the story is supplemental to the experience, but in Triangle Strategy’s case, it’s unlikely you’ll enjoy the game without it. You play as Lord Serenoa, ruler of one of the great houses of the land of Norzelia, currently experiencing an uneasy yet welcome period of peace. It’s not long before various schemes fall into place and that peace is torn asunder, forcing you and your band of trusted allies to navigate the murky depths of war.

It may sound a somewhat generic story, and in some ways it is. However, it’s nonetheless intriguing. The game takes plot points typical of the genre and places them in the context of a mismatched group of characters that you don’t want to see fail. Mere hours in I was attached to certain characters, while there were others I hoped to one day see join my team. However, it’s not long before you realise this world cares not for your wants. Triangle Strategy pulls no punches in the story it tells, and it’s this realistic, ruthless attitude that affords the game much of its excitement.

The only issue is how long it takes to get there. The first several hours of Triangle Strategy are as much a test of patience as anything else. With such a complex world to introduce, the level of exposition in those few hours can be grating, especially as it comes at the expense of actual gameplay. I found myself itching for a fight that seemed destined never to come. This is my main gripe with the title, and I think it even has the potential to turn people off the game. Given that this is the portion available in the demo, it’s a shame that it doesn’t do a good enough job of showing people why they need to invest their time in the game. As the story opens up, so does the gameplay, and Triangle Strategy reaches new heights, it’s just unfortunate it takes a bit too long to find that point.

Story really is make or break for this title, yet the gameplay holds equal weight, and thankfully this is where Triangle Strategy truly shines. I count myself a big fan of tactics games for the level of complexity they offer, and Triangle Strategy stands tall with the greats of the genre. It’s truly impressive how deep the mechanics of this game run. From the off, you have to consider every aspect of your units’ movements, from starting position on the battlefield, to the direction they face at the end of their turn. It’s a lot to keep track of, but the game gradually introduces these elements to you so as not to overwhelm you. There are also myriad training battles for you to hone your skills.

The first mechanic to really strike me was how critical hits work. Any unit, be it friend or foe, gets an automatic critical hit if they strike from behind. It’s an obvious mechanic when you think about it, but one that forces an extra layer of consideration. End your turn with your back to a wall and you’ll be safe; however, you might then be further away from your target. It’s all the little things in Triangle Strategy that really add up. For example, Ice magic can be powerful, but it causes the ground around the attack to freeze, slowing down allies as well as enemies. Meanwhile, certain abilities may be tempting to use straight away to deal the max amount of damage, but you’ll then need to wait for your ability counter (TP as it’s called) to recharge, leaving you potentially short against a more powerful enemy.

There’s so much to consider in Triangle Strategy, and so many unique characters to consider it with, that no two battles are ever going to be the same. This sheer variety is invigorating and lends weight to the idea that your every decision is affecting the world around you. In tandem with the conviction scales that measure each decision you make, influencing your relationships as well as the story, Triangle Strategy does a brilliant job of making you feel a part of its world.

There’s so much I could say about Triangle Strategy, almost all of it good. The HD-2D graphics are gorgeous as ever and add a certain sheen to what could have otherwise been a fairly drab world, and the title features full voice acting that was a welcome addition even if some of it sounded a bit lifeless. This is simply a truly stunning experience, so hold steady through the slow start and you’ll be treated to a defining game of its genre.

Triangle Strategy is one of the most polished strategy RPGs out there. Although it doesn’t reinvent the genre, it refines its mechanics to a point of near perfection, wrapping them within a riveting story that just takes a little while to get going.