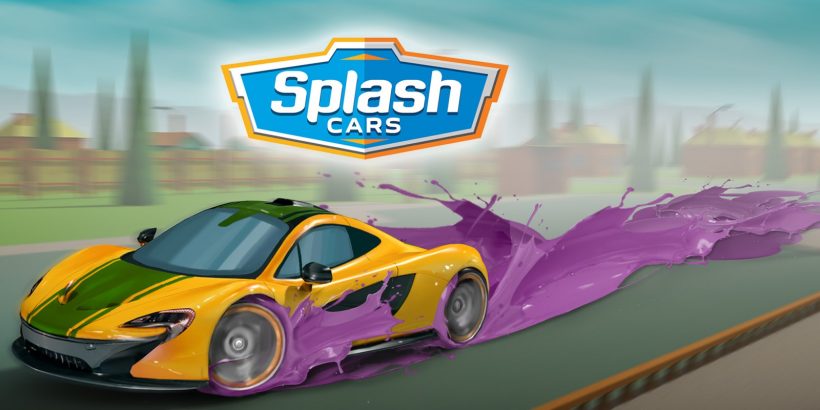 Splash Cars is a simple game. In it, you control a car with a paint-spraying exhaust, and you’re tasked with colouring in as much of the level as possible before running out of fuel. Police cars will chase you down, and collectible power-ups give you a chance to fight back. Fuel pick-ups will keep you driving for longer, and coins can be earned to purchase better cars or extra lives.

On the surface, it’s a fun time if you’re looking for something casual. It’s basic, but not so brainless that it becomes boring. However, when you look beneath the surface a couple problems start to show themselves.

Splash Cars has a lot of similarities with the de Blob games. These titles went for a similar vibe, where you colour in a grey world and fight back against monotony and authoritarianism. It’s a bit unfair to compare them in full, as one is a much bigger game, but Splash Cars lacks the freedom and joy those games revelled in. It’s clearly not trying to be anything more than a simple time-waster, and that’s a bit disappointing when the concept is this solid.

It’s also clear that Splash Cars is a mobile game port. This is evident when you look at the various currencies and in-game shop. Thankfully, there are no microtransactions here, but it’s still a bit of a mess.

There’s a three stars system on each level, based on how much paint you splatter around. For example, painting 50% of the level might get you 1 star, while 70% might net you 2 stars and so on. However, one level might demand you finish 60% of the map to move on, while another might ask for 85%. This can get pretty annoying when you run out of fuel at 83%, and with random fuel placements, it often feels like trial and error in some of the bigger courses.

And while it is satisfying to slowly bring colour into this drab, depressing world, the world itself is still bland even after you paint it. Every level looks identical and the music never changes. A couple new mechanics are introduced, like bigger, faster police cars, but these don’t actually improve the gameplay much. This leaves Splash Cars feeling very samey, and it only remains fun for a few levels at a time. There’s really nothing to distinguish each level aside from the size of them.

It would have been cool to see more varied locations and colours. Maybe a coastal town, a bustling highway, or a more complex city. Instead, it’s just repetitive neighbourhoods with the same few buildings copy-pasted throughout. The only real variety on offer are the power-ups you unlock, which are admittedly fun. One turns you into a tank, another boosts your speed, and one gives you a magnet to collect things with. It’s not enough to keep you hooked for hours, but it does make the gameplay a bit more exciting.

The game’s problems seem less severe when you look at the price tag, though. Splash Cars is a small, cheap game that’ll keep you playing for a few levels at a time every so often. To some, that’s all they’ll need it to be, and that’s ok. So if you’re looking for a short dash of fun, you can do worse than Splash Cars. If you’re looking for more variety, might be best to steer clear.

Splash Cars is a simple game let down by a lack of variety. It’s short and cheap, and won’t leave much of an impression on most players. Still, there’s a decent amount of fun to be found here.