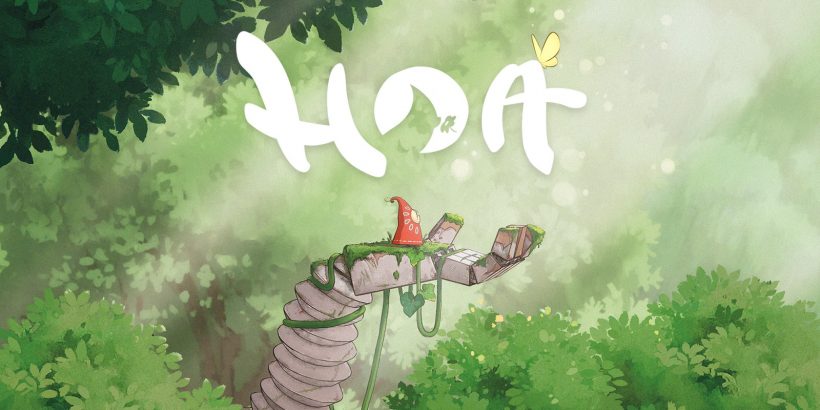 Hoa arrived on Switch back in August last year, but it passed us by the first time around. However, we couldn’t ignore a physical copy dropping through the Switch Player letterbox, and Hoa is certainly a game to make a good first impression. With a stunning illustrative style and a dreamy, wonderland setting, Hoa does a very good job of putting on a front that, unfortunately, isn’t backed by quite the same depth of gameplay underneath.

First up, it’s important to note that this is a plain boxed package with no manual or collector’s edition style goodies. But that doesn’t hold me back from recommending this physical format, because Hoa is suited to it in more ways than one. A short game, Hoa leaves an impression that you’ll want to relive from time to time. It’s definitely best tackled in one stretch, without the distraction of more involved games to break up your enjoyment.

Beginning with a cutscene set on a gorgeous stretch of crystal blue water, Hoa’s bright colour palette and mesmerising renditions of nature will no doubt bring inevitable comparisons with the work of Studio Ghibli to mind. Those initial environments set a very high bar, and the game makes no excuses for going all-in on its presentation. The creators clearly had a single-minded vision here, and Hoa certainly achieves what it sets out to do in terms of visual appeal.

The game’s piano-heavy soundtrack is a delight, too. Slow, calm, meditative, it helps reinforce the overall feel of a peaceful, friendly world, albeit one with its own darker secrets to uncover. The score is punctuated with subtle background sounds of nature — birdsong, pretty much— and I found it neither intruded nor annoyed at any point. There’s a light story here, of sorts, but the overall effect is more of a basic picture book than a challenging plotline.

So what of Hoa’s gameplay, and why am I taking so long to even begin describing what this game is actually about? Well, therein lies the crux of this review. Hoa is a game with an emphasis on style over actual gameplay. Ostensibly a puzzle platformer, the opening few levels (of eight) are practically a walking simulator, as the pace starts glacially and doesn’t pick up much from there. One of the main early NPCs is a snail who follows you so long as you’re not too far away. It’s designed to slow you down to a crawl, so you’ll take in the environment, the background animations, and the lushness of it all.

Each area consists of a small number of screens containing a couple of types of objects you’ll need to interact with in order to continue. It’s really a case of working out how to access all areas of the level before proceeding. One of the cleverest design choices is that almost every level guarantees an ability upgrade; in that sense, the pace picks up a bit. Hoa definitely packs a lot of variety into its miniature frame, although there’s not a great deal of heft behind any of it.

Hoa is a very gentle game. Nothing in these lands will kill you, and there isn’t even really any way of going wrong, so no required resetting and starting a puzzle again from scratch. Of course, this helps to underpin the chilled atmosphere, but it also does emphasise the feeling that this is a — very attractive — demo. The puzzles really are very simple in the extreme, although they thankfully get a tiny bit more challenging towards the end. Hoa seems to be targeted at either: adults who are very in touch with their inner child, those who relish the thought of an entirely stress-free game, or anyone just starting out playing platformers.

As I strolled through Hoa’s world, I couldn’t help but feel a little underwhelmed, which isn’t a feeling I expected to emerge from these magical lands so beautifully presented. Yet, just at the moment it was starting to close out, Hoa threw me a bit of a curveball that went a long way to rescuing the experience. I don’t want to spoil the surprise, but Hoa’s final level has both a stark, stunning setting and a much-needed abundance of proper, good old-fashioned platforming. There’s still no jeopardy, and the pace remains slow, but there’s certainly a hint of invention and experimentation here that goes beyond what the rest of the game provides.

Hoa is a great choice for a physical pickup, despite it being an indie that has gone quite far under the radar. It’s the kind of game you might forget about until many years from now, and then have a fantastic, nostalgic rediscovery of it.

My advice: treat Hoa like an event; a short event, but a meaningful, focused one. Devote a few hours one weekend evening to popping open the box, snapping in that cart, and indulging in a self-contained bit of escapism.

Numskull Games’ physical edition of Hoa is now available for purchase on Nintendo Switch in the UK and EU.

Hoa is short and, at times, you’ll be forgiven for forgetting you’re even playing a game. That’s not all bad, though: Hoa gives you room to breathe, to escape into its spectacularly-painted world for relaxation rather than challenge.