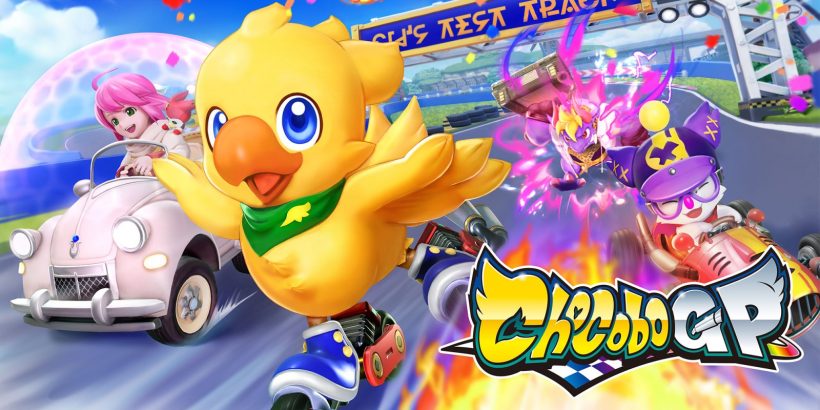 Swapping turn-based combat for kart-based combat, Square Enix has taken the much-loved franchise known as Final Fantasy and adapted it into its very own Mario Kart-like adventure; Final Fantasy Kart, if you will.

The questions on everybody’s lips are: is it something that is needed? Is it enjoyable? And finally, is Chocobo GP a worthy contender against Mario Kart? Sadly, the answer to the latter is no, not right now. But it could be in the near future if changes are made. Let’s get into it, Kupo!

Chocobo GP is a party racing game that allows players to race as some of their favourite Final Fantasy characters from across the series, as well as the Chocobo series. Similar to Mario Kart, players can collect and use various power-ups, abilities, and spells in order to knock their opponents out of the way and ultimately take first place.

Collecting these power-ups is simple. As you’re racing you will see objects that resemble trophies in gold, silver, or bronze, each giving you a random ability. You can also stack them for an even more effective power-up, which is super helpful when you’re lagging behind.

Whilst racing around the racetracks (which are inspired by locales from both the Final Fantasy and Chocobo series) you will also come across blue gems known as Magicite. Collecting these will allow you to unleash powerful spells to flummox your opponents. Each character has a different spell and this can range from shooting fireballs to stopping your opponents dead in their tracks with a whirlwind, allowing you time to get ahead. Stacking Magicite will allow your spell to become more powerful so use it strategically.

It’s worth noting that there are technically two versions of Chocobo GP you can download; a free lite version, as well as the paid full version. The lite version gives players a small insight into what to expect from the game, very much like a demo. You will be able to partake in the 64-player Tournament Mode as well as experience the Prologue of the story, but for anything else you’re going to have to purchase the full game.

The game has a pretty interesting story mode, with fully voiced characters. It tells the tale of Chocobo and friends competing in a new racing tournament which would allow the winner to wish for anything they should desire. Playing through the story mode is where the majority of the game’s characters and content are unlocked. If you choose to not play the story at all (but, why wouldn’t you? It’s a lot of fun) you will miss out on nearly all the characters that are available to you in the game.

Chocobo GP does have a lot of game modes to keep you clocking up the hours, so to speak. Obviously, there’s the story mode which will provide you with 10 chapters of goodness. There are Time Attacks to work through, Series Races; and the 64-player Tournament Mode, an intense mode that pits groups of eight (online) players against each other across several rounds. It gets harder as you progress onto the next round – if you do – and you can nab yourself some cool goodies for getting the top spot. This is the mode I found myself playing most as I found it addicting and a lot of fun.

The gameplay itself is okay; you have the usual kart racer controls and mechanics which allow you to drift around corners to gain speed, as well as boosting at the start line and over jumps. My one issue was simply that the karts didn’t feel as responsive as I would have liked. They would often feel too sensitive to move, almost like they are floating with no real weight behind them, no matter which character or kart is chosen.

There is a ‘Battle Pass’ like element to Chocobo GP, which I know many people aren’t a big fan of, but I did enjoy this aspect as it gave me more reason to keep playing. But the fact that one of the series’ most sought-after characters, Cloud, is locked behind a high level of the battle pass is disheartening. You do need to pay in order to unlock the Pass, but with the purchase of the full game, you will get yourself enough currency to unlock the first season at least.

At the time of this review, an update had already been provided by Square Enix which made gaining EXP and currency a lot easier and quicker but you will still find it incredibly grindy.

One of Chocobo GP’s biggest downfalls is with its Micro-transactions, packed full of in-app purchases and paid unlockables. There are three different currencies in the game which can get incredibly confusing; Gil, Tickets, and Mythril. All are used to purchase different items which just leads to the whole title feeling like a mobile game, rather than a full-priced Nintendo Switch release. Mythril is the real-paid ‘premium’ currency and with it being reported that this currency expires if not used within 5 months, there’s reason to be unhappy.

Hopefully, Square Enix can amend some of these issues because, underneath the annoying grind and harmful micro-transactions, Chocobo GP has all the potential to be a great game.

Overall, Chocobo GP has a lot to offer players, but the sheer amount of in-app purchases and popular characters being locked behind a paywall is frustrating after buying the game itself. It has potential, but these issues need sorting.