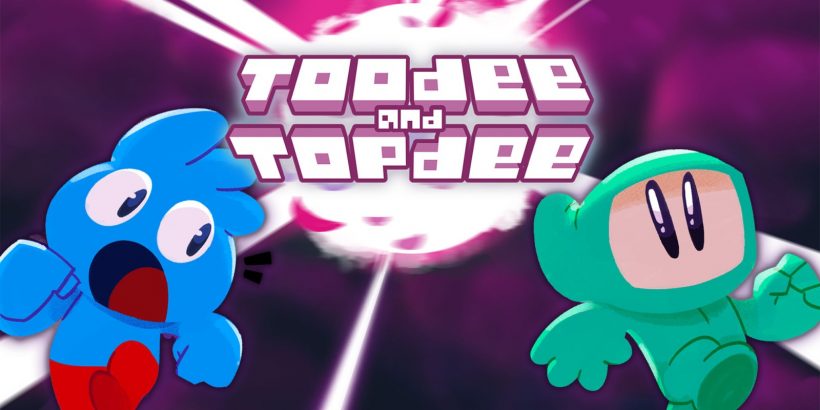 With as many games as there are on the Switch, or indeed in general, it amazes me that after all this time I’m still finding fresh, new experiences to enjoy. In an industry where sticking to well-known IP and playing things relatively safe is the norm, it’s refreshing when an Indie developer emerges with an exciting idea that strays far from these ideals. Toodee and Topdee does exactly that and more, wrapping an inventive puzzle-platformer within a unique premise that sets it apart from the crowd.

The story of Toodee and Topdee is one of basic universal calamity. After the theft of the all-powerful and space binding Semicolon, the worlds of Toodee and Topdee fall into disarray, and thus the puzzler’s unique premise is born. The game has you shift between two different perspectives throughout, each vital to solving the myriad puzzles on offer. From Toodee’s perspective, the game functions as your traditional side-on 2D platformer. Shift to Topdee’s perspective and (surprise surprise) the game switches to a top-down view. Suddenly, what was once the sky for Toodee becomes the floor for Topdee. It’s a simple idea, but its execution to near perfection is what really sells it.

The interesting level design possibilities that stem from such an idea are on full display from the offset. The game eases you in with a few basic levels that allow you to grasp the controls, but it’s not long before the difficulty ramps up and you’re faced with some rather mind-melting scenarios. Each world introduces a new kind of obstacle to make things that bit harder. From wild animals to the very elements themselves, each new challenge strives to hone your puzzle-solving abilities. By the time you reach the final world, all your knowledge is put to the test, and it evokes a sense of progression that’s hard to beat. There were instances where I found past puzzle solutions were suddenly part of the answer to what I was solving now, and given the game’s relatively bitesize nature, recalling information wasn’t a struggle. It’s that sense of coalescence that’s present in the best puzzle games, and Toodee and Topdee really makes you feel as though you’ve earned the win as the credits roll.

Whilst I enjoyed the puzzle-solving elements of the game, the platforming sections didn’t feel quite as well crafted. They’re baked into the puzzles so it’s all contingent on how the platforming works with them. However, I feel like there could have been more opportunity for these moments to stand out. Many of the levels felt more reliant on the top-down perspective for a solution, with the platforming moments feeling more about jumping in the right place at the right time. It’s well utilised with respect to the puzzles on offer but, as a result, playing as Toodee doesn’t feel quite as important, and I found myself enjoying my time as Topdee that much more.

Toodee and Topdee genuinely feels like a genre-defining title. Whilst that’s more in respect to the puzzler side of things, it still utilises its hybrid nature to good effect, producing a challenging game that should stand proud in any Switch owner’s library.

Boasting a unique premise that stands out from anything else in the genre, Toodee and Topdee is a challenging delight to play. Brimming with charm and with clear potential to build on its slight shortcomings, Toodee and Topdee are a duo I’d happily see again.