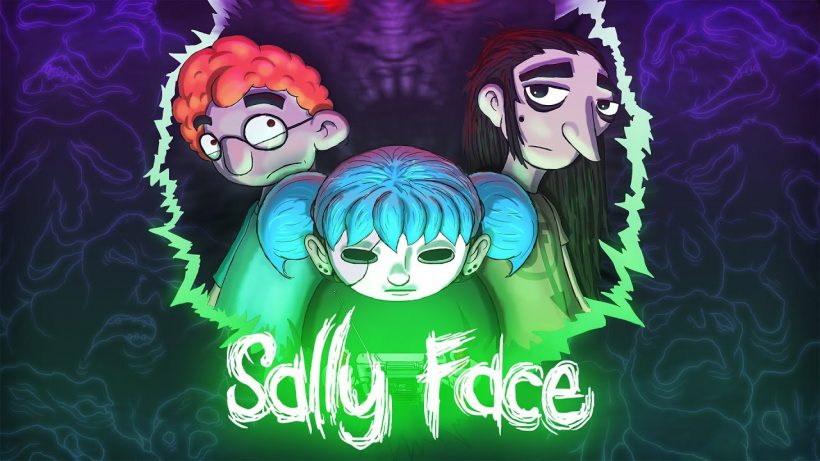 Point-and-click adventure games tend to do two things. First, they tell a compelling story that keeps you guessing throughout its run time. Second, they use engaging puzzles to work around their simple mechanics and help you remain enthralled by the world they’ve built for you to explore. Super Rare Games were kind enough to send over a copy of Sally Face, which manages to do both of these things. Despite feeling distinctly unpolished, everything seems to be intentional, leading you to believe that anything you see that doesn’t look quite right is part of the aesthetic of a gameplay feature in some way you don’t yet understand.

Sally Face tells the story of Sal, a young boy who lost his sister when he was younger and wears a prosthetic mask. Over the course of six episodes, you unravel the mystery of Addison Apartments. Sal moves there with his fairly absent father, and it’s clear from day one that something sinister is afoot. Each episode delves deeper into the twisted lives of those that occupy the building, though you always end up questioning just how much of it is misinterpreted by Sal or made up for want of finding a solution where it seems there isn’t one.

If you like wacky stories that take sharp turns right up until the end, Sally Face is a good game to get stuck into. The pacing is just the right side of slow thanks to some complicated puzzles, but you never feel like the game is taking too long to get to the next beat. On the contrary, it feels like you’re too dense to solve the current puzzle and you end up frustrating yourself because you want to know what happens next.

The episodic format works well because the story is framed in such a way that flashbacks and time jumps make sense. Each episode stretches on for long enough without overstaying its welcome so you can comfortably get through it in six small sessions if you want to. With an overall runtime of around 9 hours, it’s quite a lot to smash through in one go.

Sally Face has a decent narrative that keeps you engaged, but the other half of the game that you’ll thoroughly enjoy is the point-and-click puzzles. While the story drives you forward, it’s definitely mostly there to push you into completing the next puzzle. These can feel a little forced, however, and there are times when the game deliberately prevents you from progressing even though you might have figured out what to do, but the gameplay is good overall.

Puzzles generally require you to perform a simple task by completing a series of much more complicated ones. For example, one puzzle requires you to get a ghost to talk to Sal’s friend. To do this, you need to upgrade his handheld gaming device, the Gear Boy, by scavenging items and having someone put them together for you. Then, explore the building and get as many other ghosts to appear as you ca,n so that you can acquire new knowledge to get the final ghost to show up.

Every puzzle is as convoluted as this one, but they feel much more challenging because of the way items and interactable objects are highlighted. Most objects you can interact with will have a prompt show up as you walk past them. However, some don’t, so it’s down to you to hammer the A button in certain areas until you find what you need. For example, to upgrade the Gear Boy, you need an antenna. I was sure this was linked to a stereo because it was the only piece of technology I could interact with. However, a nearby radio is the correct object you need, but it has no prompt.

Solutions like this feel cheap and they’re indefensible. You can’t have one rule for some items but then abandon it for the sake of challenge. If this was a glitch, it’s less egregious, but I feel like these instances were deliberate attempts to make something arbitrarily difficult, and it never made me feel smart as good puzzles do.

The main reason I haven’t been able to put Sally Face down or stop thinking about it is because I keep thinking about the deeper meanings behind many of the core concepts. For example, Sal is a boy wearing a prosthetic face. Through dream sequences, we’re shown his innermost thoughts and fears, all of which, at least to me, revolves around keeping people at arm’s length. He’s afraid to let anyone know the real him, which is why he not only wears a mask but also puts his blue hair in pigtails that, if you didn’t know any better, could make him look like a girl. I think he’s trying to hide in more ways than one, throwing up so many barriers to even approaching him for a conversation that he can simply drift through life by himself, never needing to worry about someone finding out who he really is.

This game is great in so many ways, but it’s certainly not for everyone. If you enjoy a darker story and want some meaty puzzles to get stuck into though, it’s one for you.

Sally Face is packed with interesting puzzles that evolve throughout each episode in a way that keeps you engaged without dragging on. While there’s definitely a level of jank to the title, it feels intentional and adds to the atmosphere.