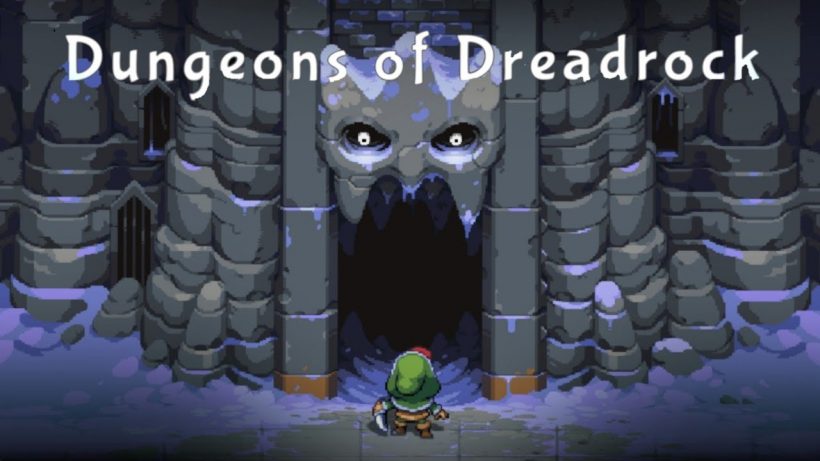 On the surface, Dungeons of Dreadrock looks a lot like an old-school fantasy adventure game. However, give it a chance, and you’ll see there’s a depth to its gameplay that’s as surprising as its 100 hand-crafted levels.

The story of Dungeons of Dreadrock sees a young girl venture into a cave in search of her missing brother. I won’t spoil it here but there’s a lot more going on than is first hinted at, and as the layers peel back it makes the game’s world feel a lot fuller and more alive than it is to begin with. The same is true of the gameplay. Each of the 100 levels is a dungeon made up of tiles. The protagonist can move one tile at a time, and enemies follow the same pattern, though it’s the speed at which enemies can move that differs. You must work your way through each level to the staircase that leads to a new one below. Instead of being a hack and slash affair though, this game is far closer to a puzzler.

At first, you’ll simply have a knife and your character’s feet with which to solve a puzzle. Kill an enemy, use the key it held to unlock the path forward, and repeat. However, new mechanics are gradually introduced that make subsequent levels more challenging in unexpected ways. For example, a large unkillable troll breaks the rules by following you between levels. Later, portals are introduced, providing you with an advantage that is switched to the enemy’s favour later.

The complexity of a level is never so much that you’re stuck without a solution. The game offers hints for solving a level once you’ve been on it for too long, but they’re always optional and split up. This way, you can get a hint to get you started and figure the rest out for yourself if you wish.

The game always feels interesting to play because mechanics are never overused or left unchanged for too long. There’s always something new being added or subtly changed, and combined with a new element that makes the whole thing feel like more of a long quest rather than a series of 100 dungeons.

It’s not all fantastic though. Dungeons of Dreadrock is a port of a mobile and PC title, and the controls haven’t been developed as well as they could. The game supports Pro Controller and Joy-Cons, but either way it’s very difficult to move your character using the directional buttons or the joysticks. If you used the directional buttons, your character moves slowly and gets killed more often. Use the joystick, and you’re opening yourself up to random movements and incorrect directions. Some of the notes could also have been improved so that they appear crisp on the Switch’s screen, but that really is nitpicking.

Overall, Dungeons of Dreadrock is a surprising title. Its hidden depths are well worth plundering for the fiendish puzzles you’ll find inside. The monster designs are inventive and somehow a coherent world is portrayed through pathways inside an evil-infested cave system. Furthermore, the added accessibility the hints provide means that a level is never impossible, and every player will see the ending.

Dungeons of Dreadrock doesn’t do anything substantially new but manages to feel interesting and unique because of the way each level has been hand-crafted, carefully considering the interactions between the few mechanics at your fingertips.