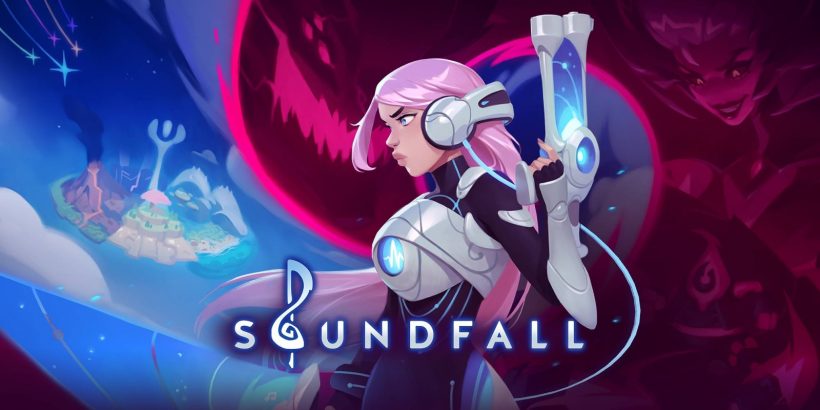 In Soundfall, everything is music. You battle across Symphonia, a world swarming with sound. The characters attack with music-based weapons, and the enemies are called “Discordians”. The trees dance to the music and the rocks are shaped like piano keys.

And if there’s one thing I love, it’s when media is able to incorporate music and sound in interesting ways – whether it’s creative use of music in film or a song that kicks in at just the right time to drive gameplay forward. Soundfall is built entirely around that premise. Everything you do is enhanced if done in coordination with the beat. Your guns are stronger, your dashes are more effective, and you gain more points at the end of a level if you stay on beat the whole time. It turns every level into a rhythmic dungeon-crawl, where playing in tune with the music is key.

It should be a great time. Especially for me – someone who loves all kinds of music, and would happily slot video game soundtracks into my everyday playlists. And in some ways, it is. It’s thrilling to get a chain of kills perfectly in time with an up-tempo tune. It’s fun to navigate the colourful battlefields and clear each wave within them, and it has co-op play too. But Soundfall doesn’t always hit the right notes, often falling into repetition.

Each world is differentiated by genre. For example, the first world is all upbeat pop/dance tracks, the cityscape is alive with synths and the volcano is defined by raging metal. These themes are neat, and it’s fun to see what each world has to offer. Sadly, it’s never very long before you realise how samey these worlds are.

Typically, there are 10 levels in each world with a few bonus ones. Most of these are indistinguishable from each other. Once you’ve finished the first level in each world, you’ve seen most of what it has to offer. One level switches things up by giving you new abilities for characters, and one has a more chaotic horde-mode feel, but outside of these, the levels feel practically identical. It’s too predictable, which is disappointing considering they’re the bulk of the game’s content.

Enemy variety leaves a lot to be desired too. The levels are repetitive, and the enemies aren’t much better in that regard. By the time you’ve finished a few levels, you’ve seen a lot of what the game has to offer. It feels like the game throws a few too many enemy types at you from the jump, leaving later worlds with less to surprise you with.

But in a game like this, the soundtrack is obviously one of the most important factors. The music and the gameplay work in tandem. Everything could fall apart if the music isn’t fun to shoot to. On the other hand, the soundtrack could elevate this game into must-play territory. So how good is it?

Well, it’s alright. There are a lot of artists making an appearance here, but none of the songs left much of an impact on me. Some of them suit the fast-paced combat better than others. Songs with faster BPMs are easily the most enjoyable to play. Slower songs tend to feel a bit less exciting, which doesn’t do the gameplay any favours. However, fast songs are pretty chaotic to keep up with, especially when the levels are full of visual noise on harder difficulties.

The gameplay is pretty standard twin-stick shooter action. You’ve got two weapons you can switch between, unlockable special abilities and an evasive dash. That’s about as complex as it gets, but it’s all the game really needs to be fun. There’s no denying how satisfying it is to blast a horde of enemies away, matching every shot to the beat. The weapons are fun too, ranging from “sixteeners” which shoot sixteen shot bursts, to scattershots which fire off close-range blasts.

After a while though, the excitement starts to wear thin. The music is decent enough, and it’s nice that each world has its own style. But it’s difficult to shake off the fact that this version of the game is missing a key feature. The Switch doesn’t allow you to import custom songs. I would have loved the chance to jam out to my own song selections, and the inability to do so makes this game feel like an inferior version.

And then there’s the story. To be frank, the narrative is skip-worthy filler and offers little to the game. There’s a colourful cast of characters, most of them based around some kind of musical pun. Sadly, none of them are interesting or funny, so eventually I took to skipping dialogue so I could get back into the action.

If this sounds like a highly negative review, it’s only because I was hoping for more from this title. The premise is so appealing, and I love when games incorporate music in ways that enhance the gameplay. Soundfall is built around that premise, and yet it feels like a lot more work could have gone into refining that concept. If you’re a fan of music-based video games, there are better options out there than Soundfall. The shooting can be fun in short bursts, and the soundtrack has some enjoyable tracks, but it doesn’t do anything exceptional.

Soundfall might sound pretty great on paper, but the execution could have been better. It’s missing the creativity that could have elevated it to greater heights. What we’re left with is a promising shooter that falls into repetition disappointingly often.