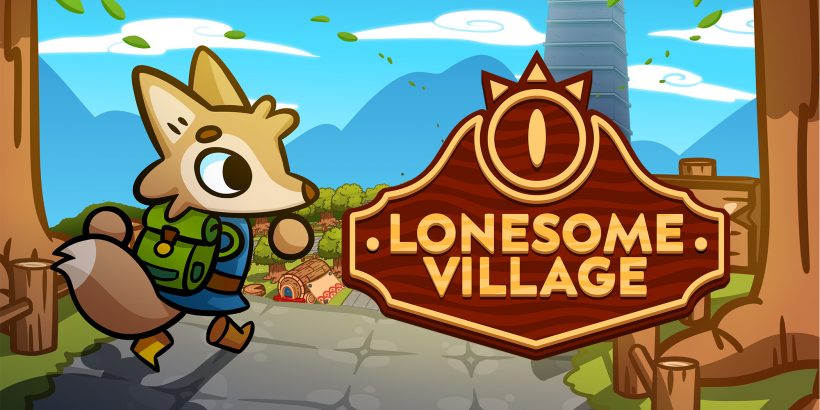 With a plethora of cozy games available on the Nintendo Switch, it can be hard for smaller titles to make a name for themselves and go up against some of the best in the genre. Newer titles need to offer something unique that allows them to stand out. Lonesome Village may not quite achieve this, but it’s still a fun time nonetheless.

Lonesome Village is an adventure/puzzle/simulation game that sees players take the role of Wes, an adorable coyote looking to make a home for himself in this once-thriving village. Unfortunately for him, things aren’t that simple, and after the opening cutscenes, you realise that everything isn’t what it seems, with many of the town’s former residents now missing. Wes will soon be tasked with bringing the village back to its former glory, and as you might imagine, that’s no easy feat.

The gameplay is made up of a combination of adventure, puzzle-solving, and simulation elements, with the game expanding more as you progress. It’s got to be said from the off that if you’re not a fan of puzzle games, then this may not be one for you. A significant portion of your time will be spent solving puzzles, working your way up the rooms in a mysterious tower, and releasing the trapped villagers as you do. It’s a pretty simple premise and features a very repetitive gameplay loop of entering a puzzle room, completing said puzzle, which then allows you to release a captured villager back to town; that villager will then reward you with a heart used to unlock more puzzles. Rinse and repeat.

The puzzles themselves don’t offer much of a challenge, with the majority of them having simple solutions. I had expected the puzzles to start off simple and progressively get more difficult, but this wasn’t the case, which was a little disappointing. Although, there is no hint system for puzzles, so if you did happen to struggle, you’re entirely on your own.

A variety of puzzle types are on offer here, ranging from memorising sequences to sliding shape puzzles. You will have to figure out how to solve these puzzles on your own as there is nothing explaining the goal here, though more often than not, the solution is more straightforward than it appears. I often found myself overcomplicating a puzzle, which only made me feel more accomplished when I figured it out.

There is no combat system here, so an essential part of the game is the community aspect and village life, similar to the likes of Animal Crossing, although not as in-depth. Instead of giving you access to everything at once, though, Lonesome Village allows players to unlock new equipment as they progress. This means the game starts pretty slowly, but you will very quickly open up more things to do and never become overwhelmed with the sheer amount on offer. The ability to fish and an instrument that enables you to perform different actions depending on the tune you play encompass just some of the items on offer.

Building a community is equally important. As you rescue the villagers and things start to grow, you will be required to perform various quests and tasks for them, not only to get coins but also to build your relationships. The only frustrating thing for me here was that there were no apparent signs that a villager had a quest for me; the only way to know was to talk to every character you encountered, and even then, there was no way to track the missions you had. So, if you have an awful memory like me, expect to be doing a lot of back and forth.

Everything in Lonesome Village is designed to convey a relaxed atmosphere. There’s no requirement to eat, drink or sleep, the town’s shops have no opening and closing times, and everything can be done with the simple click of a button. Want that fish? Sure, just press ‘A’! That being said, a few mechanics could use some work to be more effective. There is a full day and night cycle for example, but the only purpose this seems to serve is that you can find specific items at night.

Where Lonesome Village really excels is within its art style. It’s very cartoony and childlike, but it is absolutely gorgeous; with a lot of detail and vibrant colours, it’s incredibly fitting of its cosy persona. The world and everyone in it are designed exceptionally well, and although the game is pretty linear in its approach, the same doesn’t apply to its character design.

I can’t say that Lonesome Village offers anything different to what is out there already, but what it does do is bring a light-hearted and relaxed adventure to Nintendo Switch that is sure to bring a few smiles. It’s a little shorter than I would have liked for its price point, but the roughly 7-hour play time left me feeling incredibly zen afterward.

Overall, Lonesome Village succeeds at what it sets out to do. It doesn’t do anything unique, and it isn’t without its flaws; if you’re looking for something that offers a relaxing, chilled experience, then this one is for you.