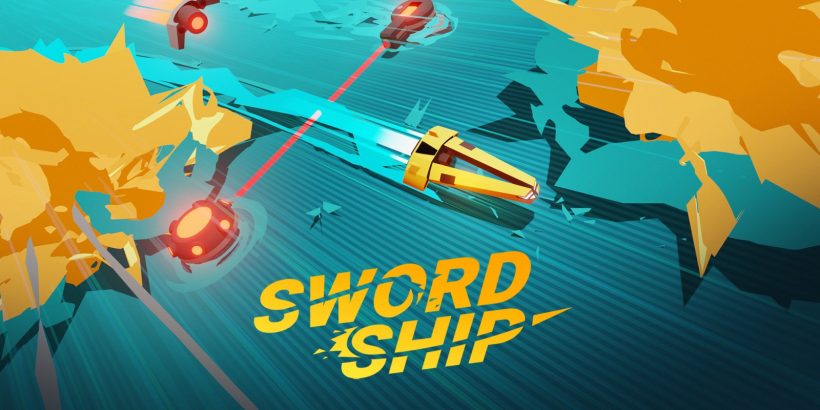 In the parcel delivery business, every second counts. There are targets to be met and deadlines to hit, but the deliveries that take place in Swordship have an additional sense of urgency. As your craft — reminiscent in appearance to the slender machines of Wipeout  — zips along with its cargo in the hold, a second or two of delay can result in death and a return to the beginning of the level. Unlike Wipeout, this isn’t a race, and your vehicle is skimming the water’s surface rather than hovering over ground. Using an almost bird’s-eye view in which the vehicle travels down the screen rather than up (a viewpoint that is used little in video games; it took me a while to think of examples that I’ve played, before remembering the 80s Atari arcade game Toobin’), the player guides their craft across the water while avoiding turrets, mines, and other obstacles.

There are Roguelike elements to gameplay, in that each new run resets to the beginning, but with the benefit of any ship modifications you’ve acquired through reaching target high scores. Scoring is achieved by performing death-defying manoeuvres and destroying enemy units. Your vehicle has no weapons of its own, however, so the latter objective can only be achieved by coordinating a chain of events that results in your foes obliterating each other. The gun turrets for example take a few seconds to align their laser, based on your most recent position, so if you can swerve your craft towards a turret, wait long enough for another turret to line up its shot, and then at the last moment dive beneath the water’s surface, one turret will destroy the other. Alternatively, if you veer towards a proximity mine, it will beep for a few seconds before exploding, but will in turn destroy anything else in its radius. The trick is to learn what each enemy type does and utilise quick reflexes to use them against each other.

Amongst all this, there are containers to collect and deliver. Depending on what is happening on screen at the time, it’s not always easy to grab every container and deliver it to its designated spot, but getting as many as you can provide levelling up options at the end of each level. Each container can either be invested as a score boost (to help you reach the next tier of unlockable content) or they can be spent on additional lives.

Aesthetically, Swordship is absolutely stunning. Visually, everything has been crafted with striking minimalistic efficiency, accompanied by a smooth frame rate. The ships themselves are slick, the menu system is punchy and attentive to the “just one more go” urge, there’s an adrenaline-fuelled soundtrack, and even the typography is perfect. Add the fact it’s a refreshingly original concept for which it’s hard to pin down any obvious influences (except as mentioned previously, perhaps Wipeout, albeit only to the extent of the vehicle design) and it’s easy to recommend Swordship. Ultimately, it’s a game that invests its thrills in chasing high scores. It’s not easy, but it’s more than worth the ride.

Swordship is fresh in concept and design, a thrilling ride that has been crafted with real attention to detail. It’s certainly a challenge, but nevertheless a rewarding one, with an addictive grip that is hard to resist.