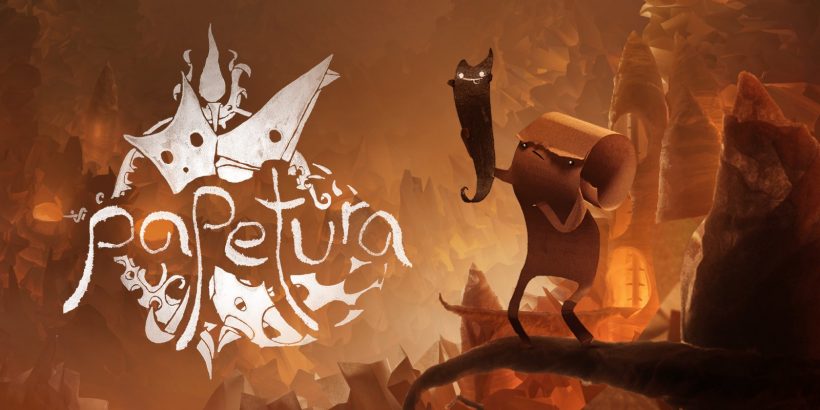 Video games often like to stray outside the realm of pure entertainment and flirt with the distinction of ‘art form’. Titles like Gris, Fez, and Hoa wow us with their visuals, storylines, and exploration-heavy focus perhaps more than their core gameplay. By creating worlds that are gorgeous and pleasant to inhabit, these ‘artcore’ games encourage us to forgive a slower-paced or simply easier challenge.

Papetura’s visuals are undoubtedly captivating, with something of a sinister edge to them. The dark brown tones certainly add a foreboding atmosphere, with details from paper cut-outs helping to ground the setting; we’re a far cry from the world of Paper Mario here. Light and animation are used to great effect, often as part of the puzzles. Apparently, all game assets were first created as actual physical paper constructions before being photographed and incorporated as digital assets.

Early on, you’ll acquire a projectile-firing ability, much in the same vein as Yoshi’s Island or Helheim Hassle. You can lob what look like tiny bugs at various obstacles, first from a basket in your possession, then later from your companion, Tura, an eel-like feline creature. Some targets will respond by lighting up or just getting out of your way. Apart from a generic ‘interaction’ command, this completes your limited moveset.

Papetura is a plodding, ponderous type of game, with something of a Machinarium feel to it. Like Machinarium, there is no dialog other than pictograms. The puzzles involve basic point-n-click mechanics, the game hand-holding any inventory-management for you, with only a sprinkling of dangerous hazards.

Sadly, these puzzles are generally on the easier side, with little skill asked of you, the player. Many feel just like going through the motions, and the game’s glacial pace doesn’t help matters here. Knowing the solution to a puzzle, yet still having to walk back and forth at a snail’s pace, repeating the same action, can prove frustrating. Many of the puzzles involve you simply hitting the right thing with your projectile or just carrying out the default action when you’re focussed on the necessary object.

The mini-games bundled alongside this core action are a small consolation. The idea of the Pac-Man-esque popup game that rewards success with a puzzle hint is very welcome. A fishing mini-game demonstrates yet another way of tackling the much-loved, side-quest pastime, with genuine nuance and skill required. These asides can feel somewhat out of place, but they add some much-needed variety.

A game need not have a long runtime to be enjoyable, but be warned: this is a really short game. With only a handful of locations to speak of and only one significant run of puzzles near the end, you’ll be done with Papetura in just an hour or two. There’s no bonus content or hidden extras to reward repeat playthroughs, just the promise of reliving the experience.

Papetura is an impressive achievement that artists and budding game creators will undoubtedly recognise and appreciate. As a game, however, it falls short, despite some enjoyable moments.

Papetura has captivating visuals and an intriguing setting, but the lack of any real depth to the gameplay and an unfortunately short runtime leave a lot to be desired.