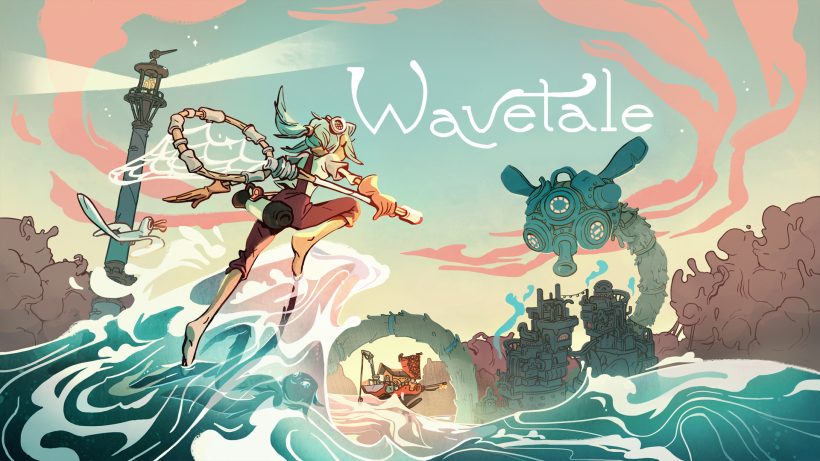 Anyone that knows me knows that I love a good story. A tale that will tug at my heartstrings and allow me to relate it to my own life, creating a deeper connection with it. I’m glad to say, Wavetale did precisely this.

Originally released last year as a Stadia timed exclusive, Wavetale finally joins us in the land of the living for all console players to play and enjoy. We are so glad it did because this beautiful game deserves to be known and played by as many people as possible. Why? You ask. Well, put your goggles on, and let’s go for a dive!

Set in the archipelago of Strandville – a beautiful cluster of islands submerged almost entirely underwater but still very much full of life, players take the role of Sigrid, a young girl who was raised by her grandmother following her mother’s death. Sigrid, along with her grandmother, oversees The Lighthouse, and providing they keep it going with “sparks”, keep the ever-growing fog at bay. Sigrid is a girl itching to leave the island to see what else is out there but is sadly trapped due to the aforementioned fog. Sooner rather than later, though, she gets her wish; just not under the best of circumstances.

As the gripping narrative takes hold, ancient processes begin to crumble, as whilst Sigrid is hard at work collecting sparks, the fog begins to cover the island completely – and it appears to have brought along a new entity – the Gloom. This dark sticky goo soon takes over the island, but luckily, Sigrid can defeat it and restore her home to its former glory – sort of. Soon thereafter, Sigrid finds herself pursuing a mission to save the neighbouring islands from this purple scourge, realising that it was not only their island that was in trouble. It’s not necessarily a unique story – certainly, it evokes Moana vibes – but it’s thrilling nonetheless.

On her newfound mission, Sigrid befriends a mysterious shadow below the surface of the water, which appears to allow her to walk, run and surf along the ocean’s surface, making travelling to the other islands super easy. Not only does the ability to do this mean you can skip out on the family boat trips for the foreseeable future, it also feels great. You will effortlessly glide across the water; quick, and easy, and it has you feeling like you’re skating on ice.

Of course, skating along the water isn’t the only way to travel in Wavetale. Sigrid also possesses a grappling hook, allowing her to jump and fly through the air at the press of a button, giving her a perfect way to traverse the land and sea. The game doesn’t offer any upgrades in the way of gameplay mechanics other than a select few to help with challenges later on, but they’re not really necessary by any means. That’s the beauty of this game; it’s so effortless.

The combat in Wavetale somewhat takes the back seat, and for the majority of the game, it feels irrelevant and can actually be avoided with a few exceptions. It feels like it’s been shoehorned in there for the sake of it, ultimately meaning it offers nothing to the player. Sigrid can use a combination of light and heavy attacks with her net to defeat the Gloom-made creatures that appear, but for the most part, I found it was quicker and easier to simply mash the light attack button. Enemies in the game don’t offer any challenge and are quickly dealt with, should you even choose to fight them.

Whilst many of the quests in Wavetale are ‘rinse and repeat’ tasks, it’s evident that the game’s primary focus is within its storytelling, and boy does it deliver. It touches upon many real-world subjects, such as climate change and how humanity ruins the Earth through greed and stupidity (a timeless theme if ever there was one). The game truly shines through the way it tells its story from Sigrids’ point of view as well as the relationship between her and her grandmother. As the story progresses, you will uncover more about your past and your family and grandmother’s decisions, for better or worse.

Another enjoyable aspect of Wavetale was the implementation of Sigrid’s Journal. This updates as you progress throughout the story and meet new characters, and it will provide you with a list of all your moves and abilities, a little more background to each character and the stories surrounding them, and an in-game map to use. The art in this journal is lovely to look at and was a little treat to enjoy in a world of Gloom.

On top of this, players can also purchase new hats, outfits, and even hair dye to alter Sigrid’s appearance. It’s not much, but it adds a little customisation to the mix, which is never a bad thing.

Wavetale isn’t an exciting game in any sense of the word. It isn’t going to wow you with its incredible combat system or range of enemies and scenery. But, what it will do is show you a story of love, family, and loss, and I think that in itself is worth giving it a chance. We can all relate to the themes in the game, and, indeed, for me, I feel it would strike a chord within even the most unfeeling person.

Overall, Wavetale is a beautiful example of what a good story can do to a game, regardless of its mechanics. It’s a simple premise, but a good one, however, it’s hard to justify the cost against what you receive.