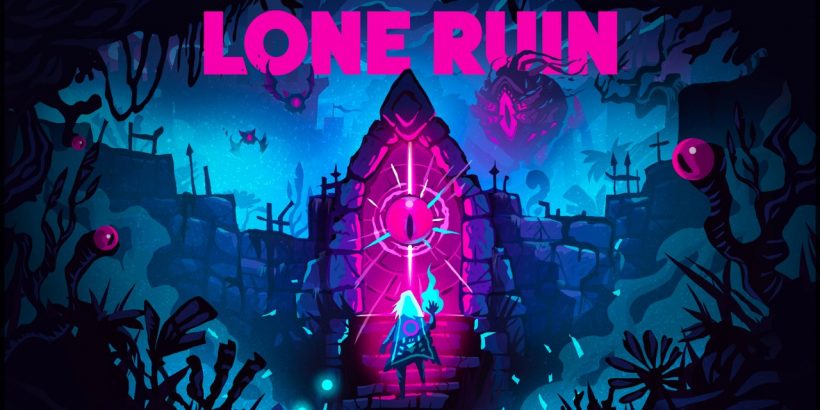 It’s quite funny when the phrase “Super Rare Originals” appears at the top of Lone Ruin because it is none of these things. That’s not an out-of-the-gate dismissal, just a warning that you should not anticipate any originality from this game, rather another take on the rather well-worn roguelike adventure, this time with a twin-stick shooter vibe.

You take control of a “spellcasting explorer”, initially choosing a single spell to bring with you on your quest – complete with a tired “it’s dangerous to go alone, take this!” reference. You then pick what may end up being your primary weapon for the entire session, and there’s a good number to choose from; Chain Lightning quickly became my favourite – a powerful zap of electricity that jumps from opponent to opponent – but I also got good value out of Shards – a chaingun-like barrage of razor-sharp magical needles. There’s much more than these (rail shots, laser beams, etc) but in classic genre fashion, a spell that may seem weak initially could become devastating with a few upgrades.

Protagonists of this sort of game are quite accustomed to being locked in rooms full of monsters, but Lone Ruin has the decency to at least tell you how many waves you’ll face – something that Enter the Gungeon could have done with, frankly. In fact, the whole experience is surprisingly, refreshingly forthright; in addition to knowing how many onslaughts of critters you’ll be facing, you also won’t enter a chamber without knowing what your reward for its successful completion is going to be. Yes, that’s kind of a Hades thing, as is your player character’s evasive dash move, but everything from Lone Ruin is from some other game all the way down to its visuals, which evoke the likes of Hyper Light Drifter.

The gameplay is smooth, with it all running at what feels like a locked 60 frames per second – desirable, because Lone Ruin is difficult (even on Normal), and you need that kind of fidelity for it to feel fair. That said, if you don’t choose your initial spell or upgrades carefully things can get a little dicey even in the early stages. You go into each area and shoot down monsters with your twin-stick arsenal, their corpses bursting into money and health. More excitingly you could get a new blessing, a second weapon, or otherwise a new ability to complement your main attack. Best of all though are the upgrades to existing blessings, which can really transform your run. The previously-mentioned Chain Lightning, for example, can inflict a “burning” effect, upgrade damage, cast more frequently – ultimately, kick more butt.

So far so good for Lone Ruin as it challenges you to descend through its many chambers. The problem is, enemy variety is pretty limited and the beasts themselves aren’t particularly inspiring. Most of them have a pretty singular attack pattern – pursue you and fire bullets. Others, such as the living monolith creatures you’ll love to hate, simply sit there and launch “bullet hell” patterns. You’ll also encounter mages that spawn smaller creatures, jumping spider-thingies that land with a shockwave attack, and… honestly not that much else. The monsters aren’t particularly animated either, often resembling still images that pulsate toward you. Still, this isn’t a dealbreaker because the game is challenging enough to be enjoyable despite its aesthetic issues. The boss battles are difficult and interesting, especially the one against three different nightmarish entities, each with a different means of attack.

While it performs very well, the graphics don’t quite work, with a lack of definition between solid ground and bottomless pits, at times. It’s quite easy to accidentally dash into what you thought was terrain only to lose valuable health as you plummet, or get hung up on the corner of a rock that you thought wasn’t anywhere near you, costing you a precious second or so. You do get accustomed to these things, though, so they’re not major problems.

Unfortunately, in keeping with its roguelike genre, there’s no kind of progression between attempts. You’ll post your score on leaderboards sorted by difficulty (Easy, Normal, Hard) and mode – and, unless I missed something absolutely fundamental, that seems to be it. Yes, that’s how roguelikes are, but crucially they’re also usually a lot more complex with many, many more variables. Lone Ruin is extremely simple to play, has about eight enemies, and a fairly anaemic complement of items and upgrades. An additional “Survival” mode boils things down to one room and a gradually filling XP bar that grants new perks, but that’s all there is to the package. Let’s put it this way – this is a roguelike that I beat on my third attempt. Maybe score-chasers will want to play again, but not so much the rest of us.

While the ingredients for a compelling roguelite are here, Lone Ruin opts for a straightforward roguelike experience that shines a spotlight on its relative lack of content. Shame, because it is fun and if they’d given me a reason to keep playing it, I would have.