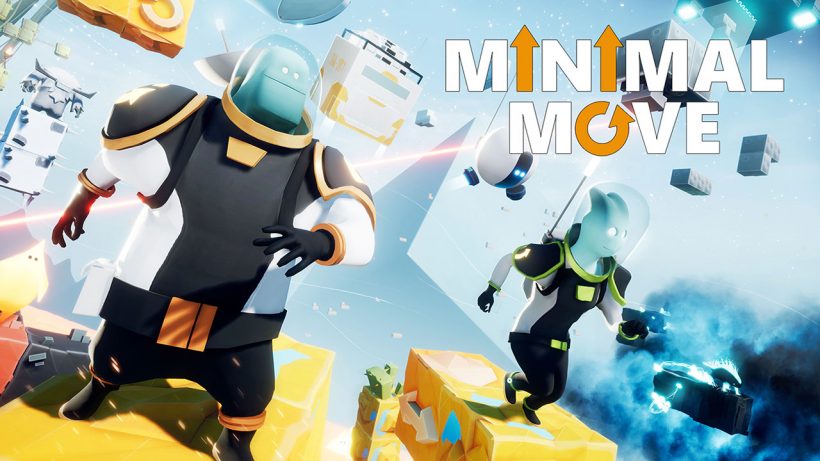 Minimal Move is a mind-bending puzzle game that’s engrossing from start to finish without making you feel bored or frustrated. Everything is balanced well enough for the game to be fun, though it feels unfinished upon reaching the end of your initial four-hour journey with it.

In Minimal Move, you play as Ido and Kaiten, two interplanetary explorers searching for the source of a mysterious signal, which leads them to a world made up of cubes and portals. The pair must traverse the cubes to reach the portals and progress deeper into the world. You can play the game solo, switching between each character, or in co-op with a friend working alongside you.

Cubes have their own gravity, and Ido and Kaiten can walk on any of their edges. However, you quickly learn that not every puzzle can be solved by walking around it. Instead, you must use each character’s power to move certain blocks. Kaiten can rotate sets of blocks, and Ido can push and pull sets up and down or left and right. These powers are introduced early on and make up the core of most puzzles, but the game evolves quickly to keep you on your toes.

Initial puzzles ease you into thinking about how to use Kaiten and Ido’s abilities to find unexpected solutions to puzzles. The game’s beautiful yet simple worlds are lovely, never distracting, but always feel like they’re hiding more out of sight. The game becomes more interesting when spikes block your path or you need to split the characters up so they exit through two portals instead of one.

In the game’s second world, fiery enemies are added that you need to extinguish. Heated blocks also come along to prevent you from walking on the blocks they touch, meaning your solutions now need to involve blocking or removing these obstacles. This is where the game can be at its most frustrating because it’s hard to suddenly hold all this information in your head when you haven’t had to previously.

When faced with these more challenging levels, the game’s flaws start to become more obvious. Kaiten and Ido control well for the most part, but the game’s control scheme is awkward. Your movement pushes the character in a direction relative to their placement on a cube. For example, if they’re standing on the left side and you push left, they won’t move. You need to push down or up to get them to where they need to be, and this can have catastrophic results with the more dangerous levels.

The controls also don’t help when trying to move blocks as one character while close to the other. You can’t crush the character you’re controlling, but you can crush their partner. Offering multiple control schemes may ease this issue.

Practice will soon make perfect, however, as every level has a grading system. Three stars are available, and each use of a character’s power drains your allotted uses before you lose a star. You can easily repeat each level from the menu, and it’s extremely tempting to keep trying until you get all three stars for each. Sadly, the game ends on a cliffhanger hinting at three more worlds in a sequel, but the upside is that you’ll easily finish Minimal Move in a day or so.

Minimal Move is a fantastic puzzler. Intriguing right until the very end, with a story and mechanics that keep you focused without drawing attention away from what matters, mind-bending puzzles.