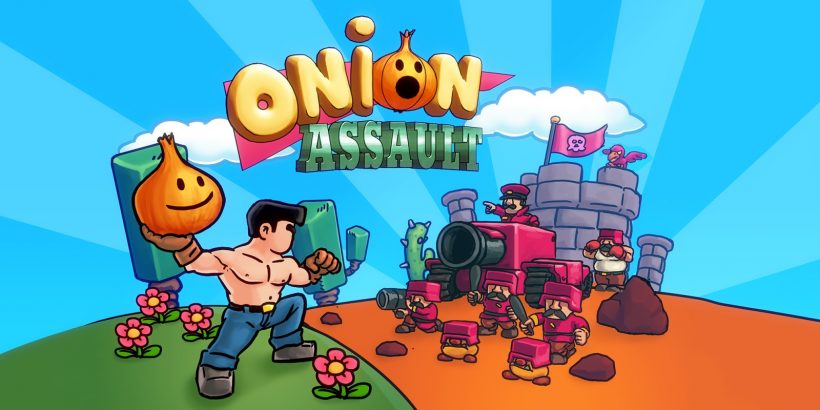 As a consequence of being a reskin of a different game (we all know about the Doki Doki Panic story at this point), Super Mario Bros. 2 plays completely differently from other 2D Mario games.

Due to that, many people saw SMB2 as a kind of black sheep in the franchise. It was the ‘weird’ platformer where you don’t kill enemies by jumping on top of them. Instead, the enemies can become platforms themselves. Nevertheless, it was loved by some people due to its weirdness and quirky gameplay. Clearly inspired by that game, Onion Assault is a bite-sized sidescrolling platformer with a familiar gameplay style, exquisite art direction, and a comical approach to story and world-building.

Here, you control a shirtless onion farmer (or his mom), as they try to defend their nation against the evil Croquetto Empire. That leads you on a journey across 16 different levels, where your platforming skills will be tested as you fight different members of the Empire, facing heavy machinery and a few gigantic bosses.

In terms of overall structure, Onion Assault feels much like an experience taken from the 8-bit era. You have access to a small map, divided into separated worlds. Each world has 4 different levels, where you progress (mostly) from left to right, collecting coins, and defeating enemies along the way. Your objective in each level is simply to get to the end, but, if you wish, you can also try to collect the three special coins that are often hidden in some hard-to-reach segments. Due to Onion Assault’s approach to enemies, though, levels have a different feel when compared to most platformer games.

Being able to jump and stay on top of enemies totally changes the feel you have with the game’s platforming progression. Instead of just focusing on platforming prowess, Onion Assault incorporates a few puzzle-like elements into the mix. Plants and enemies can be used as projectiles to activate levels from afar, you can use trampolines to bounce projectiles off in different directions, and there are even cannons you can use in certain levels. These are just a few examples of the sheer amount of creativity Onion Assault can offer. Unfortunately, though, that’s not present in every single aspect of the game.

While these unique puzzle-like elements are fun and interesting, Onion Assault leaves something to be desired when it comes to the platforming controls. Your protagonist is too floaty, and there’s a weird momentum that can ruin certain segments completely. That leads to some infuriating moments, where it feels like the game asks for a level of precision that the controls simply can’t deliver. When you add that to the game’s checkpoint and life systems, you end up repeating some levels over and over due to the problematic controls.

Onion Assault is also a short game that can be beaten in about two hours. Those who long for something that mimics the classic SMB2 gameplay may find a nostalgia-inducing experience within – one that doesn’t overstay its welcome. You just need to deal with the often frustrating controls in order to enjoy it.