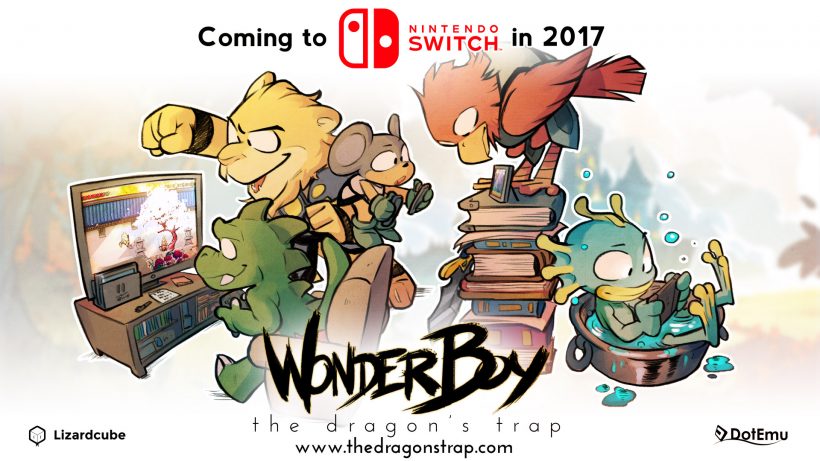 Lizardcube and DotEmu are bringing Wonder Boy: The Dragon’s Trap to the Nintendo Switch this year, and we’re here to introduce you to the idea.

Developer Lizardcube is working on a modern version of the cult classic Wonder Boy III: The Dragon’s Trap – the original released on the Sega Master System (Genesis), and this new version headed to the upcoming Nintendo Switch (among other platforms). It’s based on Westone Bit Entertainment’s original work, and is being made with the blessing of SEGA / LAT as well as series creator Ryuichi Nishizawa.

According to Lizardcube, the game plays “fantastic” on the Nintendo Switch, running at a “smooth 60 FPS.” They go on to call the screen and colour in handheld mode “amazing,” and note that it plays “just as well in full HD when docked.” Hell yes!

But… you might want to know about what the game’s about right? Well here’s the introduction text from the official website;

Cursed into a half-human, half-lizard monstrosity by the Meka-Dragon,
a lonesome adventurer is facing the challenge of a lifetime!
In search for a cure, our mutated anti-hero will explore the many traps of Monster Land…
and defeat many stuff-throwing, curse-wielding dragons.
How many more transformations can one hopeful body survive
as it turns into a Lizard, a Mouse, a Piranha, a Lion, and a Hawk…
The six different forms of our shape-shifting hero
make up the cast of this non-stop action-adventure platformer!

Get a look at the original July 2016 reveal trailer below and find yourself a better idea of what to expect from the finished product;

Wonder Boy: The Dragon’s Trap is headed to the Nintendo Switch sometime in 2017.

Has it caught you?