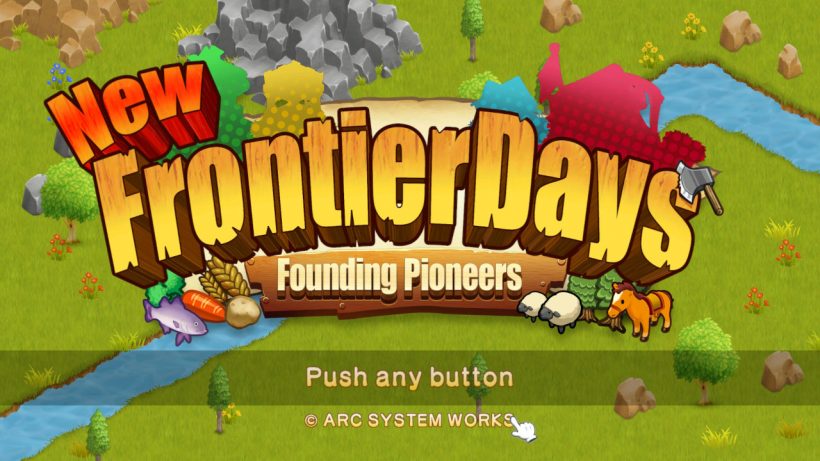 The town-building simulation genre that was so prominent back in the early PC gaming era – with titles such as Sim City and Populous – found a strange and somewhat successful place on the modern free-to-play mobile market. Many of those games however, are known for their shovelware quality – and for obliging the player to wait hours to actually be able to build anything. New Frontier Days: Founding Pioneers is the fast-paced counterpart of those games, but (sadly) it’s not free of all those quality issues.

New Frontier Days starts with a very simple premise. Your people have just moved to a new colony, and it is up to you to lead them into prosperity. Unfortunately, the game doesn’t do a good job of teaching you how to do that. When you first start the Story mode – which is the suggested option for beginners – you’re introduced to Jessica, a fellow pioneer and the guide for your town development. She then throws lots of info at you concerning how to farm resources, construct new buildings, and get new upgrades for your people… and then throws on top the more immediate need of some meat. 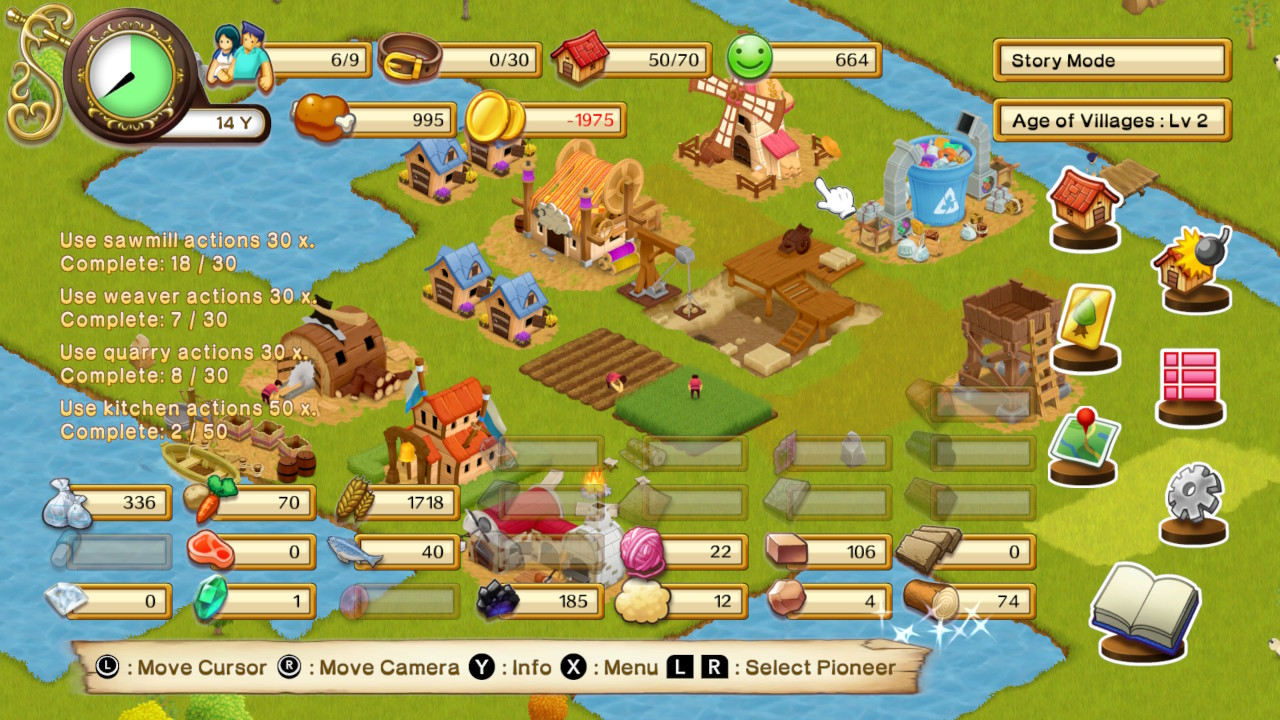 To achieve that, all you have is your settlement center, two villagers, and cursor-driven gameplay. With the right stick you move the camera, and with the right one you select all menus and stuff, such as your villagers, buildings and resources. Truth be told, it doesn’t seem like the perfect control scheme for a console game, but at least it gets better in handheld mode – where the game allows you to play using the touchscreen.

After you finally figure out the basic elements of the game, the gameplay loop is easily noticeable. You must select your villagers and tell them to go through the map gathering resources – taking down trees for wood, mining rocks for stone, getting wool from sheep, etc. Then, the raw material they gather can be used to build new stuff and expand your town. 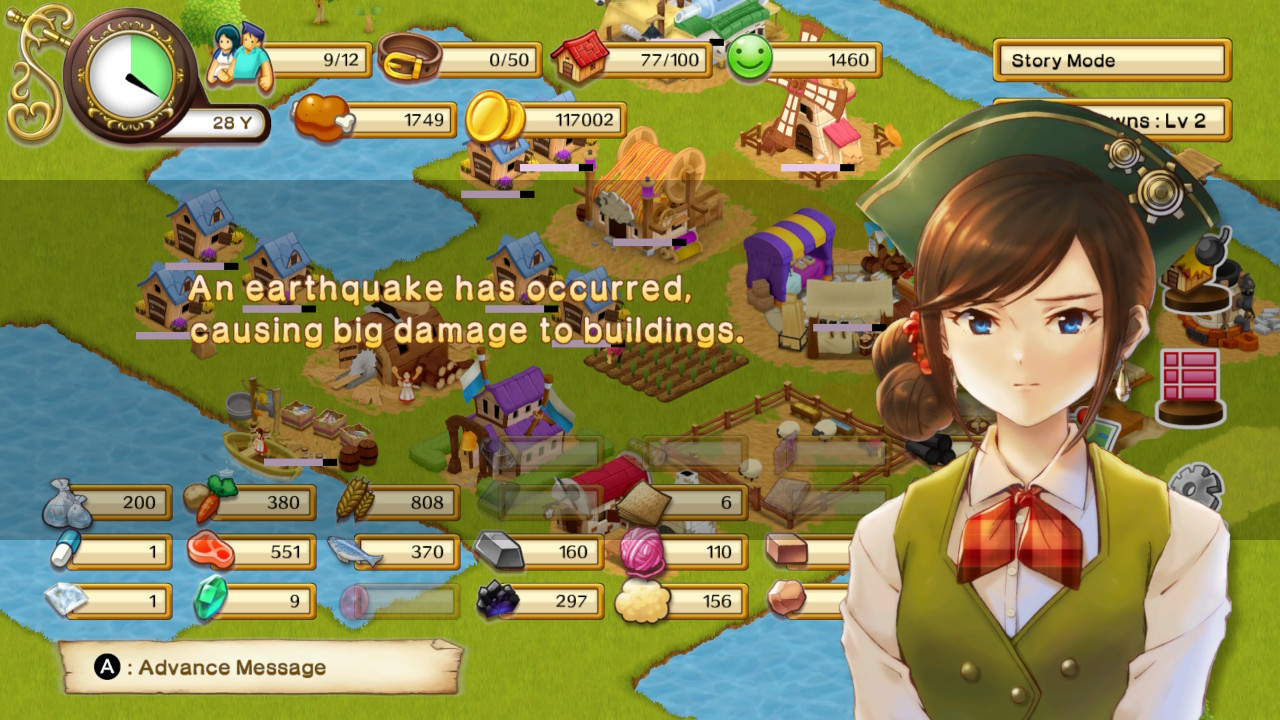 How much you’ll be able to expand your city is tailored by an enjoyable progression system – and here lies the entertaining and addictive side of New Frontier Days. While at the beginning the raw materials are good enough for any objective you may have, as your city grows you must process them into different things. You then turn logs into lumber, wool into yarn, stone into bricks, and so on; each on its specific building.

Doing those activities also unlocks for you what the game calls development cards. These cards are divided into two different categories; usable and passive. The first group can be used in any given moment to grant your town a positive or negative temporary effect. For instance, you can instantly get +50 wood, or increase the wool price in a moment’s notice. On the other hand, the second group are the permanent effect cards – and they usually change how the villagers work, allowing them to be more effective in their tasks. 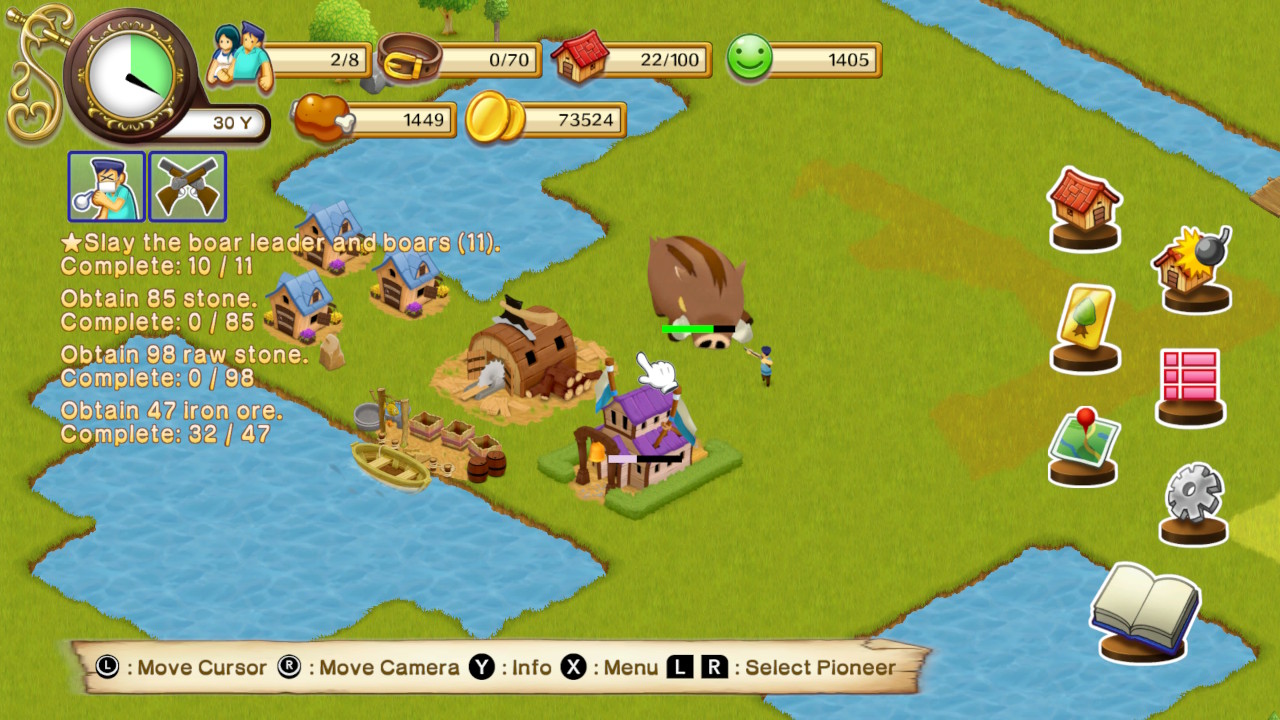 The sum of those systems are definitely better than its parts, because New Frontier Days manages to create a well-crafted simulator that keeps you looking forward to the next big thing you’ll need to build. To enjoy it though, you mustn’t judge this book for its cover – as its good aspects are very well hidden behind a graphic style that is just on top of that hard-to-define line between simplicity and mediocrity.

New Frontier Days: Founding Pioneers features a gameplay loop that’s quite entertaining, and it’s definitely one of those pleasurable, time-consuming style titles. I cannot suggest it if you’re not fond of the town-building simulation genre though, as it is not as nice to see as it is to play.