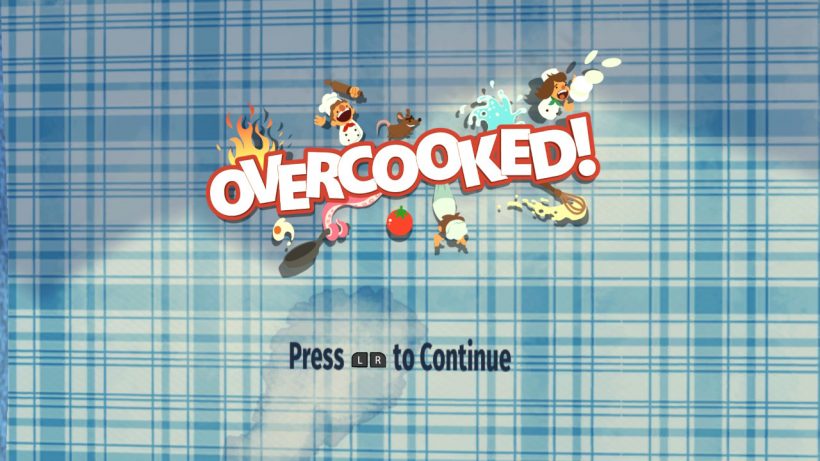 It’s quite well-done, but feels like working in Hell’s Kitchen!

If you’ve worked in any aspect of the catering industry, or indeed any sort of hospitality then you are immediately going to identify with what is needed to be successful in Overcooked: Special Edition: Teamwork.

This game can be played solo, but has been developed with a core – and arguably essential – team-based ethic in order for you to progress, let alone reach your full potential. Each level sees a succession of orders arrive on the top left of your screen, and it’s down to you and your fellow chef-types to fulfill these requests and satiate the appetite of the punters you cater for. You’ll not only need to prepare the items needed, you’ll have to cook them, prepare them, serve them, and then clean the dishes left behind – getting ready for the next dish.

Initially, it’s a rather simple affair – with onion soup the sole choice on the menu. Three of those chopped up and stuck in the pot ensures that a lovely broth of slop will be ready in no time. Having an assembly line will really make things easier, and playing with my better half and my kids we soon had things in order – no doubt helped by my managerial fast food background, and my bossy nature. One chopped, one cooked, one served, and the last one was the one in charge of ferrying all of the ingredients around. It worked a treat and we achieved maximum stars (three) on the level, as is the target for all. At this point it’s probably good to note that the points target for the stars varies depending on the number of players; the more of you there are, the more points you’ll need… 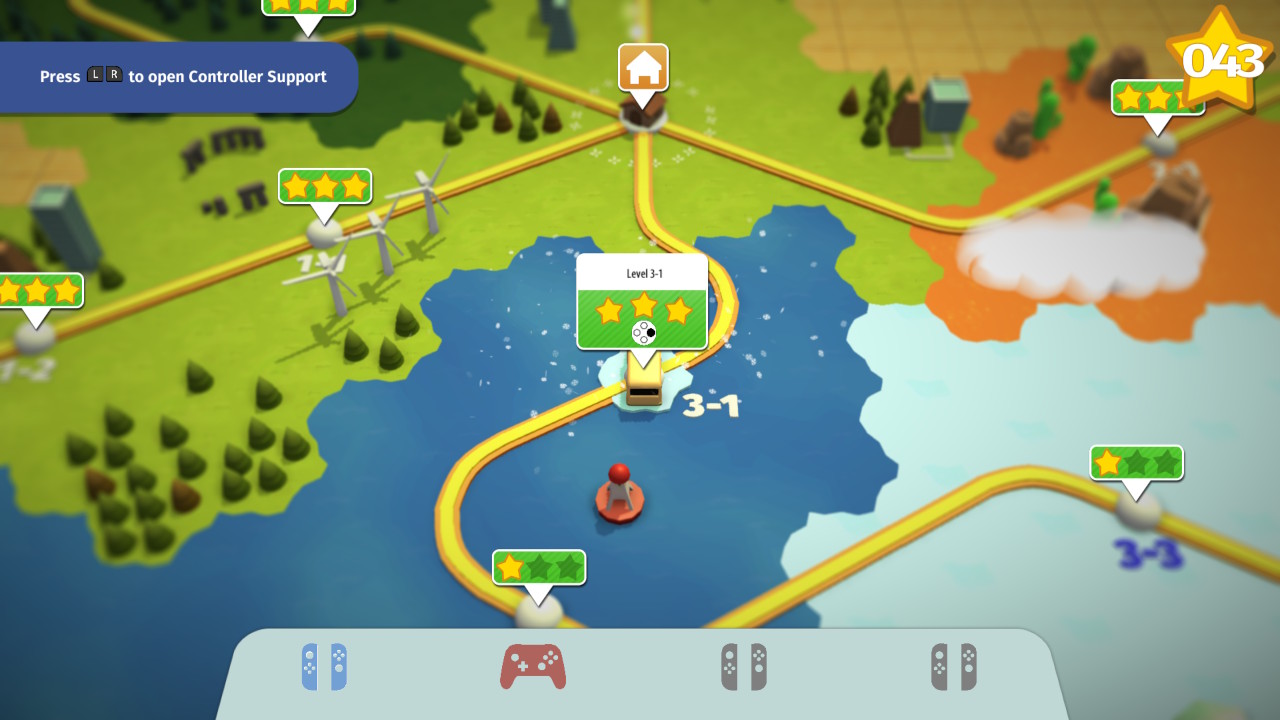 This will continue over the rest of the campaign and becomes increasingly more fiendish and more challenging, with different items on the menu becoming available, along with more hectic challenges in the kitchen. Gone are the open expanses – replaced with pedestrians, bottlenecks, galleons, and even moving vehicles coming into play. These things are there to really test your abilities (and resolve), to see how effective you can truly be. I haven’t even mentioned the mice, or the haunted (not to mention poorly lit) stages, or the futuristic space kitchens – with moving sections and pressure activated doors!

Oh, and take note of the fire extinguisher in each kitchen. It’s not there for decoration – leave your ingredients on a heat source for too long and watch your kitchen, not to mention your attempt on the level go up in smoke!

Overcooked: Special Edition sports a simplistic look that will be familiar to those that have played similar style games on mobile devices over the years, but it’s one that suits the game and genre perfectly. You can see what’s going on well enough, but it doesn’t boast the most fluid frame rate. I’m no Digital Foundry, but at times I noticed a few issues. It’s certainly playable, and nowhere near as bad as some quarters of the internet are suggesting, but you could say it’s a little under-cooked. Or half-baked, if you will. Ahem. One thing I would say is that as a colour-blind individual I did find it difficult to differentiate between the burger buns and the cooked beef patties – so if you’re reading Ghost Town Games, a tweak to that would be appreciated for folk like myself! The game plays consistently well across all three modes of Switch play, and although I was able to enjoy it on the smaller screen before bed, it does lend to a better experience on a bigger screen. It’s still perfectly playable in tabletop/handheld mode though. 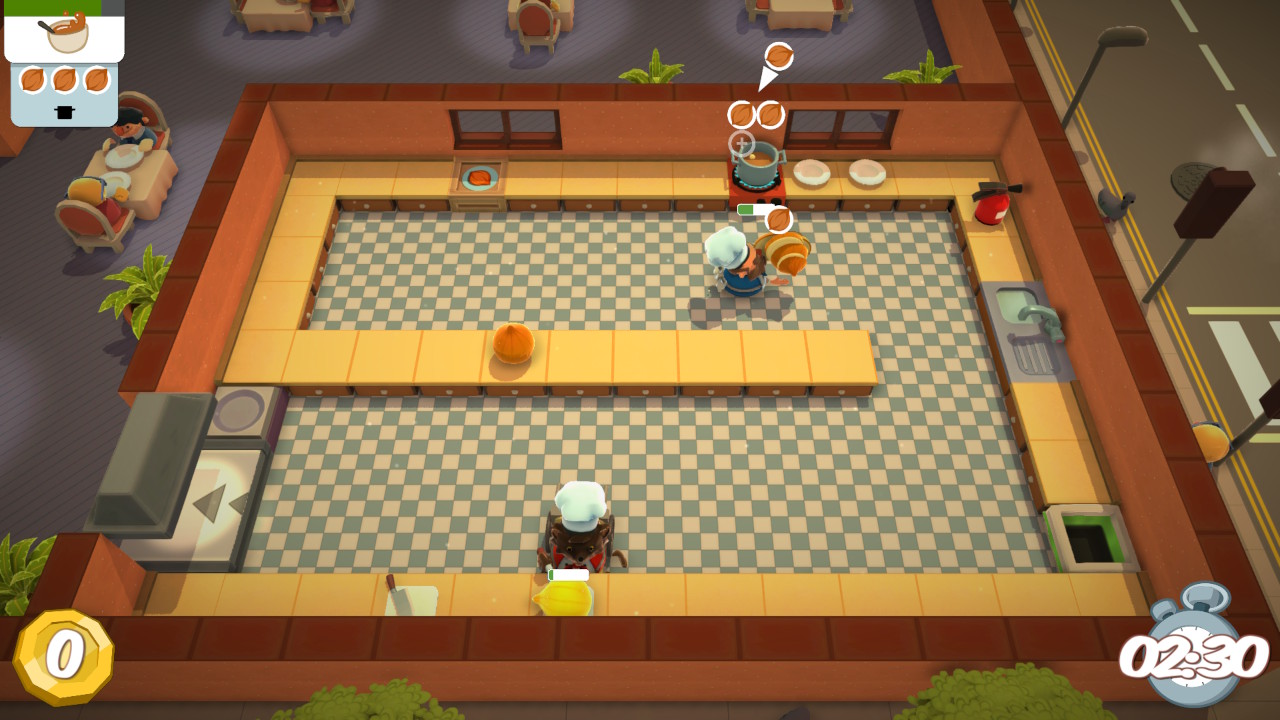 The controls are also simplistic, with the four main face buttons used to pick up (A), chop (X), dash (B) or shout (Y) – the latter of which seems to serve no real purpose. I did find that it could be difficult to pick things up easily, especially when things are really hectic. If you aren’t correctly lined up then you can easily make mistakes. The characters are controlled with the analogue stick on the Joy-Con or Pro Controller, when it may have been better suited to the D-Pad or directional buttons. As you’d hope for a local multiplayer orientated title on the Switch, the game can also be played with split Joy-Cons; players able to utilise one each, with the controls transferring to sideways play easily.

The music is very simple, yet effective. As well as blending in well with everything going on, it also adds to the tension. You immediately feel under pressure in the kitchen, and that is before the music speeds up as you start to run out of time. The aforementioned spooky levels were a particular highlight for me. If you get a chance to take it all in, you can hear everything around you; approximations of customer conversations, the hustle and bustle… it all adds to a fabulous atmosphere. 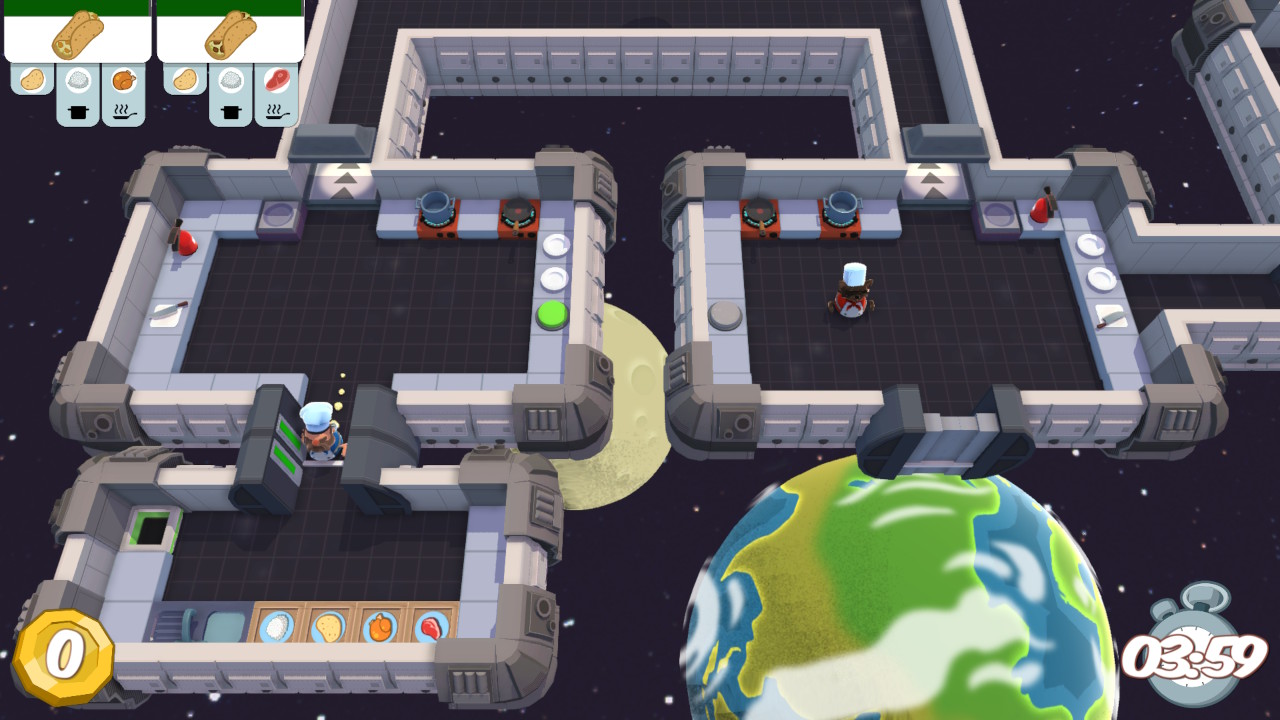 You’ll no doubt have noticed that the game is adorned with a “Special Edition” moniker, so you are no doubt wondering what’s so special about this version – right? It comes with all the of the DLC previously released for the game, which means that you get two extra DLC packs with The Lost Morsel and Festive Seasoning. In the end, you’ll have a total of 44 campaign levels with 22 different chef visages to choose from – spanning across a range of crazy kitchens. There are also 9 different versus levels to play on, specifically asking for 2-4 players.

Where the campaign requires tremendous teamwork and communication to work towards a common goal, Versus Mode switches this on its head by putting you into competition with each other. Sure, there’s still teamwork required, but by working against an opponent and the clock simultaneously that pressure is really ramped up. I’d spent most of my time with this review playing the campaign, and only got involved with this mode a little bit, but it’s arguably the best bit of the game. 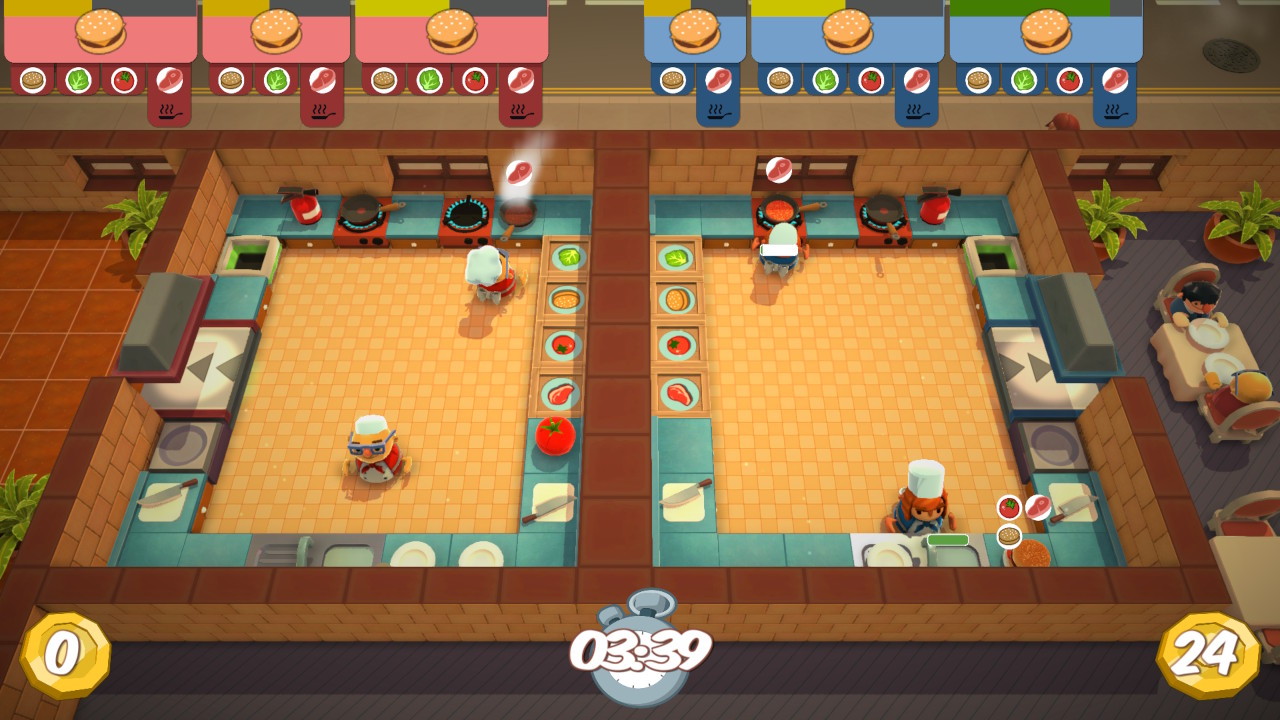 Aside from the minor issues with frame rates and controls, the game does sport some noticeable loading times. These can vary from thirty seconds, right up to a minute. In between levels you’ll occasionally encounter the Onion King as he explains more about your journey (there is a basic story about saving the Onion Kingdom from tragedy), and you’ll notice momentary freezing of the game when leaving his hut.

I suppose the biggest gripe with Overcooked: Special Edition is a similar one that befalls other couch-styled cooperative games; it’s only as much fun as the number of people you have to play with. It can be played solo, using the L and R bumpers to switch between two characters, but it’s not the same. Whilst still challenging, it’s simply nowhere near as enjoyable. I cannot stress enough how much fun I’ve had playing Overcooked with others, but I can’t help but feel disappointed that it’s offline only. For balance, I do have to say that it’s not just the Switch version affected; all systems lack online multiplayer. However, it’s not enough to detract from the overall experience for that do have others to play with locally.

If you enjoy a perverse challenge, then Overcooked: Special Edition might be for you. It’s an incredibly addictive, compulsive, and enjoyable title – and one that’s well worth that asking price. Boasting a large variety of kitchens, and filled with character, it’s another fine addition to the Switch’s party-focused repertoire and does well to show us exactly why it’s becoming the favourite multiplayer console of many (this writer included). If you have others to play with, buy this. You will not regret it.

There’s a tremendous amount of fun to be had with Overcooked: Special Edition, and it’s another great little party gem that’s guaranteed to generate some hilarity – if not arguments. It’s a joyous little game, and if you love fun it’s essential.