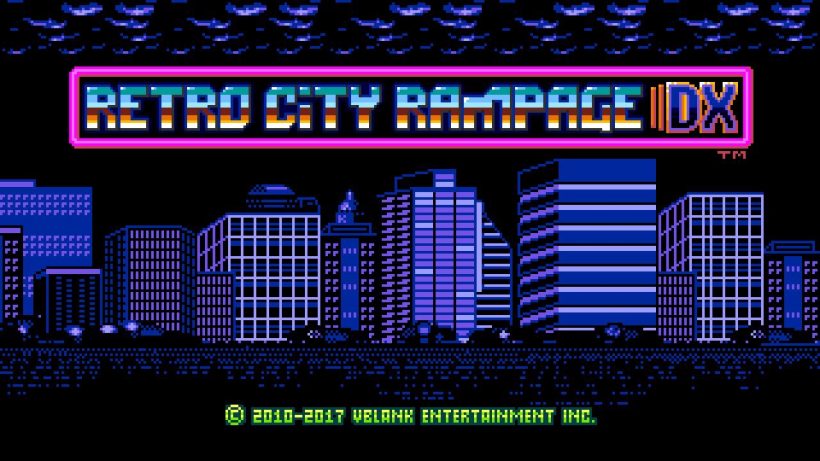 Set in 1985, you take control of a hero fittingly known as Player; following his life soon after he’s hired by the mysterious crime syndicate run by someone called the Jester. Three years pass, and after an elaborate (and gloriously parodied) bank heist goes wrong, Player escapes via a time travelling phone booth. Thrust forward into the year 20XX, Player meets an eccentric scientist – and our anti hero is entrusted with the job of gathering the various components needed to repair the time booth.

Working through just over 60 story missions and 40 arcade challenges, and taking you across the pixelated city of Theftropolis, the tongue never comes out of this game’s cheek for long; references from popular movies and video games littering the dialogue, decor, and characters. Speaking of characters, your main point of contact for the duration of your adventure will be instantly recognisable if you grew up in the eighties. In fact, most allies and adversaries will be satisfyingly familiar to many a nostalgic player. 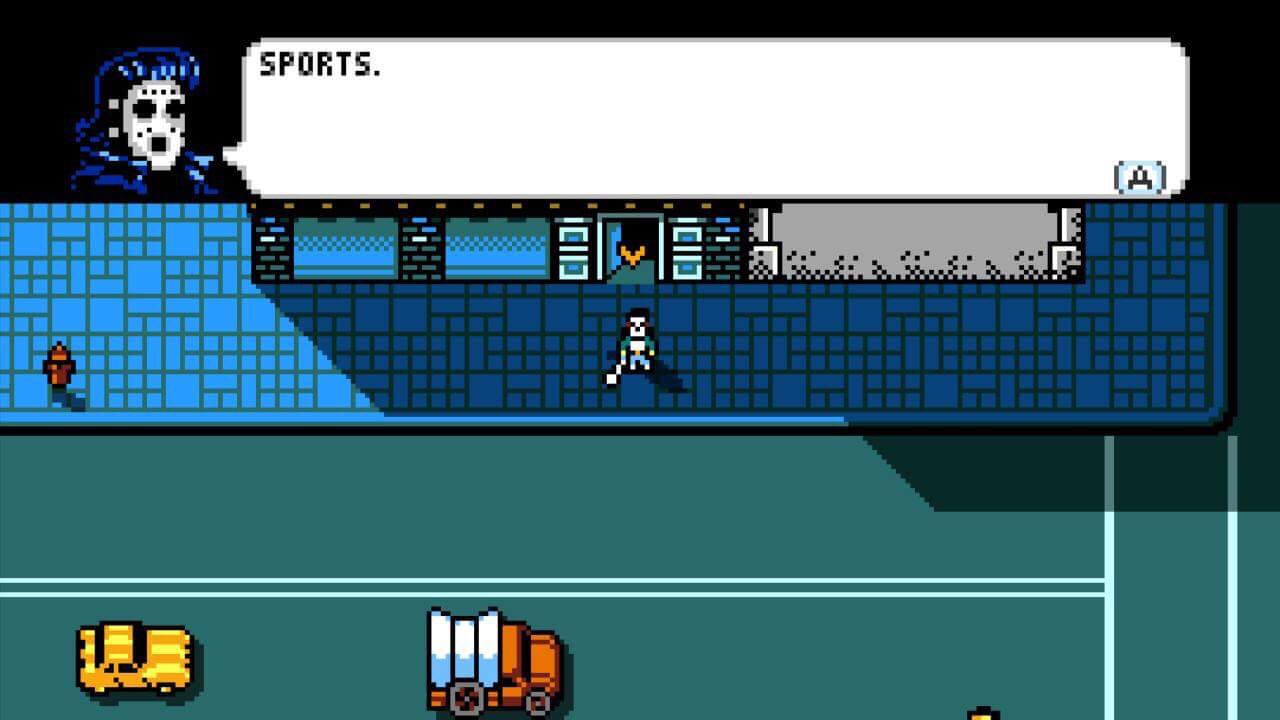 Even though the main story thread could be seen as one long drawn out retrieval mission, there are more than enough of the side quests and chaos-causing spree achievements (stringing together combos) to distract. That said, once the main story got into a certain rhythm, exploring the city was a welcome change of pace. It allowed for meeting new characters, finding more subtle references, and even helping out local businesses.

From the floppy disk loading screen to the common sense warning before the title screen, Retro City Rampage DX establishes and maintains its mantra; to entertain and not take itself too seriously with a brisk pace, witty dialogue, and even an NPC population that serves as a “what’s what” of retro fashion. Punks, yuppies, break dancers – they are all here, even spilling over into the more than 200 customisation options of Player himself. The first chance I got, I went into a hairdressers to rid myself of my slick back greaser styling, molding my Player to resemble a more Tom Sellick (circa Magnum P.I.) look. A few hours later, I yearned for a cowboy hat to complete my ensemble. 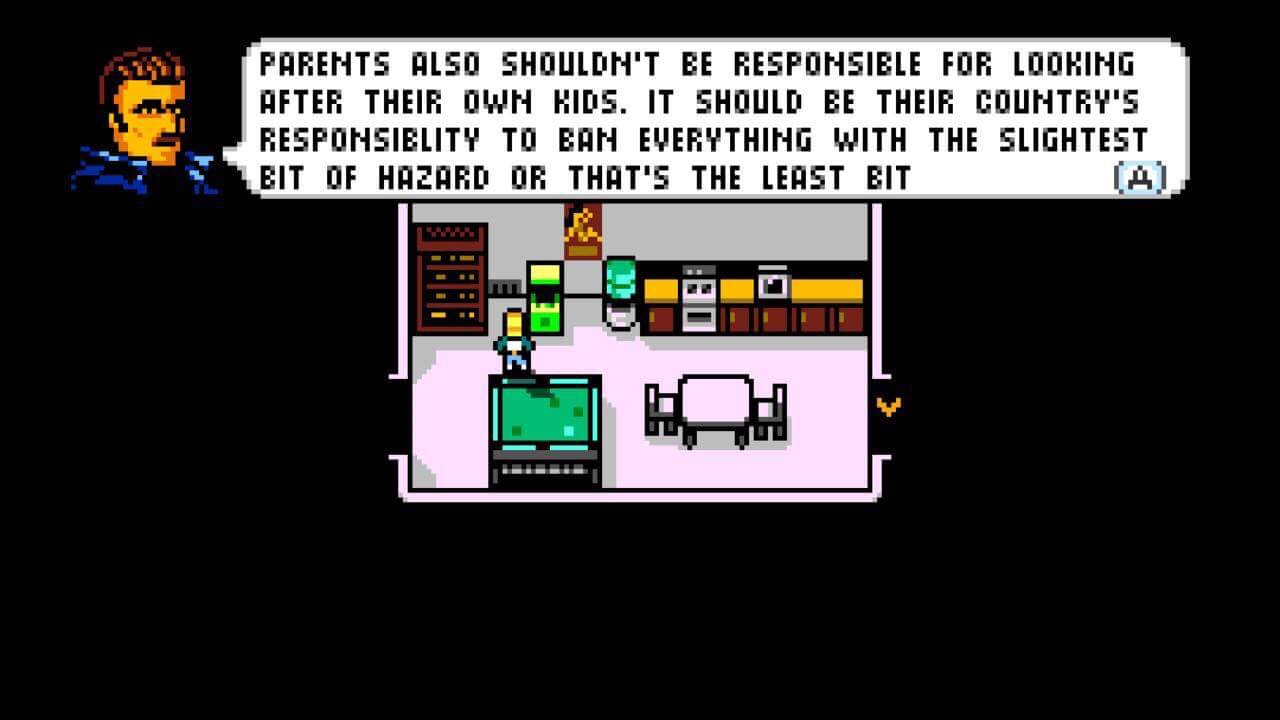 The vibrant colors of the world and over two and a half hours of satisfyingly eclectic chip tune soundtrack sound great. It didn’t matter whether it was wailing guitars and frantic drum beat reminiscent of the new wave of British heavy metal blasting from the TV, or something a bit slower paced accompanying your commute; it played very nice to the ear, and fit the game perfectly.

After a while, you realize that you will spend the majority your time in Theftropolis either walking, driving, or shooting. Certain actions have been made easier in this version, including stomping on enemies, swimming, and swinging from vines. Jumping and dodging enemy fire is also key strategy, and particularly useful during a hectic firefight. 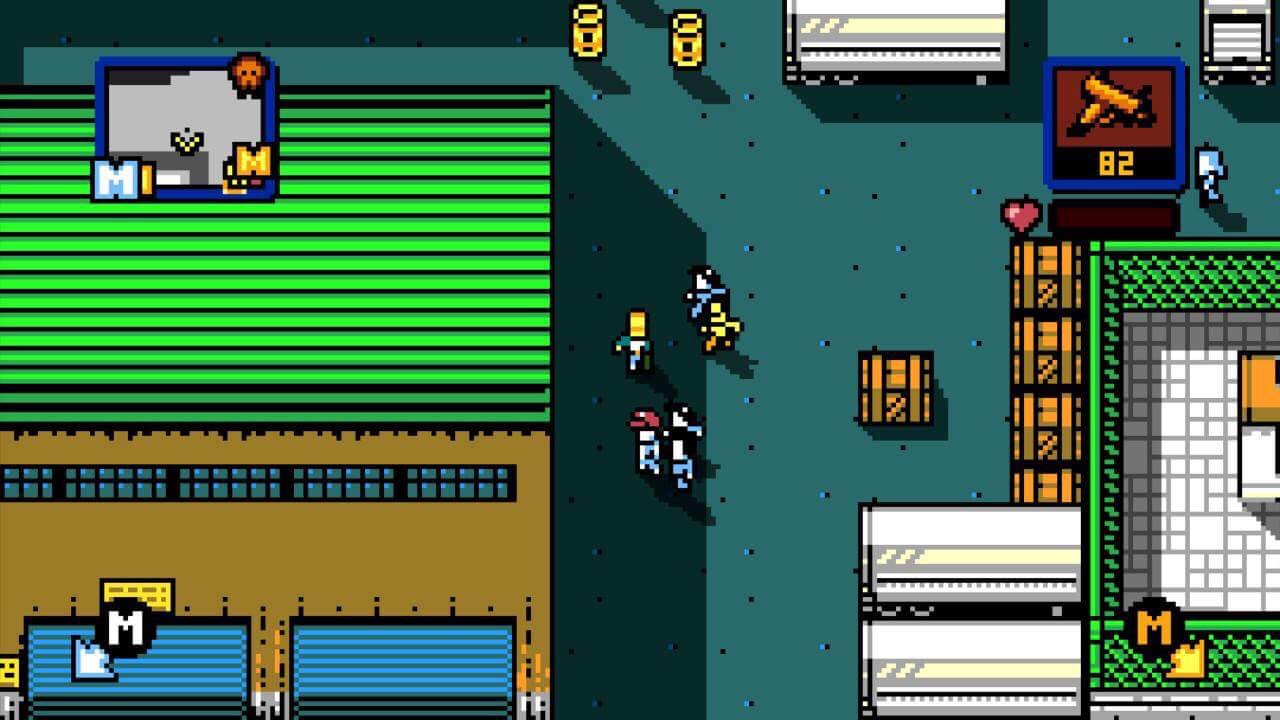 Shooting is handled either by holding down Y to lock on to an enemy (allowing for strafing), or using the right stick to shoot in all directions while moving. I found both schemes equally useful; using the lock on for individuals, and the stick for more open areas and waves of adversaries. Whatever your personal preference, it’s catered for pretty well here. All control types are supported here. Using the ZR button will allow you to scroll through your weapons, or a tap of ZL will bring up the touch (or just a grid for TV mode) interface. Among the 25 weapons on offer, the usual suspects of pistols, shot guns, and more exotic weapons like bazookas are present – along with a few little surprises.

While weapon selection is pretty intuitive whatever the situation, initially the same can’t be said for the driving. Again, there are two options available; manual and automatic. Manual gives the player tank controls. Curiously, B is accelerate, A is for braking, and you use left and right to steer. Automatic is more straightforward as it’s just a case of pushing the stick in the direction desired – but don’t forget about the brake, as pushing fully or constantly moving the vehicle leads to an erratic and choppy experience. It takes a bit of getting used to, and the three levels of zoom the game offers may help as well. Spending time driving will probably require a wider field of view, whereas walking or biking is more suited to the bigger sprites and more focused viewpoint.

There’s a slew of popular culture and retro video game nods here, and if you’ve never played the game before it would simply be a shame to spoil them. Suffice to say, from the opening sequence replicating an iconic super hero movie, right up to seeing two vehicular icons of the 80’s tailgating each other, there’s a child like joy in recognizing every little character reference, game trope, or sly joke. Sometimes the humor can be a little on the nose, and a few lines of dialogue made me roll my eyes, but I always found myself hunting for the next nugget of nostalgia. 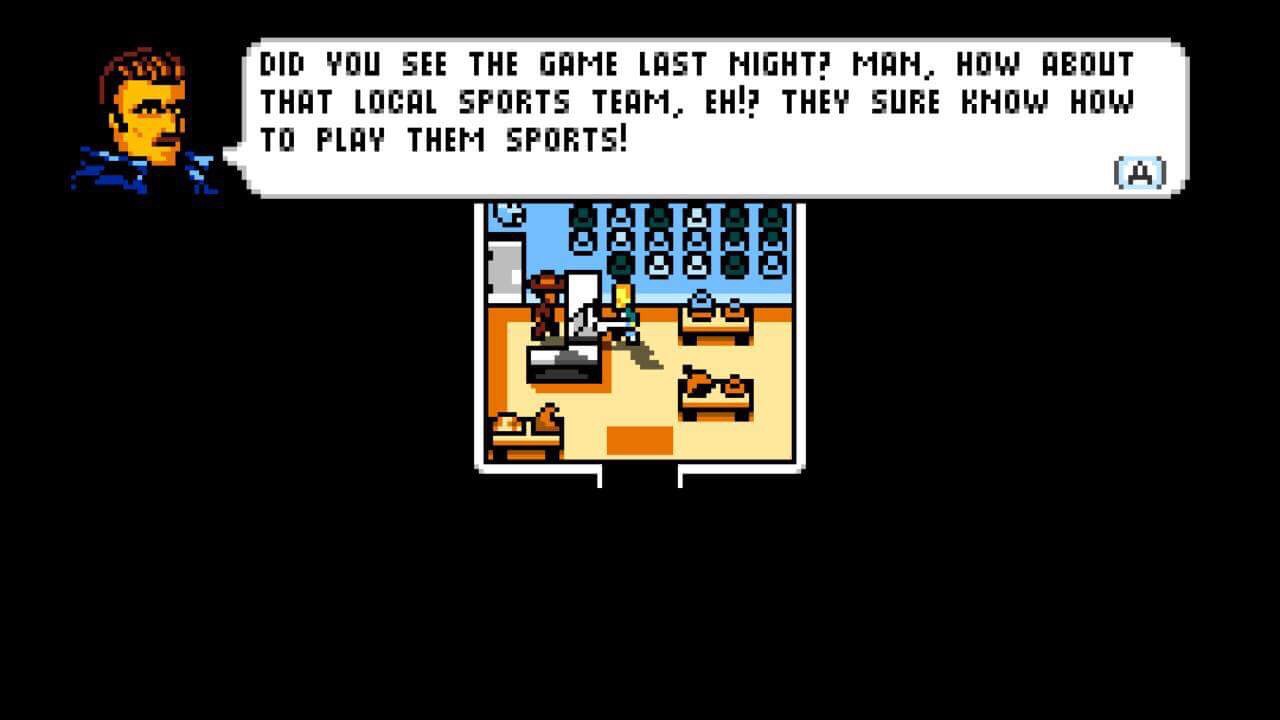 Whether it’s having a little too much caffeine and zipping around at supersonic (pun intended) speed, or something more akin to a certain Super Nintendo classic, the action – more often than not – is frantic and thoroughly entertaining. Plowing though a barrage of armed guards into an enemy strong hold on a shopping cart, only to escape in triumph on an enraged mechanical ape has never felt so absurdly glorious. There’s enough variety in the missions to be engaged for long periods. There are 2D side scrolling, driving (and a sub-set of race challenges), stealth, and even boss missions. Although some of these set pieces range from the mildly frustrating to the downright obtuse, the “stage complete” notification sometimes appeared regardless of whether I actually felt fully in control. There were a couple of driving missions in particular which I failed over and over again, only to be successful without changing my approach.

Exploring the many different local business establishments will uncover vending machines, upgrades, side missions, and even some great mini games which use material from fellow indie developers and a YouTube channel (providing yet another distraction from the main story mode). Even the game’s settings serve as an opportunity to give your overall experience the retro look, either through a monochrome, green tinged, or saturated filter – or maybe even via an old school TV border. 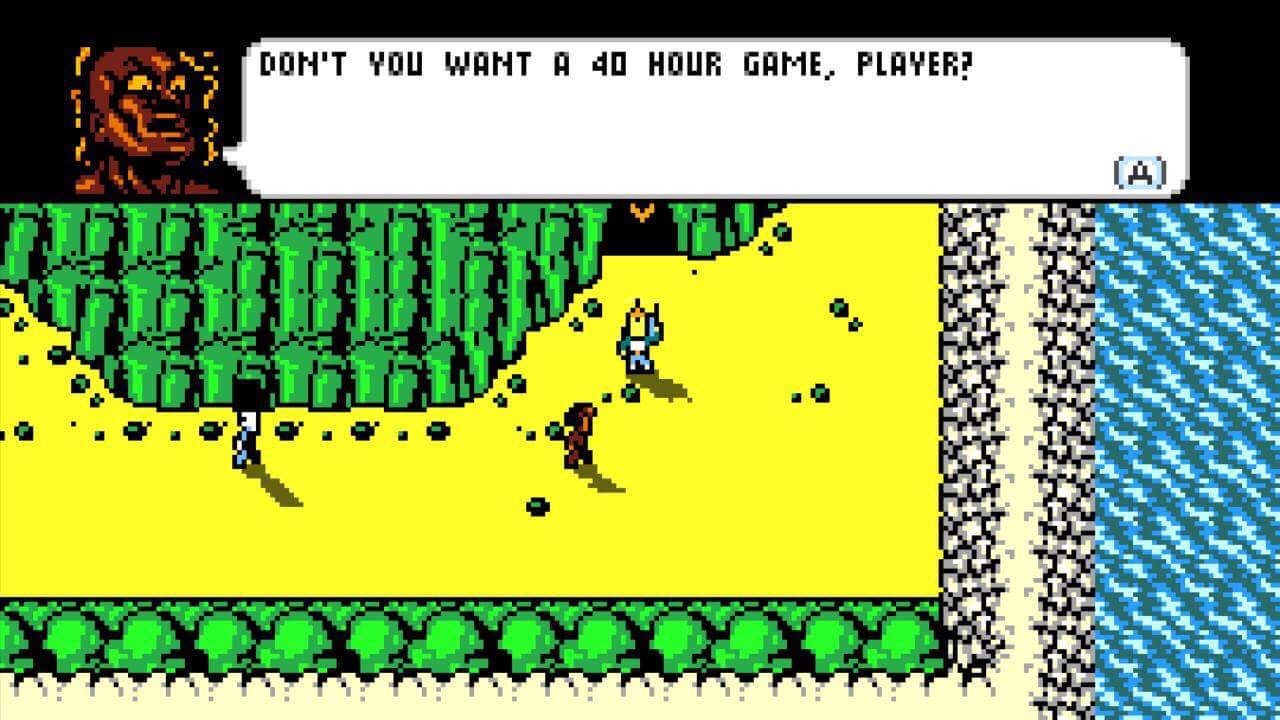 Retro City Rampage DX on Nintendo Switch is a charming and consistently satisfying sandbox adventure game that especially caters to pixel art fans, nostalgic pop culture aficionados, and those keen to explore – as well as those who simply want to cause a little chaos every now and again. Full to the brim with personality, humour, and variety, the inevitable comparisons to the Grand Theft Auto series – while understandable – shouldn’t detract from Retro City Rampage DX being a welcome addition to anyone’s Nintendo Switch library. The nods, references, and parodies will keep any eagle eyed player engaged, while the frantic set pieces and wealth of options are both thoroughly entertaining and deep enough to invest a lot more time in (once the main story missions are finished).

That said, the ultimate question for some of you will be whether Retro City Rampage DX warrants a second purchase on Switch if you’ve previously owned the game – and I’d say emphatically yes. If you’ve only played on Steam or a home console you’ll soon see that the portability really takes advantage of the mission structure of the game. Conversely, if you want to kick back and explore, that’s cool too. The Switch’s glorious 6.2 inch screen and full range of touch and button inputs put it ahead of any portable incarnation – particularly if you want to use the touch screen to select weapons. The initially gimmicky “drop in, drop out” nature of Nintendo’s hybrid system is beautifully demonstrated here, carrying straight on from where you left off – whether you were in the middle of a mission, or just wandering the streets. It’s the perfect way to get your rampage on, and it’s more than worth another go.

Whether new to the game or returning, I can only advise that you buy Retro City Rampage DX for the Nintendo Switch. It’s one of those games you’ll thank yourself over and over for picking up.

Even if you don’t have a penchant for pixel art or consider yourself a popular culture vulture, there’s plenty to enjoy in Retro City Rampage DX. Take the 5-6 hour main story stages at your own pace while exploring all the little nooks and crannys of Theftropolis and you’ll find a wealth of customization, add-ons, minigames and a variety of vehicles and weapons to try out.

A thoroughly enjoyable and satisfying retro themed sandbox which will appeal to both fans of the 8 bit era and open world adventure games.