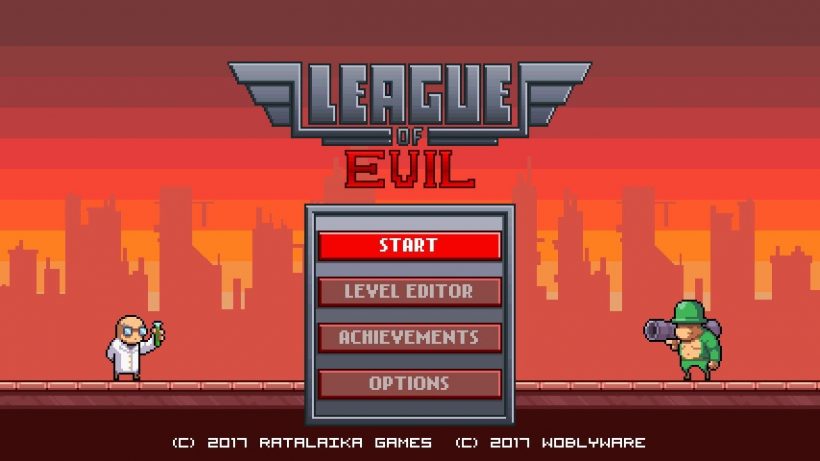 The Switch is doing well for great little indie platformers at the moment, and this week it looks that the eShop has managed to get another one for the catalogue.

League of Evil has you take on the role of a cyborg-like character as he undertakes a mission to take down the titular quartet. Each level has you negotiating a number of death traps in all four directions as you aim to reach one of many evil scientists, before punching his head, as Dirty Harry would say, ‘clean off’. It’s certainly a gory way to end a level, but you can turn the blood off in the settings for when any younger players might want to have a go.

The gameplay mechanics work very similarly to what we’ve already seen on Switch in Slime-san, and will soon see again when Super Meat Boy lands on the console. In fact, it’s probably a cross between the two – it was the emphasis on the same frantic cling-to-walls dashing that Slime-san uses, and shocks and awes with gore at the same time. 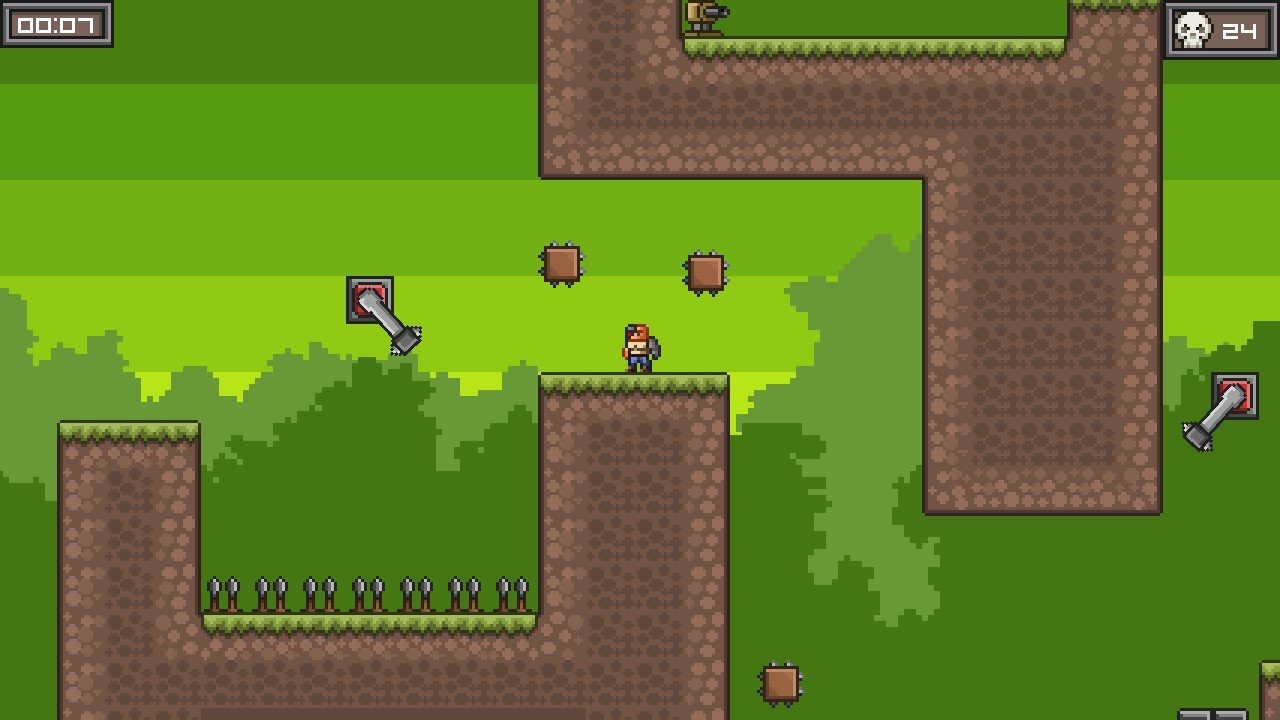 It’s a game you’ll want to race through, but in a good way. As with Slime-san, the time spent on telling the story before you get into the meat of the action is short and sweet. Basically, a group of deranged scientists form the titular League of Evil, and across the game’s four sections you’ll need to reach them beyond the death traps to be able to clobber them all.

The challenge level is infuriating, but better for it. Sure, if you practice over and over and over again, and memorise where the most dangerous parts of each level are, you’ll have a decent chance of making it to the end in one piece more often than not. But your average player will see this as an impressively challenging platformer which involves thinking at least two steps ahead of the move you’re making. On plenty of occasions you’ll have to take jumps of faith down to obstacles you won’t be able to see, and the fury that will build up (aided by a death-count clock to the top-right of the display) is only going to make things harder. 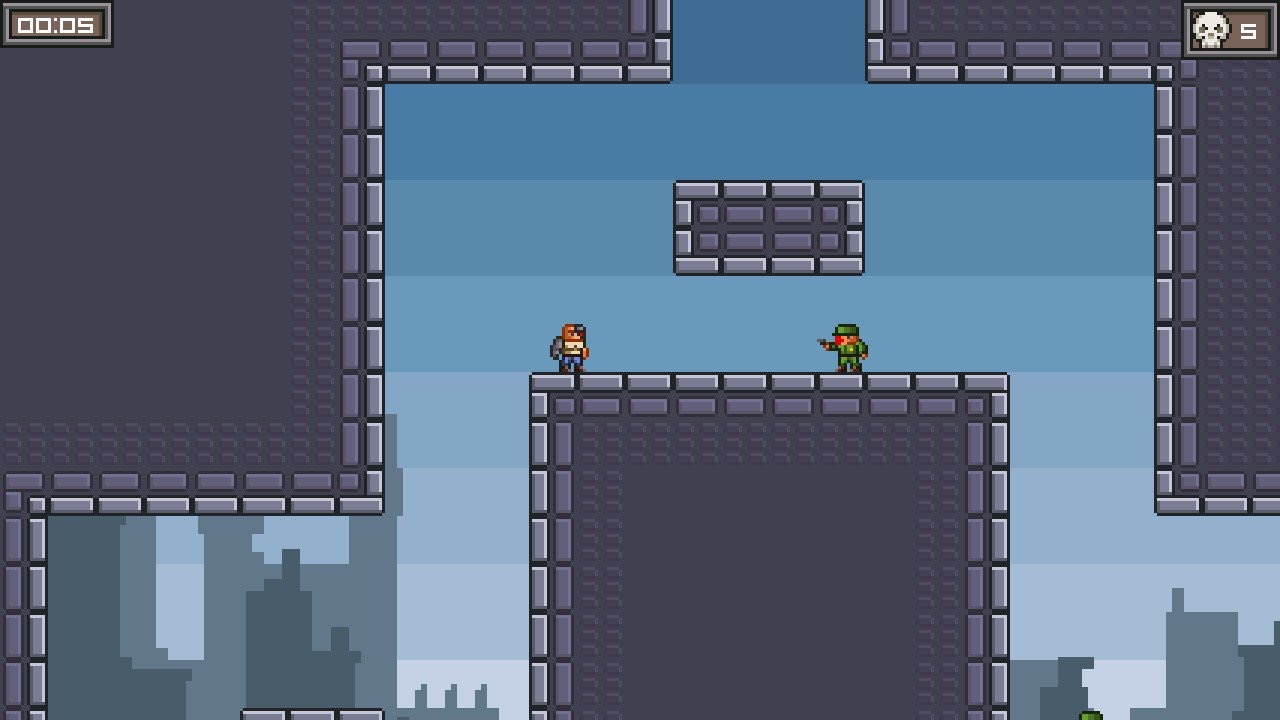 Each level features a briefcase which is en-route to the end-goal in the easier levels and completely off-track in later, more difficult challenges. Choosing to go after these is completely up to you – they make no difference when it comes to the star rank with which you finish the level, but there’s a completionist reward of satisfaction if you manage to get them. A ton of players will end up deciding that the inch-perfect timings and landings needed to nab some of the briefcases may not be worth it, and instead darting to the finish in as quick as possible will prove to be the safer option.

But, the likelihood is that if you do go after those briefcases, you’ll keep trying over and over again until you get them. The biggest challenge comes not in terms of the platforms, but in the moving enemies, particularly those which fire projectiles. Some will fire in bursts of more than one bullet, so you’re guaranteed to be caught out after falling for the trend of the past twenty or so levels. But it’s a nice indicator that the game is getting harder as each level progresses. 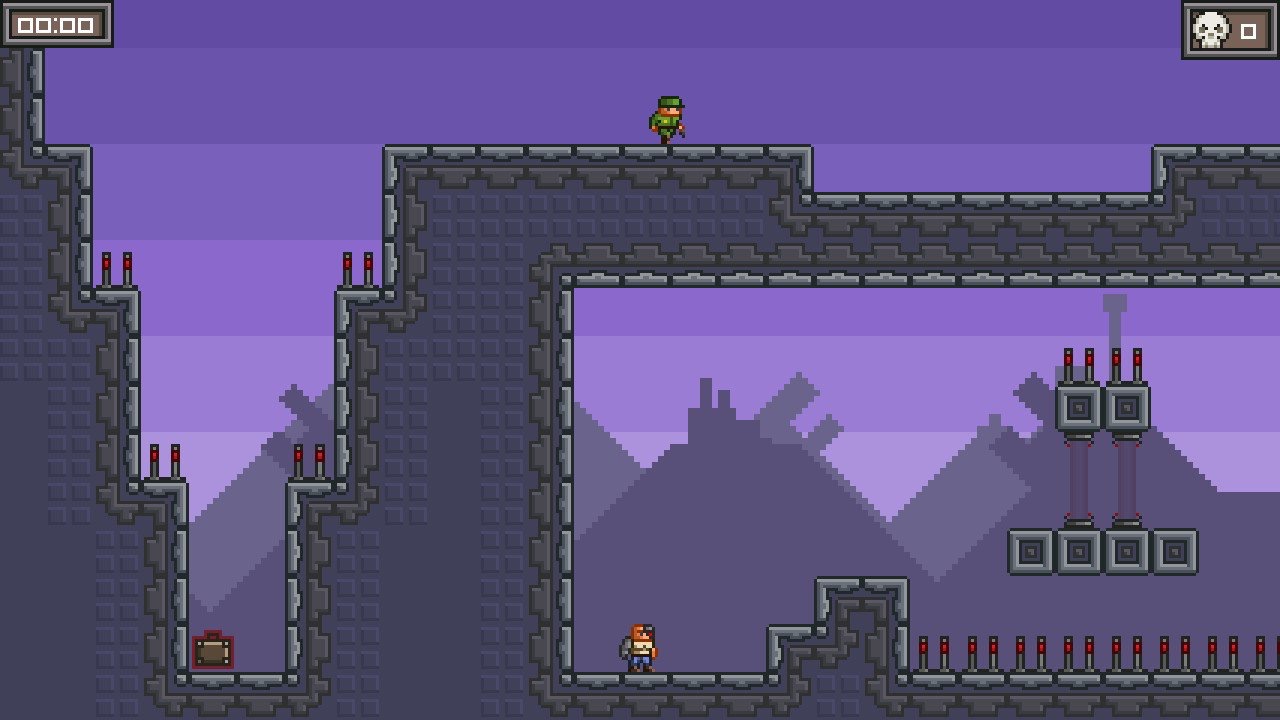 The fact that there’s no load times and the levels are really short (they can all be done in around 30-45 seconds if you really put your mind to it) really helps here. You’ll find yourself clocking up deaths by the double-figures but not getting bored of it.

It’s tough to find any kind of fault with the game’s visuals – yes, of course it’s come from a past on mobile devices, but as is the case with most games working the 8-bit style, visually it looks beautiful. The picture is super-crisp, and performance shows no sign of trouble whether you’re in handheld or docked. The soundtrack is as you’d come to expect with the 8-bit styling – a short loop played over and over again, with only a minor between the levels, worlds and menus. It’s not a particular gripe until you start failing repeatedly and hearing it start over, but of course you can always mute it if you so prefer, because it doesn’t make any impact on the gameplay at all. 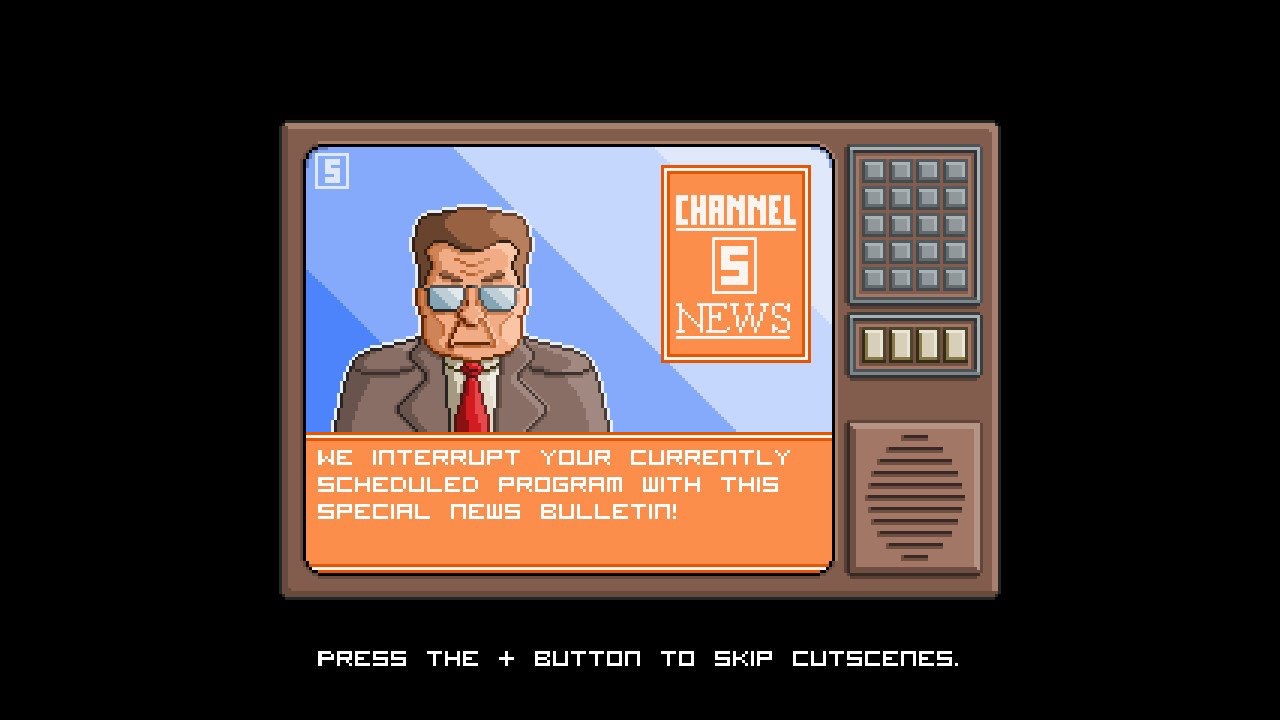 There’s a lovely (if a bit small) achievements section on the main menu which gives the game that little bit extra longevity. From the simple – completing 25, then 50, then 100 missions – to the much more difficult, including the Starlord achievement, which demands you get three stars in all of the game’s missions, there’s plenty to keep you coming back. And you’ll be there for some time trying to get that last one – you’ve done very well if you manage to get just two stars on any of the levels.

If you’re a total sadist (and let’s face it, you probably are if you’re willing to dedicate yourself to the challenge of some of the game’s later levels), there’s a level editor mode which, as it says on the tin, allows you to design and share your own creations, creating your own abyss for others to make their way through, before, as with every level, punching the head off the evil scientist. There’s a bit of online facility fun to be had here – you can browse the latest uploaded levels, search directly for those made by your friends or downloading packs of 30 missions you can download and store.

League of Evil certainly comes recommended if you’re looking for a challenging, inch-perfect platformer which separates the men from the boys. It’s a perfect little brain-simulator which suits the Switch’s mobile tendencies, and is great for attempting a few levels in short bursts in situations where you have five minutes to kill.

It’s pretty hard to find fault with League of Evil. Ratalaika Games have really demonstrated just how well a port of a mobile title can make use of the Switch. Noting that it’s beautiful in handheld and on the silver screen, and factoring in the challenge and ability to keep players interested and focused on getting through the short burst levels, League of Evil won’t be a game that you’ll regret adding to your Switch collection.