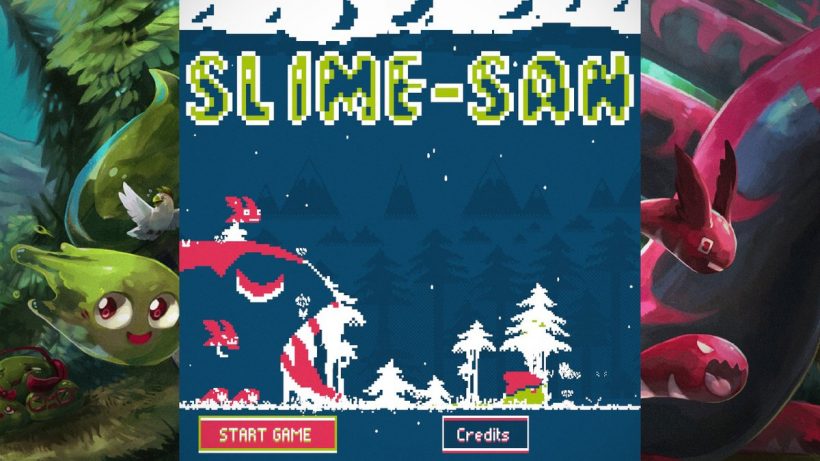 You know in The Legend of Zelda: Ocarina of Time, where everybody loved going inside Jabu-Jabu’s belly? Well imagine a pseudo-NES-style game entirely set inside a ghastly worm. That’s what we’ve got here in Slime-san.

There’s a short bit of backstory about how Slime-san managed to get himself inside a worm – well, nothing more than “Slime-san was minding his own business, sliming around in a peaceful forest when suddenly…A giant worm appeared and gobbled him up!” Quickly into it, then – but it’s a pace players had better get used to keeping.

The aim of the game is simple; guide Slime-san – a protagonist who is literally a blob of slime – towards the end goal. You’ll want to do so in as timely a manner as possible while dodging and jumping around a series of obstacles, as they can have you escorted back to the level’s beginning faster than you can see them coming.

The gameplay is incredibly tricky and takes an age to get to grips with, but it provides an immense level of satisfaction when things start to click and you start to feel like you’re finally actually in control of your slime. To describe it at its most basic, the composition of the main series of levels in the game involves a new way of moving the environment to make life difficult for the player, and each takes a fair bit of getting used to. 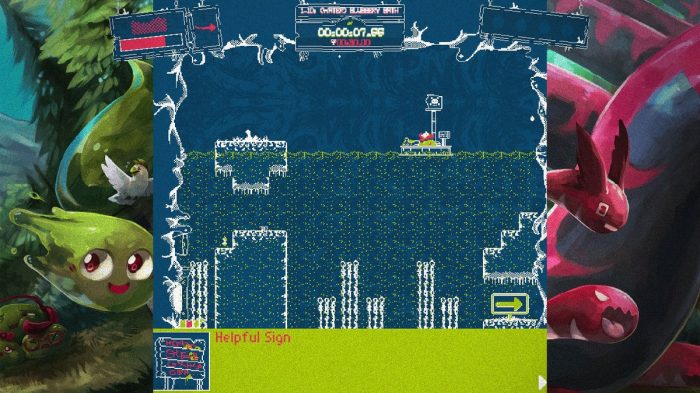 There are over a hundred levels in the game, so finishing the game too quickly certainly isn’t a problem here. Each takes on a fairly unique slant too, which is nice to see. Bearing in mind that the controls are rather minimalistic, the developers have found a lot of things to do with just a small number of button combinations in order to pull them off.

Holding either of the two left triggers will slow down time, allowing Slime-san to blend in with and pass through anything that is the same green colour. This blending can be with enemies, walls, or other moving objects, and slowing time makes a great amount of difference in levels with plenty of moving objects to dodge.

This pass-through ability doesn’t apply to anything that’s red in colour, however – one touch of them, and splat; you’re back to the start. Meanwhile, there’s of course A as the jump button, but the right triggers make things more complex as they allow you to dash in one of four directions. This helps you to scale normally non-traversable gaps, but you relinquish your sense of safety and control while doing so. It’s a lot to take in, and a lot to master. 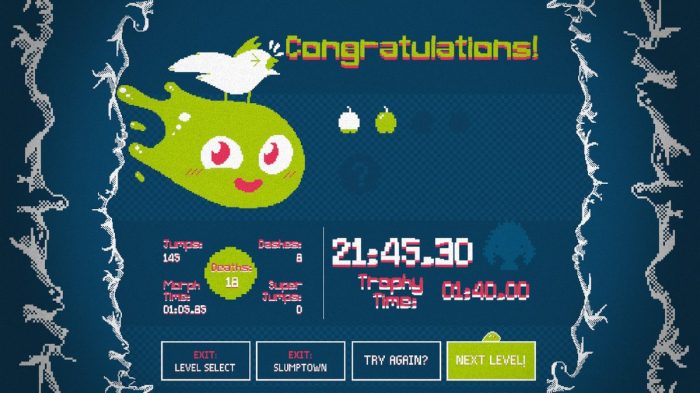 By the way, there’s also a harsh time limit on each level. You simply cannot stand about pondering your next move – you have to get going before a sea of red stomach acid covers the room.

Getting as good of a time as you can on each of the levels is the name of the game, and any small slip-up – including touching an enemy, touching a red wall, falling below the level, or moving too far wide of it – will result in you returning to the spawn point. This can get pretty irksome at times, but not enough that you can’t appreciate that the game’s beauty comes in its challenge.

The challenge level ramps up when you figure out that in each unique part of any one level (they’re usually divided into four clear sections with respawn checkpoints in-between) there is a collectible to pick up, hanging out in some ridiculously awkward place to reach. 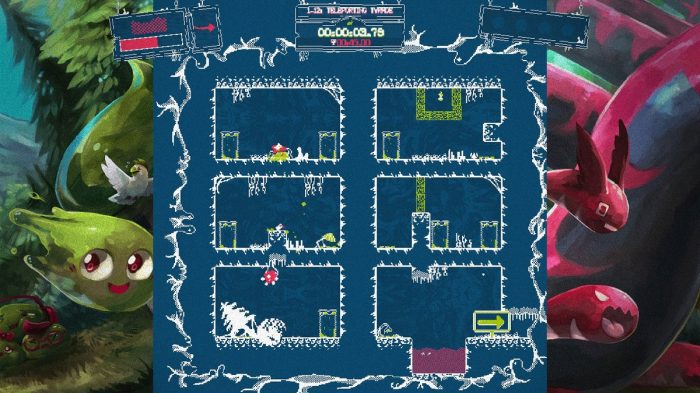 There’s a good chance you’ll be perfecting your Slime-san skills for some time before managing to get through an entire level with zero deaths – some jumps look safe, only for Slime-san to not get enough air into a standing jump and collide with a red obstacle immediately after take-off. It’s these kinds of accidents which can get you so infuriated you’ll need to go and take at least an hour to compose yourself before trying again, but once you do start to maintain a level of perfection this becomes a perfect game for speed-running (if you fancy the challenge). Pitch-perfect precision is clearly needed if you’re looking to pull off respectable times, but it’s clear that the developers had this in mind from the start. As such, the target times which you see at the end of each level are deathly unforgiving for novice players, but Slime-san addicts will get an extra sense of longevity from the game. The perfect runs are attainable, but only with the utmost skill.

The soundtrack – like most like it in the 8-bit category – is groovy. You’ll find yourself bopping away during levels to a mix that works much like the brilliant one used in Angry Video Game Nerd Adventures on Wii U and 3DS. Soon, you’ll even feel like you’ve known these tunes since your childhood.

The pretty NES-era visuals aren’t entirely accurate to how they may have looked in the 1980s, but what is a nice touch is that through the in-game shop you can purchase backgrounds to occupy the widescreen borders of your TV as you play. Some of the designs are quite breath-taking, and you’ll likely be sticking to them as soon as you have the coins to afford them.

Other unlockables include play styles. More trajectory power for dashing in a certain direction, or boosting your jump power are amongst the many benefits you can add to keep your experience just that little bit fresher. You can also buy cutesy costumes for Slime-san – and bearing in mind that each are just a few small pixels, you can tell a lot of love has gone into designing them. 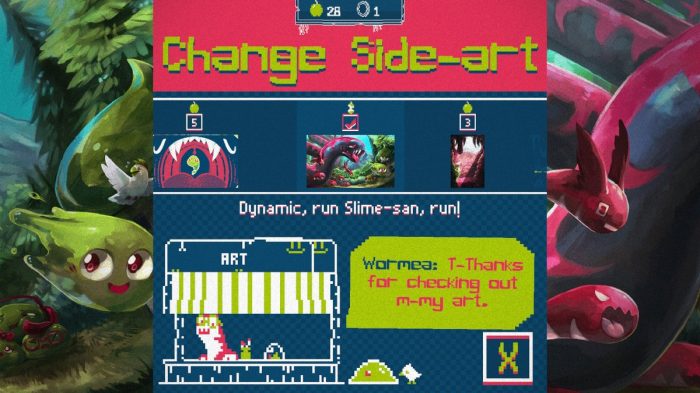 While the main game is for single players only, a two-player local mode can also be unlocked, and with the Blackbird’s Kraken DLC now confirmed as a free future update on Switch there’s certainly more content to come. This is pretty impressive for a game with 100 levels from the off, and a further 100 levels in the unlockable New Game+ mode.

As a whole, Slime-san is a great match for the Nintendo Switch. It’s the sort of game which looks beautiful in its NES-style glory on the big television screen, but looks just as glossy when you’re carrying the console around as a handheld. It’s an incredibly solid frantic-style platformer which you will want to power through to the end, and it’ll be sure to bug you if you don’t.

Slime-san is certainly worth a purchase, both for its charm and its addictiveness. It’s impressive how much personality Fabraz managed to convey with just a few pixels, and it’s here in droves. That said, with your mind on the clock there may not be as much time as story-fans would like to take it all in, but thankfully the gameplay makes it worth playing either way.