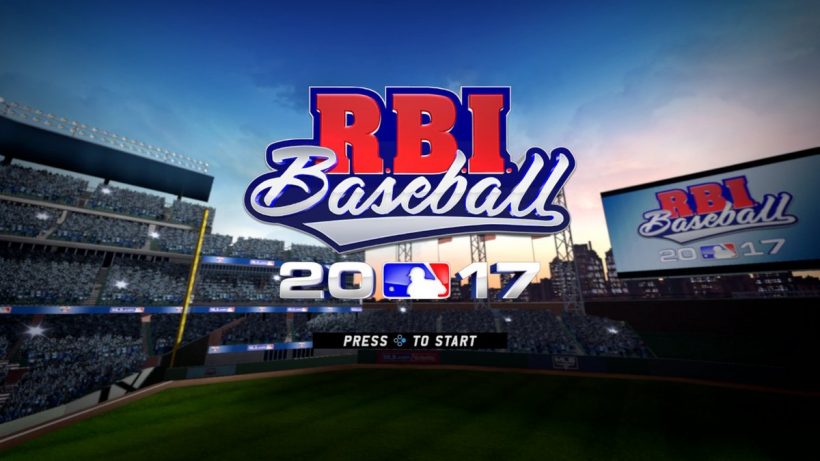 Baseball. That wonderful American sport which just about everyone can get into. Both baseball and rounders, the similar equivalent in the UK, share one major selling point. Everyone, no matter their ability, can simply pick up a bat and have a ton of fun. It’s something that’s almost impossible to mess up.

It’s really hard, you have to say. But sadly, MLB have managed it. RBI Baseball 2017 causes infuriation from top to bottom, from its lazy design to its poor controls, its weak graphics to its sparse list of modes. It’s a shame, too. As the Switch’s first big sports release, a lot of Nintendo fans will have had high hopes for this one. The Wii U went without the genre for much of its life, so this return was meant to be a crowning glory, but instead it’s been a half-effort of a baseball game which doesn’t offer any fun at all.

What were the developers thinking?!

Let’s start by covering the game’s mode choices. This won’t take long. First up is the Exhibition mode, which, as you’d expect, is a one-off match. You pick a side, pick the opponents, pick the uniforms for both sides and get underway. Speaks for itself. Next up is the Season mode, which is the league campaign. Note that all this involves is playing game after game to formulate the league. You can tweak your line-up, and simulate games, but that’s as much of a ‘campaign’ experience as you’re really going to get here. Post-season, the third and final mode, is basically a knockout tournament to those not familiar with their baseball terminology. There’s no online play.

But that’s it. There’s no training mode, no real tutorial and nothing along the lines of minigames which may allow the game to stray from the monotony of just playing game after game of straight baseball.

It’s a game which is crying out for a tutorial, because hitting the ball as a newcomer is nigh-on impossible. Swings are all handled with one button, but there’s almost no way of knowing where the ball is going to sail towards you from the pitcher. One thing that Wii Baseball got dead right was that, no matter how the ball was pitched, there was a chance of the batter hitting it. Just simply hitting the ball, and not getting a foul ball or a strike, is an achievement in itself in this game. The ball can go behind the batter and yet it counts as a strike, but when you do the same thing as the pitcher, it’s you who are penalised again.

It gets so tiresome swinging and missing, swinging and missing, over and over again, simply because the game makes it so difficult just to hit the ball. Then, on the rare offchance that you do hit the ball and it isn’t on its way to sailing out for a foul, chances are the ball’s going to sail directly towards the opposition fielders – who are conveniently always in the right place to halt your progress. The controls when fielding are useless, too; you can simply run using the control stick in the direction of where the ball is going to land, and even that doesn’t guarantee you’re going to catch it. But you’re going to spend more time fielding than batting, and that’s really not the part you want to put the hours in on.

If you don’t catch them out, you’re likely to be running after the rolling ball trying to return it to the base, but the outfielders are dead slow, and the fact that the same button is used to switch between outfielders and to throw the ball is criminal – you often find yourself switching to someone who’s nowhere near the action, and wasting countless seconds as your opponents trot around all four bases. You can throw to specific bases – at least in theory – by pressing a direction on the control stick while hitting the throw button. But even this isn’t done well. The accuracy is off, and you’ll find yourself throwing to first base when you were trying to find second, something made even more annoying by the fact the CPU never mess it up.

It gets worse: the game is a glitch-fest, too. On multiple occasions the game froze, leaving fielders running endlessly against the field boundaries and forcing you to switch the console off and on again. That’s so annoying when each match is so long.

Graphically, it’s the bare minimum. There are no close-up shots, no action replays, not even a little animation showing the players running onto the field as you’d get in just about every other sports game nowadays. Players are differentiated by hair and skin tone; you never see their faces close enough to see their features. Crowd textures hark back to the days of the Gamecube, while the ball itself is just a bland group of white pixels which would probably be hard to differentiate from a NES version of baseball. Perhaps the most unforgivable sin of the lot though is when moving your batter or pitcher – they simply hover over the area without even moving their legs, in a ghostly kind of way. This shouldn’t really happen in the era of the Switch.

Audio, meanwhile, stays true to form by being bland. There’s one track for the menus; certainly no all-star hip-hop soundtrack like the one used by a lot of sports games nowadays. There’s no commentary, just an announcer screaming out ‘play ball!’, ‘strike!!’ and so on. It really is the least they could do.

If the game does have a sliver of a saving grace though, it’s the determination it instills in you to have another go. You will find yourself thinking, ‘I’m gonna hit that ball this time…’. Chances are you won’t, but you will come back for another go for a while after the initial few fits of rage.

If you’re looking for a first sports fix for the Nintendo Switch, sadly RBI Baseball 2017, the first sports title to come out on it (after NBA Playgrounds, at least) isn’t the one you should go after. With FIFA, NBA and WWE on the way, chances are you’d get far more bang for your buck from going with them.

One thought on “RBI Baseball 2017 Review”