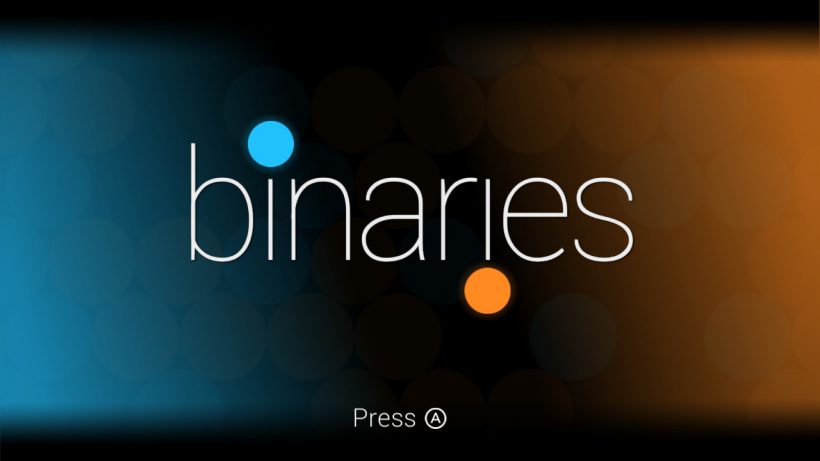 There is something delightful about the sense of accomplishment you get after finally being able to finish a level on hardcore platform games. On games like Super Meat Boy and VVVVVV, you must control a fragile character that must traverse the most challenging levels, while pretty much everything will one-hit kill you. Binaries has this very same mentality, but you control two characters at the same time!

This basic concept is indeed as simple as it sounds. The player will be thrown in different platforming levels and must control two little circles: a blue and an orange one. Your objective is to make both balls reach a chequered area at the same time (easier said than done). Binaries holds up to the very basics of platforming: you can move to each side with the sticks and can jump with either B or A – and that’s it. The difference here is that anything you do will affect the two circles at the same time, and they’ll often be put at opposites sides of the map, with different challenges to overcome.

Binaries executes this concept in a perfect manner. Much like the best platform games you can think of, the very act of jumping and traversing the levels are pleasant by themselves. Jumping here also has the precision that is so important to such a challenging game. This way, you do have total control over the characters. Therefore, if you fail, it’s up on you, not the game – and you’ll fail, many times you’ll fail.

It doesn’t take long for the difficulty of Binaries to ramp up. As you progress, you’ll be gradually introduced to new hazards, such as spikes, turrets, portals, among others. The game eventually adds to that an inner logic that comes in with the characters and scenery colours. The blue circle will only be affected by blue stuff, and the same goes to the orange one. Thanks to that, the blue circle can walk over orange spikes (just to mention an example). The catch then resides on the mix of platforming and puzzle that is Binaries. Because you control the two characters, you must time your jumps considering two scenarios at the same time. This requires some mind breaking logic sometimes, and may induce moments of rage, but the joy of finally finishing that 100-deaths level is unprecedented.

You can see that Binaries main focus is all about the gameplay. Though its visual style is a pleasant one, it is rather simplistic. It doesn’t really try to take your attention from the platforming action, being mostly formed by blue/yellow maps with different formats. The music is delightful, though, and seems to follow precisely the split-second platforming thrill of the game.

Unfortunately, if you’re not into the hardcore platform genre, Binaries may not have much more for you. The game has a total arcade vibe, and it’ll reward you with better grades depending on how fast you finish each level. You also have 100 different levels, that will really challenge your skills, but, other than that, it does not have any type of narrative other than some funny jokes and questions on levels, here and there. If what you need on your Switch library is a hardcore, soul-crushing platformer, then I can’t recommend Binaries enough.

Binaries offers a different take on the platform genre. By putting the player in control of two characters at the same time, it offers a mix of platform and puzzle that will be as challenging as the most hardcore games. Having its focus on gameplay and time attack, it’ll please those interested in arcade-like experiences.