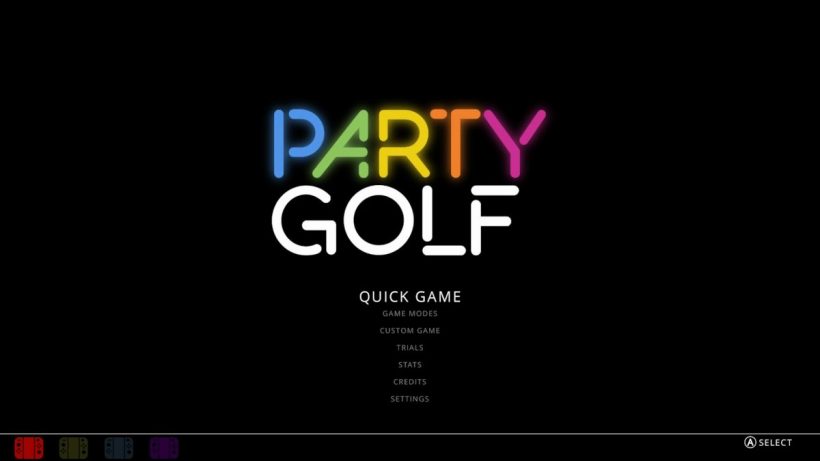 It’s been a good few weeks for golf titles on the Switch. Golf Story, it’s fair to say, has outdone itself with the amount of Switch libraries that it’s managed to earn itself a place in. There’s a good chance Party Golf ought to do the same.

The premise of this one is a bit more simple than your traditional golf title. Yes, the aim is to get the ball from your tee into the hole, but rather than turns, it’s a race against the clock. You have to negotiate obstacles, steep drops, uphill climbs and other hazards in order to do so, and the first one to get into the hole is the winner. It’s frantic stuff.

Each of your shots leaves a trail behind it, so fellow players are able to see where you hit your most successful shots from, and the trajectory you used in order to make the shot. It’s the price to pay for being successful, but it’s certainly not a walk in the park for the other players to get their ball in the right position in order to do so. Balls can cannon off one another, hitting you in all sorts of directions that you don’t want to go or becoming the stroke of luck you need to find yourself where you need to be.

Those trails will soon cover the screen if you spend too long struggling to get over an obstacle. There’s a set time limit to get the ball in the hole, which can be accelerated when the first person sinks a shot. Any players who haven’t potted within the time limit will be judged on their final distance away from the hole. It is just wonderful stuff as far as multiplayer fun goes; with a max of eight players able to take part.

Party Golf scores a 10/10 for replayability, and offers 100 modes – quite an extraordinary number of ways to put a spin on the simple game of golf. While a lot of them will feel similar, a lot of them adjust the mechanics quite a bit: you can replace everyone’s ball with fruit in one example, which will, of course, change the way your shots catch and roll on slopes.

Elsewhere, you can select power-ups, which can have the effect of tying a rocket to your ball to give it that extra bit of momentum to make it across a large gap, or alternatively reducing roll and having the ball stick to impossible surfaces. You can fiddle around with all of these components in the custom game mode – say you want to reduce the light, or fill the environment with explosives – you can do it.

Party Golf is definitely a great party title – certainly more likely to get people on board than the likes of the Jackbox Party Packs. The maniacal franticness, easy-to-pick-up nature and difficulty shared across the board mean anyone can get involved and anyone can win – that’s the sign of a great party title, especially when you’re enjoying yourself in the meantime.

Party Golf has loads of modes to keep you busy, and offers loads of fun to bring you back. Gather some friends together and you’ll have a bundle of fun, but it’s also good fun playing against some CPUs. It’s perhaps forgiven at not having some kind of story mode by the sheer depth of modes available – pick it up. I’m sure you’ll have fun too.