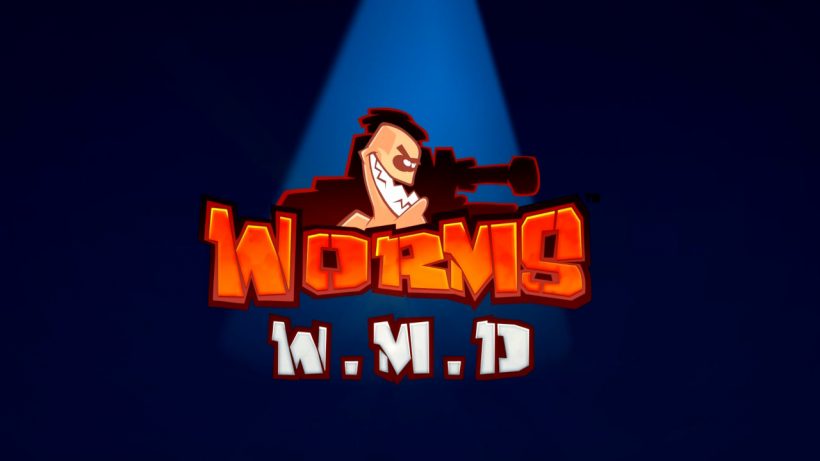 Worms W.M.D. pits teams of pink invertebrates against one another in a world inexplicably absent of humans yet loaded with ridiculously and comically over-the-top weapons. Your high-pitched warriors take it in turns to perform feats of physics-based weapon launches in the hope of annihilating the enemy team.

Yes. It’s Worms and for the most part, the gameplay hasn’t changed a great deal since the original back in 1995. The difference, this time, is that instead of sitting in front of my friend’s PC taking turns with a keyboard and mouse you can now take the full Worms experience on the go thanks to the Nintendo Switch.

It’s not all the same game from the 90’s though. Worms W.M.D. may be looking to its roots for inspiration but it isn’t afraid to bring more crazy, over-the-top artillery to its stages. There are random placements of tanks, drillboats and even mechs. These allow your wrigglers to take shelter and traverse the terrain. When used correctly, these can be devastating to an unprepared foe. Alongside the vehicles there are a number of turrets that are placed on the map. You can mount these and launch a shocking volley of rounds at any nearby adversaries.

All this can seem a bit overwhelming when you’re just dipping your toe back into the game which is why the tutorials are so welcome. These give you the lowdown on how to use the various weapons and tools found in your arsenal. It’s not just a simple how-to. Each tutorial has a rank and records your best time. If you want to hone those physics skills this is a great way to do it.

Those that have played the original games will feel right at home as the move to a 2D engine has brought the physics back in line to what made the franchise so successful in the beginning. The movement of the worms and weapons as well as the damage and recoil seem to feel so right. I’ve never been a huge fan of the 3D incarnations because of the changing dynamics so this is an absolutely essential point that Team17 have nailed.

The single player campaign is a series of one-off levels interspersed with some comical cutscenes. There is a reasonable number of levels, with unlockable additional challenges. Plus, bonus content is included such as an Escapists stage in which you need to reach a crate to prove your innocence. They are fun diversions and have secondary objectives that any completionist will enjoy whiling away the hours with.

It’s worth giving a mention to the art style at this point. Worms W.M.D. is a gorgeous game. The new engine isn’t just a physics boost. The worms themselves and drawn and animated cleanly and fit nicely against the levels. Considering that these stages are usually procedurally generated, it’s impressive to see everything fit together so seamlessly. Especially when you factor in that there is an additional feature in Worms W.M.D.: buildings.

On any given terrain there are opportunities to hide or simply take shelter inside buildings. The overlay disappears when you enter these spaces to allow you to see walls and ceilings while you crawl around. Of course, this reveals yourself to the opposing team while you enter these structures, but they add another strategic element. It all gels together nicely and reveals the additional backdrop art in these spaces, demonstrating the extra level of care taken.

Unfortunately, the ball has been dropped in one area of the game. The in-game text and menus are packed with information and options. It’s fine for the most part but I found myself constantly squinting at a 50” TV sat only a few metres away. If you’re playing on tabletop mode, you and your buddies need good eyesight because those weapon icons are miniscule. I cannot understand the need to cram everything into a tiny space ­like this when so much effort has been put into the gameplay. It doesn’t make the game unplayable by any means, but these elements do feel a little thrown together.

When it’s not your turn, it doesn’t mean that your worms should be idle. There’s a new crafting system in which you can find bits and pieces in loot crates dropped during your battles. Your worms can upgrade your gear to create more destructive and dangerous munitions. It allows your team to go from a zany set of weapons to something even more chaotic.

The multiplayer options in Worms W.M.D. are well thought out. I was sceptical that you’d be able to use the split Joy-Con with the game but was pleasantly surprised to see a control scheme available. Worms uses a lot of buttons on the controller, and Team17 have smartly opted to use every single trigger on a single Joy-Con. SL and SR as well as the two triggers are utilised to make sure that you can still move, pan, zoom and do anything that your buddy using the Pro Controller can. Of course, if you don’t fancy sharing the joy, the option to just have a single controller that you pass and play is also very welcome.

As with most Worms games, online is also available for those that don’t have friends nearby. These come in the form of ranked and unranked modes to help you balance yourself against other players. An extra treat on the Switch is added local play. If you’re close to another Worms-playing Switch owner, you can open up a room and allow the zany sheep swinging, banana bombing chaos to ensue in the very same room.

Worms W.M.D. encapsulates all of the fun elements of the Worms series while harking back to its roots to create a modern and fun version of the original games. Pair that up with its crisp art-style and various multiplayer options and you would have to go a long way to find such a perfect match for the Switch.

Worms W.M.D. isn’t the most original entry in the series. Rather, it’s a modernised version of the earlier games. It may not be the best single player game either, but couple it with the portability and various multiplayer options of the Switch, Worms brings a fun and frantic game that is always best shared.

One thought on “Worms W.M.D. Review”