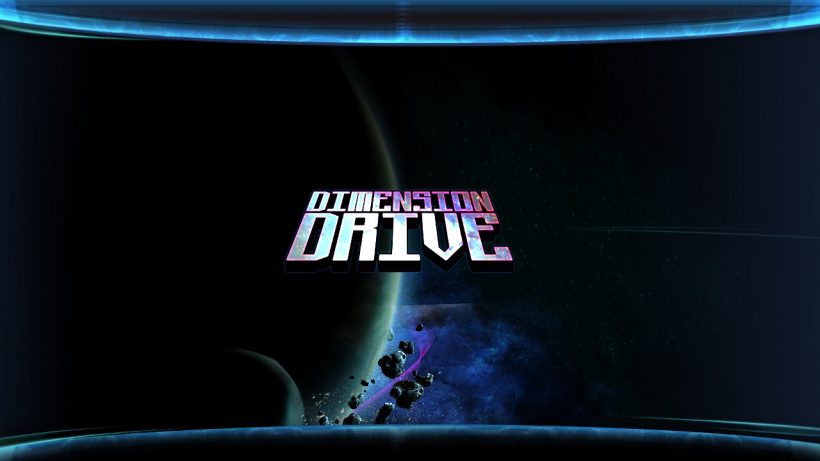 Taking the Shmup Genre to a new dimension.

Dimension Drive takes place in the distant future, where an alien race known as the Ashajule has conquered thousands of civilizations and have assumed control of the majority of the known universe. The lone survivor of one of these civilizations is a human known as Jacklyne Tywood, who has discovered that the Ashajule used technology known as Dimension Drives in their conquest and has recovered some of this technology to use for herself.

Using this technology Jack has built herself a ship known as the Manticore which comes equipped with an A.I. known as V.E.R.A. to help her in her adventure as she vows to take back the universe from this evil, who have learned of Jack’s plan and have attacked her adopted home-world in retaliation. 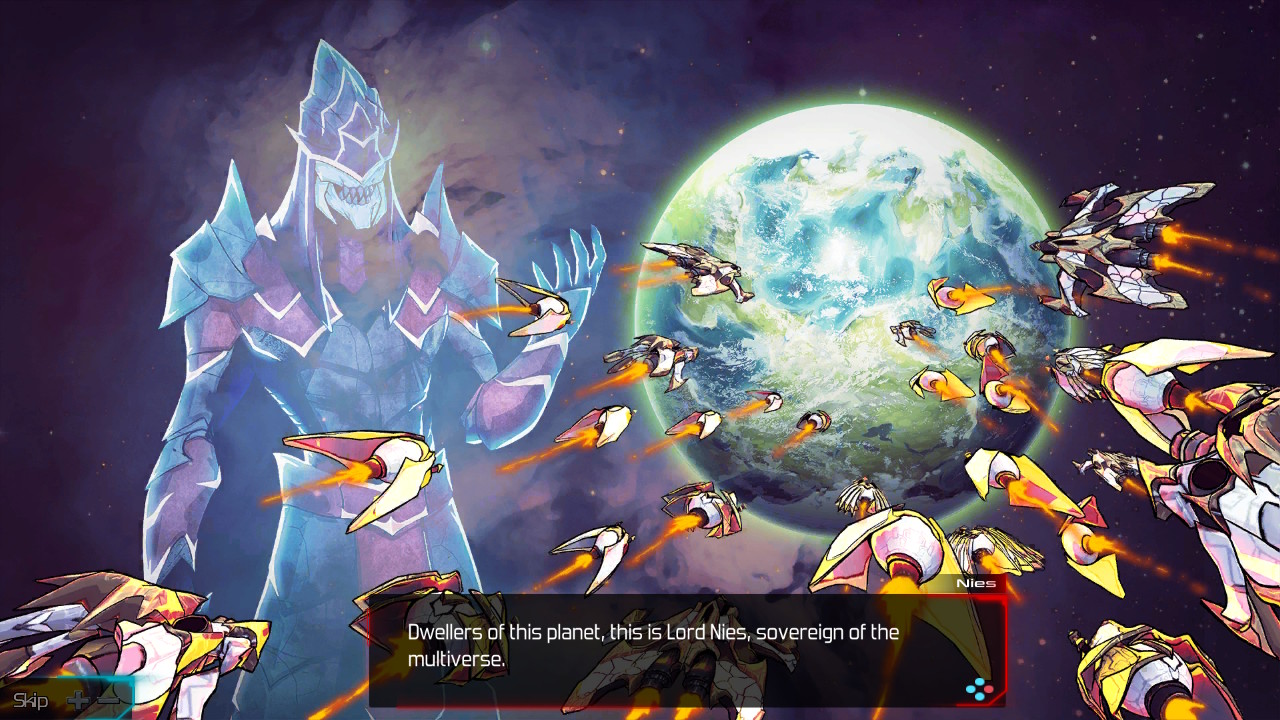 The gameplay of Dimension Drive is quite unique, in that you’re essentially playing two levels at once. Your ship will start off on the left-hand side screen however, with a press of the B button, you can teleport and flip over to the right-hand screen; you can do this at any time. At the top of the screen you’re given a power bar, the more you shoot your beams with the Y button, the more your power will deplete, however changing to the other dimension will give that power bar time to charge.

Dimension Drive has four separate difficulties, Normal, Hard, Insane and WTF mode, these difficulties determine how many lives you have and how many shields you have, as well as determining whether you’ll be able to recover shields by picking them up from defeating enemies. Enemies will also drop weapon power-ups which will increase the strength of your ships weapons. 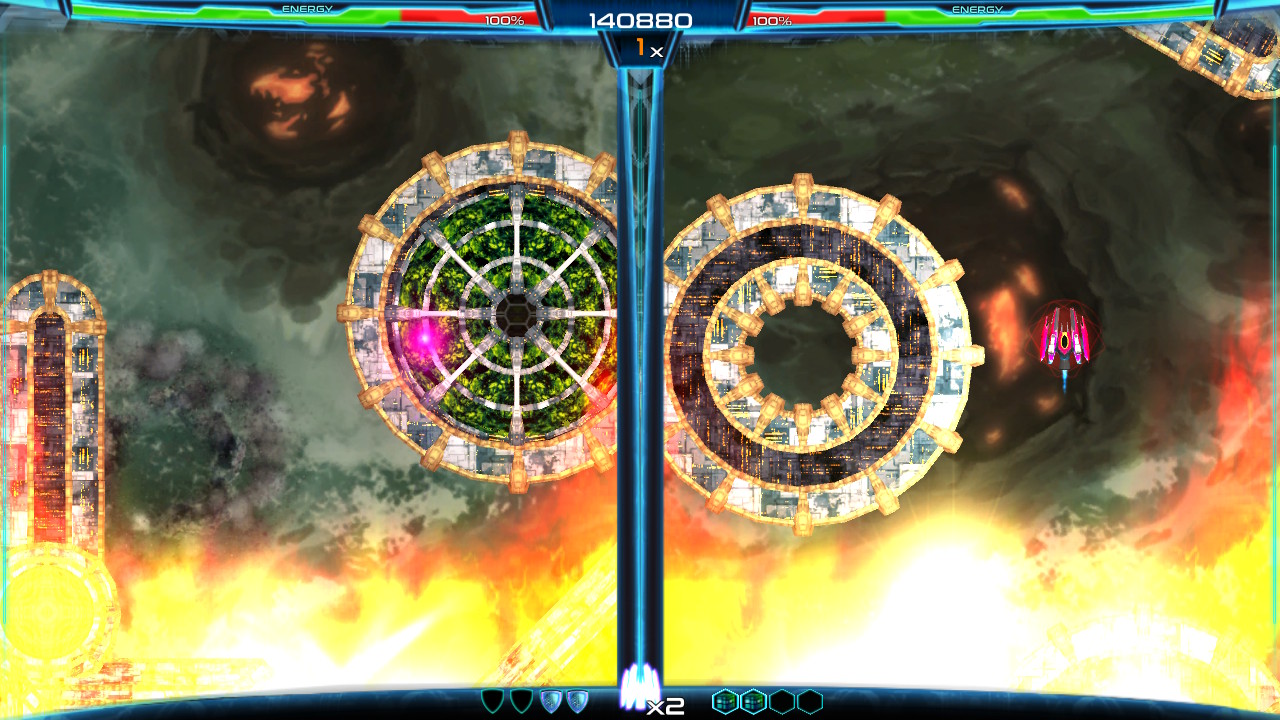 The dimension changing dynamic works well when you find yourself in a particularly difficult point on one side of the screen. For example, if you find yourself swarmed with enemies on the left screen, you can check the right-hand screen to see if that side is easier to traverse. The only thing you need to worry about is if when you teleport you do so directly into a wall, which will deplete one of your four possible shields.

Dimension Drive is a relatively short game overall, taking around an hour to complete on normal difficulty but higher difficulties will naturally take longer to beat. It is spread over 3 worlds – each home to 4 different levels. Each world has a different appearance and never outstays their welcome. The soundtrack is also fantastic and really gives you the feeling of being on an epic sci-fi adventure. The main thing I disliked about the presentation was the design of the main character in the comic book style cut-scenes, there was just something about her design that I found off-putting. 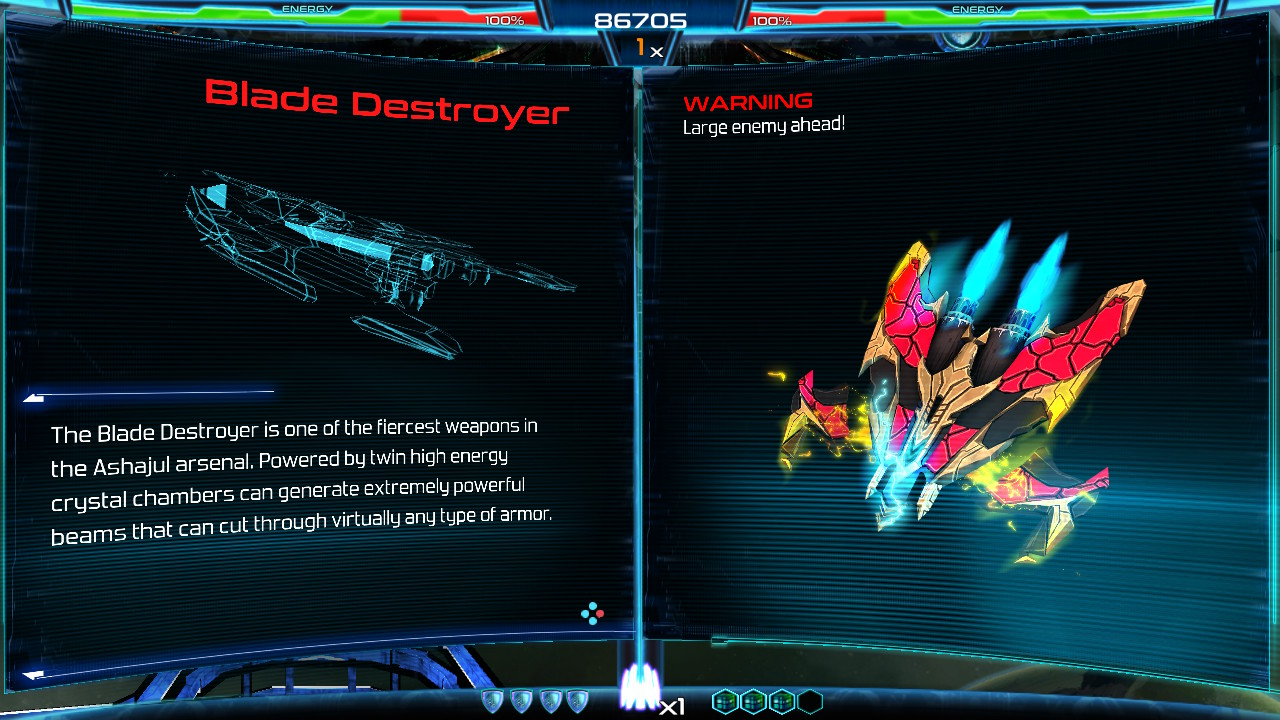 While short Dimension Drive is also rather difficult, even on the lowest difficulty you may find some of the earlier levels rather challenging, especially if you’re new to the shmup genre, however this makes the game feel more rewarding when you do complete a level, only for you to see the next stage and feel that sense of dread all over again.

Shmup’s seem like a perfect fit for the Switch and Dimension Drive helps cement this, it has its issues with difficulty and a few small presentation issues that stop it from ultimately being perfect, but whether your a fan of the genre or not, it’s certainly worth a look.

Dimension Drive is a fantastic addition to the Shoot-em-up genre and the Dimension swapping mechanic is implemented incredibly well into the game, just don’t expect an easy ride.