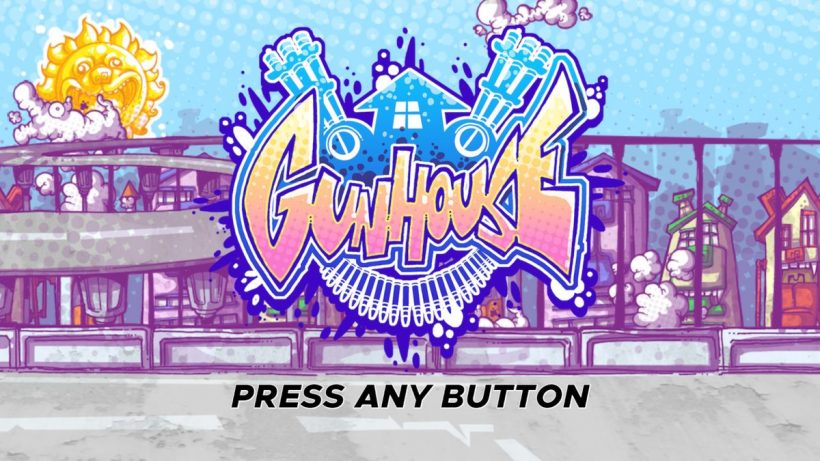 Is it a tile-matcher? Is it a tower defence? It’s both, it’s Gunhouse

With so many tile matching titles filling up the Switch’s eShop now, it’s becoming increasingly difficult for titles to offer something new. Gunhouse tries to address this by blending the genre with a tower defender, so here we have a mix of two of the most prominent genres in mobile gaming. Whether that makes it the ideal genre for playing on Switch is another question, of course.

The overall aim of the game is to build up an arsenal of ammo so you can protect your tower from enemy waves coming from the side of the screen. To do this, you’ll have to be speedy in the matching tiles section.

Essentially, you’re able to select from rows (not the columns) and move them from side to side to create spaces and hopefully create a gathering of tiles of the same colour. When you manage that, you’ll need to shift these (now-merged) either to the left side, where they get turned into a mounted gun of a type dependent on the colour of the block that you’re shifting, or to the right you’ll get a special attach, distinguished in the same way. The controls here are fiddly and it’s tough to build up a series of combos in the limited time allowed – sadly, it mostly came down to luck rather than judgement in my experience.

It’s at this point where the gameplay switches to that of a timed shooter tower defence. I say this, because time is the only real factor that the player can contribute to. For all of the combos that you generated in the puzzler section, you will have representative guns and special attacks at your disposal for this section.

The weapons you get are all dependent on the colours of the blocks which you matched previously, and also dependent on where you matched them in the tower. There are a set number of gun slots to make use of, but if you made all of your matches at the bottom of the tower, you’ll have no guns towards the top, making the challenge of the shooting bit more difficult.

You can’t aim the guns, you’ve just got to time when you use them. It’s wisest not to just splurge all of your ammo as soon as you get a chance to use it, then, as the enemy attacks will be spread out across a set period of time, so firing too early puts you at risk of leaving yourself open. You have a set amount of hearts to represent your health – allow the enemy hordes to get too close and they’ll take away your health, as well as abduct the orphans that you’re supposed to protect from within your tower.

Control-wise, Gunhouse is a game which can easily be played just by tapping or sliding across the touchscreen, hence its mobile beginnings, and this is by far the preferable option, as the necessary accuracy just isn’t there with the buttons. The visuals are bright and pleasing, but the music, though, is predictably annoying.

A hardcore mode makes things tougher and takes away powers, but doesn’t quite make the purchase worth it. It’s always tough to recommend a game which is available for much cheaper elsewhere, and sadly that’s something Gunhouse doesn’t manage to overcome.

Things are just a little too repetitive here for a recommendation. For what it’s worth, Gunhouse does offer some fun, but it’s not the sort of earth-shattering experience to fork out your extra dosh to have it on Switch.