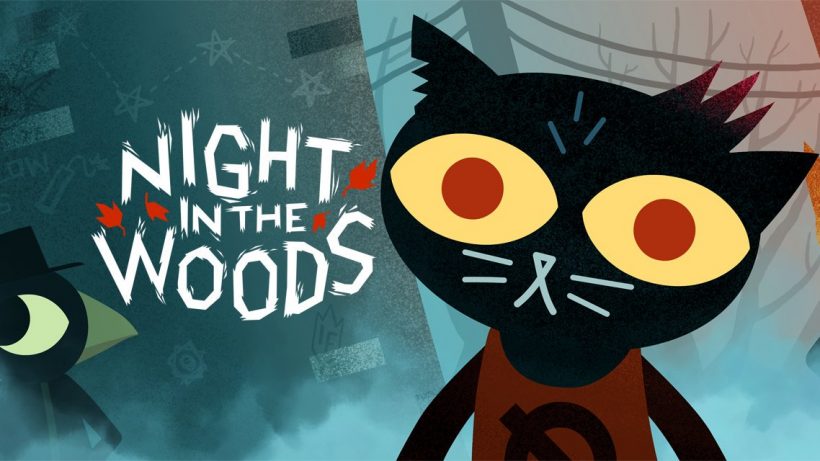 Night in the Woods, the critically acclaimed adventure game from developer Infinite Fall, has made its way onto Switch this month. It’s an atmospheric, emotionally engaging experience, culminating in a shocking crescendo that I tried (and failed) ever so hard throughout to predict. I loved it.

Night in the Woods puts you in control of Mae Borowski, a young adult college dropout returning home to the dying, middle of nowhere town that is Possum Springs. Re-uniting with former friends and trying to think of what’s next, the game structures itself nicely into a seemingly normal, mundane daily routine, a Groundhog Day-esque, repetitious trance that is Mae’s life as she struggles to come to terms with it. The tantalising threads of intrigue and exposition dotted throughout each day in among passing comments and thought bubbles, combine with the frequently eerie setting to create an engrossing story throughout.

Encapsulating the tedium of quiet village life, Night in the Wood’s pacing is very purposefully meandering, and can almost edge into monotony, especially in some of the soft-platforming dream sequences. Thankfully, the vibrant presentation of the game, a meld of the beautiful visuals and stunning animation quality (I truly felt I was watching a cartoon throughout) meant that there was never a dull moment when walking from screen to screen. The sounds of cars passing, birds playing and leaves blowing in the wind draws you into the world whilst you stroll through the streets, and the game perfects the mundane with frequent, dynamic little events that are in some instances completely optional to the main game. Partner this with the charming character designs and you’ve got a world and story that feels real and not just another level.

Chloi Rad, in her review for the earlier released PC version, mentions the accuracy of political factors in America that this game touches on. Being English I have no connection to those factors whatsoever, and I still related to Mae as an angsty, somewhat troubled young adult. Plus I like cats too.

A constant drip feed of anticipation, Night in the Woods reminds me of Campo Santo’s Firewatch, another independent title known for its visuals and narrative, in the way that it builds throughout to an interesting climax that I could not have expected. I won’t spoil the experience, as it’s something you should discover yourself, but the end of the third chapter presents a riveting curve-ball, shifting from meandering melancholy into a faced paced, tense final quarter.

The story drops you in with an ambiguous setup that sets the tone for the rest of the game and draws you into the mystery vibe. From the moment you spot the missing person notice you know something is afoot. Halfway through my play-through, I was thinking of all the possible outcomes, whether I was overthinking the outcomes and whether the game was trying to implicitly make me think of something else. Night in the Woods, I think, purposely captivates your imagination to achieve this brilliant puppetry of preconceived expectations.

A testament to the level of polish attained, Night of the Woods provides an abundance of little bells and whistles that supplement the simplistic, narrative-driven gameplay. From pizza grabbing to knife play-fighting, even reaching for a drink from the vending machine, these little interactive visual nodes give the game a personality that the characters and their Animal Crossing-esque charm only serve to further. Thanks to resident tech guy Angus, there’s even a fully fledged mini-game within Mae’s computer, evocative of the original Legend of Zelda with its secular dungeon design and combat.

If that wasn’t enough, the Switch version also features a fruitful basket of extras, with unlockable concept art, and even two smaller game experiences within the Night in the Woods lore, originally released to backers throughout the game’s Kickstarter development. Brilliant. It’s also worth mentioning here that the Switch version of the game runs absolutely perfectly in both handheld and docked mode. Playing in bed late at night with the maximum brightness display illuminating the room was my preferred choice. There isn’t any touch screen or HD rumble integration, but there isn’t necessarily any room for it, and I would hasten to say that vibrating your palms slightly when trying to engross yourself would feel a bit obnoxious.

I don’t think I’ve ever played a game that handles phatic dialogue as well as Night in the Woods. Sometimes pointless, sometimes funny, a lot of times poignant,  It’s narrative games like Night in the Woods that push the medium forward, and in turn have it taken more seriously alongside other storytelling methods such as film and television. Often cringey teen jokes and dialectal slang can take you right out of an experience, but this game feels just right. This is owed in large part to the strong, core group of characters in the story (Mae’s friends Gregg, Bea and Angus), who bounce off each other nicely with their varied exchanges. Depending on who you align yourself with more, you can even customise scenes slightly, with light progression handled well through an in-game notepad mechanic similar to the Life is Strange series. It’s an elegant inclusion that gives you even more of an insight into the way Mae thinks, even if she isn’t willing to say it aloud.

Overall, Night in the Woods is a Special game. My only gripe would be the slow pacing, but again it’s hard to criticise when the payoff is so much better because of what I feel is a purposeful choice on the part of the developer. I don’t know if I learned anything or understood it, but it made me feel something. That’s some bumper sticker stuff right there.

Night in the Woods

Night in the Woods is a special game and a must-have for the Switch in 2018. With some of the most well executed, naturalistic dialogue I’ve ever seen in a game, it’s an experience that is different, but up there alongside some of the greats on the platform so far.