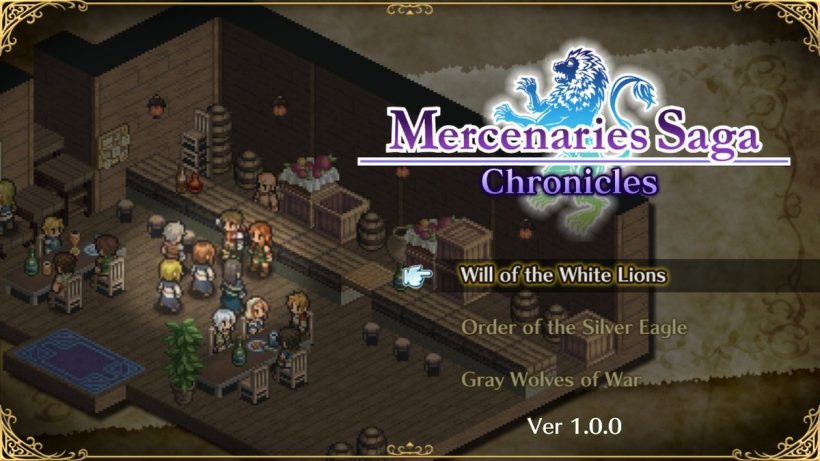 To be this good takes Agas

Something I really love seeing on the Switch is games that didn’t get a release on Nintendo systems the first time around. So, a game like Mercenaries Saga Chronicles, which encompasses all three games in the Mercenaries Saga series, is a sight which gives great joy, particularly considering this is the first time that all three games have appeared together on a Nintendo console – the second and third games in the series both got releases on the 3DS eShop, but this is the first time that the original game has released on a console.

Parallels can easily be drawn with games like Final Fantasy Tactics, both in terms of the look and the overall gameplay. Position your team all across the board – you get to choose certain spots to drop them in, and can then select any of your party to put on any of those spots –  and pair them up with members of the opposition, and hopefully judge your tactical placement just right so that you won’t take damage from an unexpected direction. You are able to throw projectiles if you can’t move within close range of the enemies, or even if you want to save getting hit.

One thing to watch out for – when moving a character, you’ll be able to choose the direction, front, back, left or right, that you want them to end up facing. Be careful, as taking damage from behind is far worse than in front.

A levelling up system means you can take control over the stats and characteristics, and taking them through their classes, separated by their character types, will offer more assets to your team of fighters.

There are eighty-two chapters to play through in total across the trilogy, meaning you’re getting a ton of game for your money. Couple in the fact that the inputs you make can affect the endings and storylines, then there’s a lot a replay value going on as well for fans of the game.

But there’s a ton to take in, of course. What you’re essentially getting here is three tactical RPGs in one, so there was always going to be a truckload of reading to do. But, if reading and storyline are your thing, which they are for me, you can set the game at a low level of difficulty and ease your way through it without taking on too many issues along the way.

Visually, the game is presented in a pretty unique (at least for modern games) 3D cube-like effect. A grid terrain includes levels of varying heights, offering warriors of certain classes combat advantages depending on where they’re standing. Everything is isometric, so you won’t be getting any radically different layout from level to level. But it would have been much nicer to be able to shift the camera around a bit and see the entire battlefield from a range of viewpoints.

Mercenaries Saga Chronicles gets top marks for cramming the trilogy at an affordable price. It’s no Final Fantasy Tactics, sure, but there’s plenty enough for RPG fans to get here.

Mercenaries Saga Chronicles should be commended for giving Nintendo fans (and Switch owners) the full trilogy to sink their teeth into, rather than picking one of the three games. It’s a quality, welcome addition to the eShop.