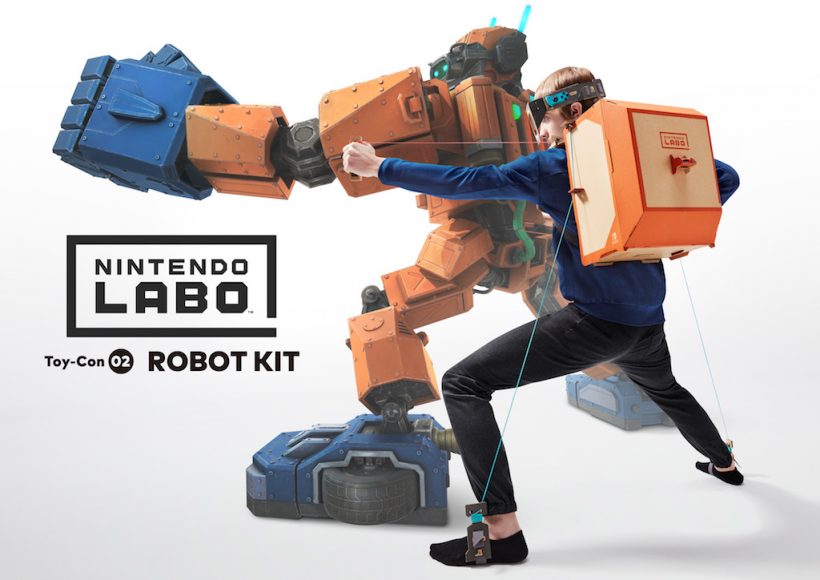 If you’ve read my thoughts on the Nintendo Labo Variety Kit, then you’ve probably got a good idea about what Nintendo Labo actually is and what it entails. This then will set you up nicely for the second creation set, the Robot Kit.

Now, when I first learned about the Robot Kit, this was the one that was calling out to me. To act as a virtual robot, smashing and shooting stuff, stomping around and just messing about? That sounded like a bit of me.

So after three hours on a sunny Sunday afternoon, I was finally able to build this impressive cardboard creation from around 19 different sheets. Following the same instructions as the other projects – all delightfully Nintendo and charmingly presented, and very easy to follow – I eventually managed to fashion a visor, a backpack and some pseudo hands and feet and managed to attach them all together. 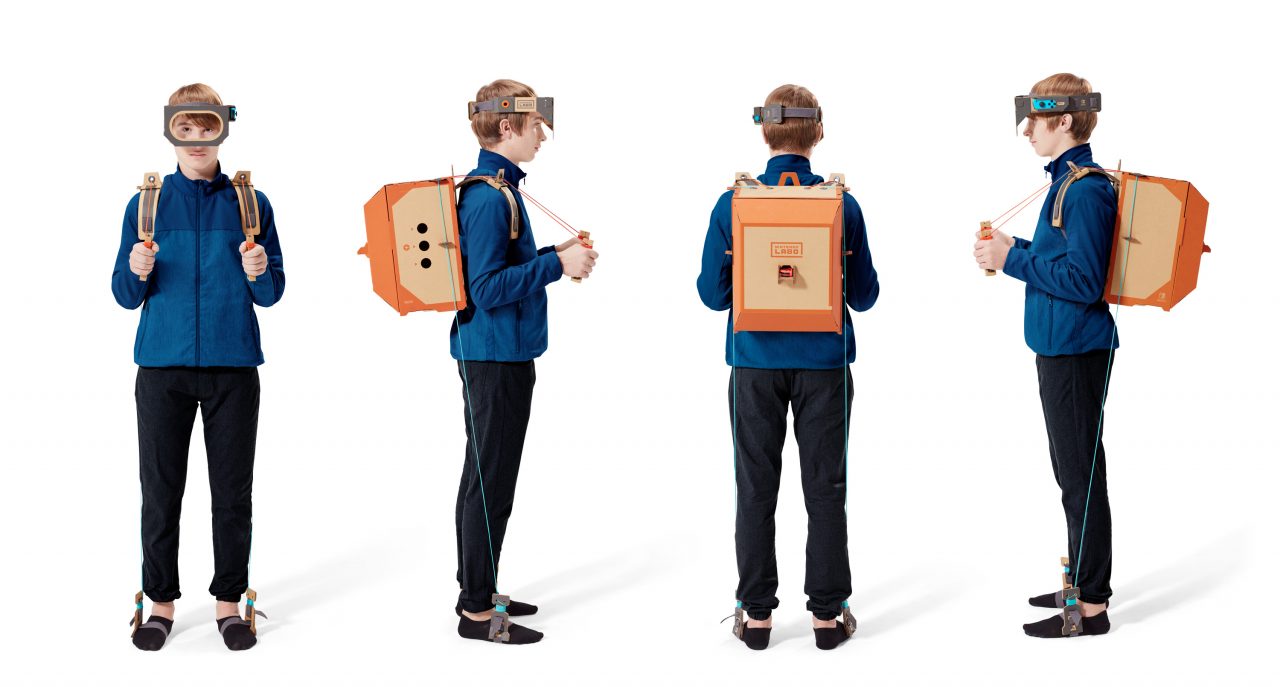 It was then time to actually try them out, but not before my youngest stole in, and said that she wanted to test drive the thing. Typical, she offered little help building the thing (because it was taking too long) but couldn’t wait to use it. Being the nice dad that I am, I duly obliged and within minutes (after ensuring that everything would fit her smaller frame) she was away.

Gripping the hands, she was soon pummelling away in her surroundings, demolishing everything in sight. She threw her fists about, with the movement replicated on the big screen and by walking on the spot she would actually move on the screen too.

It all works incredibly well, and it’s so simple really. As part of the creation process for the “backpack”, you’ll manufacture a cardboard pulley system that sits on “rails”. There are four in total, each corresponding to a hand or foot, and each pulley is attached to its own “weight”. These weights all have reflective tape on them and point at the right Joy-Con, which inserts into your back. Therefore whenever you move your hands or feet, it’s picked up by the IR camera in the base of the Joy-Con and transmits into the game. 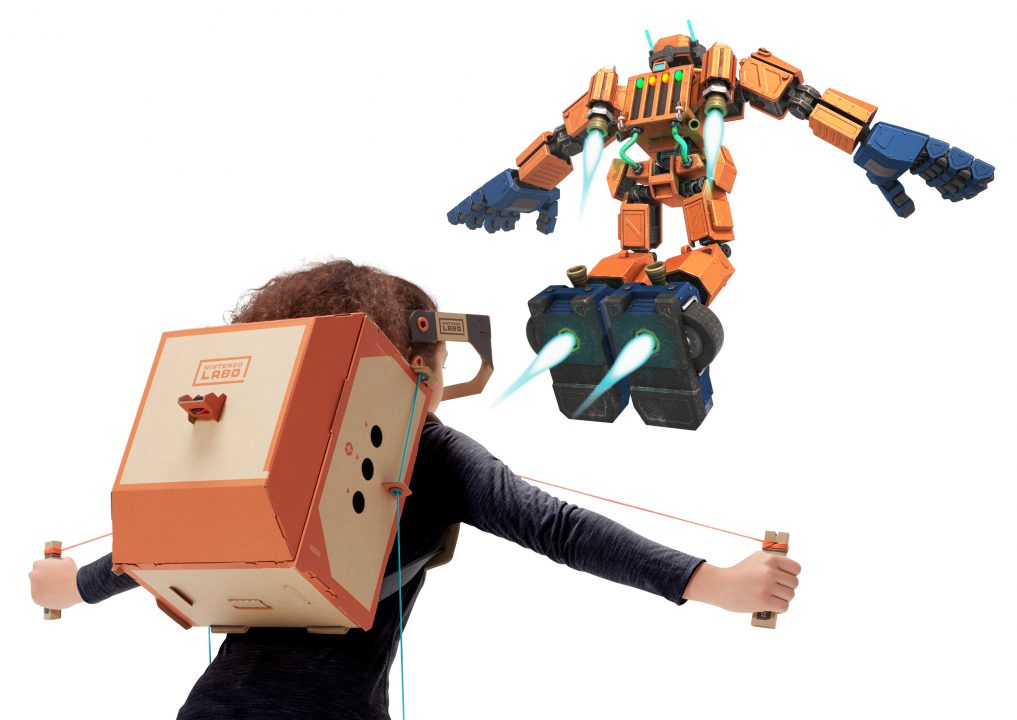 Other movements activate other effects, bending at the knees sees you “transform” into a vehicle, Optimus Prime style (the robot does sport a similar style and colouring mechanic) and holding your arms to the side by your hips ensures that you blast off into the sky. There’s also a move where you stand on one leg and raise a hand to become gigantic temporarily.

It’s all rather impressive to watch, incredibly exhausting to actually do (hence why it has a “calories” option, tracking your burned off statistics) and, disappointingly, all gets old rather quickly. There was only so many buildings and flying objects that I could gain satisfaction from decimating. The kids, though, couldn’t get enough of it!

Although I wasn’t in a position to test it out, you can also play alongside another Robot Kit-owning fanatic and duke it out in a gigantic mechanical deathmatch, which I’m sure would actually be quite a lot of fun. Although, also quite a bit like ARMS in terms of the flurry of arms and punches that you’d be pulling off. And ARMS is much cheaper than TWO Robot Kits… It’s hard not to be impressed with Nintendo Labo, and this Robot Kit really is the crowning glory in terms of what can be achieved, but I can’t help to have been more impressed with the variety and longevity of the other package, and I think that the sales of the Toy-Con 1 kit would indicate that many folks feel the same.

It’s undoubtedly something to talk about, and if you are the kind of Nintendo Switch fan that just has to show off all the cool stuff it can do, then the Robot Kit is probably for you – if you have a spare £70 to throw down on it. However, with Switch games coming thick and fast, and E3 only sure to add even more things to our wish lists, this may be one purchase too specialist for some.

It’s more expensive than the Variety Kit and although initially more impressive, is perhaps even more niche and surprisingly suffers from getting old much quicker. If you have a burning desire to unlock your inner Optimus Prime and have £70 that you want to throw down, then you’ll be impressed.