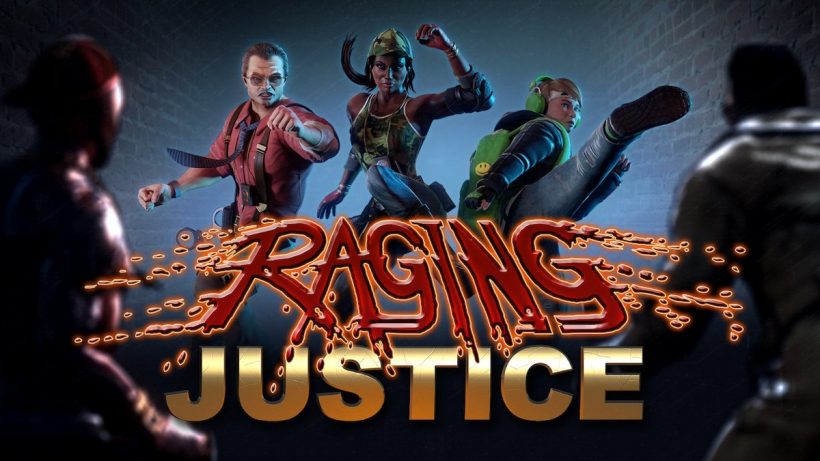 These are some raging streets…

It doesn’t take a genius to figure out the source of the developers’ inspiration for Raging Justice – it’s got some of the name in the title, after all. But while Streets of Rage had gamers lusting over a fistfight on the sidewalk back in 1991, nearly thirty years on the experience is sadly not quite as memorable.

The presentation is immediately very much like the Sega classic, with a bit of backstory telling us that our heroes are out to protect their city before you select one out of the three of them to go on an ass-kicking rampage. From there you’re walking through the streets, bars and alleyways in search of people to punch. I was impressed with the visuals, which blend some pretty detailed character models against the pre-rendered backgrounds. Despite obvious graphical superiority, it was this which harked back the best to the Streets of Rage days.

Each of the face buttons have their own function when it comes to fighting. B is the traditional jump, best used for evading attacks and moving into a position from where you can unleash a beatdown. Y offers punches, X unleashes kicks and A performs a grapple, from which you can unleash some close-range beatings or monkey flip your opponents to the opposite side of the screen. You can also do a dash left, right, up or down by double-tapping the directional buttons (you don’t need me to tell you that the buttons are preferable to the control stick for an authentic experience of a game of this type), but the accuracy feels a little off here, and you’ll often surge right into an oncoming kick because of the lack of control at your disposal.

As far as the overall experience is concerned, it is the controls which are the frustrating element which irritatingly tear at the seams. Building up combos doesn’t feel particularly natural, and dodging enemy attacks is tough even on the easiest of the game’s three difficulty options. There’s a lot of swing-and-miss going on here, and though the playing field is helped with a great range of weapons, some of which offer the chance at one-hit KOs, it feels just too hard to make it through the level without being forced to use continues. There are points where you’ll take damage immediately after getting to your feet with no hope of escape, which can whittle down your health too rapidly for my liking, particularly on the hardest setting.

Money falls from downed enemies and others will stand dazed to allow a chance at arresting them, but when you’re focused on trying to whack everything in sight, it’s annoying to accidentally deliver a swift roundhouse kick to the head and destroy all your enemy’s HP, particularly when the optional side-missions require you to pull off the more delicate arrest on specific enemies.

Grabbing a friend for co-op improved the experience immensely, and that’s most definitely the recommended playthrough style. This is about nostalgia, after all, so plonk the two of you on the floor around the TV and get fighting. Beware, though – you can hit each other and take down each other’s health, which, while hilarious, makes you an easy-difficulty-loving wuss if you turn it off. These streets ain’t made for wusses.

Raging Justice offers as-it-says-on-the-tin beat-em-up action, but irritating controls make it not quite the seamless experience it could be. Fortunately, co-op and leaderboards will keep you coming back.