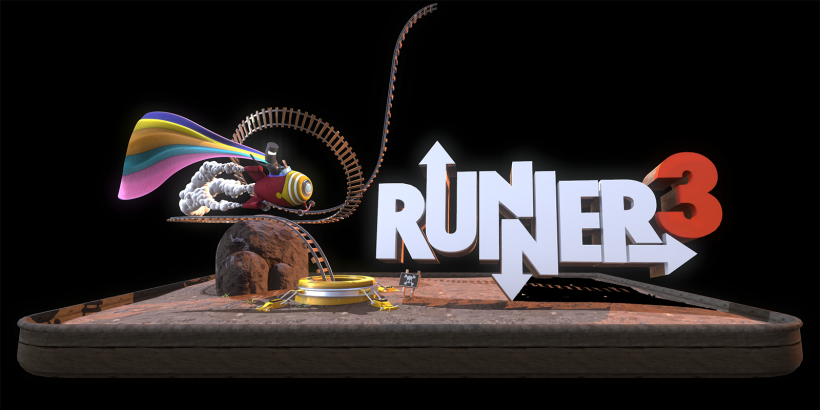 Commander Video has become a revered name among indie icons by this point, featuring frequently on Nintendo platforms throughout the years and even making his way into Super Smash Bros. on the WiiU as an assist trophy. It’s no surprise then that he and friends are returning to Nintendo’s new platform with Runner3, the newest continuation of the tried and tested ryhtmic platforming formula. Not only is this title a console exclusive on Switch for the moment, with PS4 and Xbox One counterparts planned for the near future, but It also gets a physical release in the US, published by Nicalis with some neat extras. The game is a blast to play as always, but it doesn’t quite jump its way into the upper echelon of platformers that the Switch has to offer…

Being the third in the series, Runner3 has the same tried and tested rhythmic, precision platforming we’ve  come to expect from the games, and from the start you’d better bring your A game because its got that same firm but fair difficulty curve as its predecessors. Or, at least, for the most part.

Despite some sligtly bland textures on the Switch version, the game has an inventive and humourous visual flair akin to Little Big Planet, and developer Choice Provisions have also spruced up the formula with some nice dynamic camera movement, contributing to the fluidity of the gameplay.

With 27 levels in the main game, across 3 different themed worlds, the game has a decent amount of content to begin with, and yet each has a branching gold/gem path with varying difficulty. These intertwining paths of a level are intelligently designed, making you think differently about the challenge you just conquered and, in some cases, making the level seem completely different entirely. The introduction of vehicles into the mix helps to achieve this.

Runner3 has a bunch of different playable characters that you can unlock via in-level ‘quests’, and customise by the currency you collect. Not only does this add depth to the levels, but it’s a blast getting playing as some of the crossovers. The cast includes the voice of Mario Charles Martinet, the narrator himself (reprising his role), Shovel Knight, and even Eddie Riggs, Jack Black’s character from Double Fine game Brutal Legend. As the most recent Gorilaz music video has shown, Jack Black’s appearance can make anything better.

If there wasn’t enough to get cracking with, the level count is almost doubled with the addition of new ‘retro’ levels accessible by collective VHS tapes. These new levels have a completely different style of play, giving Commander Video free range of movement for the first time, and are a great palette cleanser analagous to the main experience.

As with the other runner games and those of the genre in general, Runner3 is predicated on trial and error, repetitive gameplay. It is only this style of rinse and repeat execution that gives such immense satisfaction and gratification when successfully finishing a level, but this comes at the cost of a high frustration. Often I felt like I perfectly made a jump, or pressed a button prompt perfectly, and yet I fell to my death, with the effectively violent HD rumble shaking me into a rageful stupor, only serving to make me more likely to fail again.

Adding to the frustration, certain obstacles such as the sword and shield-wielding robots and high walls aren’t designed ideally either. The robots basically decide one of two different moves they’re going to do right before you’re meant to react, and so it often feels cheap when they come into play.

Another minor gripe I have is the music. The game is certainly rhythmic, but the songs you’re running to I thought were forgettable and samey, which is a quite a shame considering how integral they are to the gameplay, and how inventive the visuals are and humour is. The music didn’t always feel exactly on beat, which was tricky to get used to at first.

Runner3’s four boss battles are cinematic and funny, but they’re really easy, which makes them feel inconsistent with the rest of the game. In Super Meat Boy, the bosses were some of the most difficult stages of all, and it felt like a fitting culmination of the world you had just conquered. Here they’re just laughable, which doesn’t make any sense. The final boss, a showdown with timblebot in a 3D racing stage, is terrible. Bad design on the boss’ hitbox means that you have to just guess out of thin air where to land when smashing down to defeat him, and it resulted in me having to repeat the stage over 50 times, doing the same exact thing until I lucked out and finally hit the invisible vulnerable spot. Nintendo games such as Mario and Zelda expose vulnerable spots on bosses by highlighting them specifically, and this could have been implemented here to avoid leaving a bad taste in the players mouth by leaving their last memory of the game a frustrating one.

Runner3 is a thoroughly enjoyable return to form for Commander Video and friends, both as an advancement of the long-running indie series and its debut on Switch. Some minor, frustrating setbacks hold it back from greatness, but the rhythmic platforming the series is known for is present and as dynamic as ever.