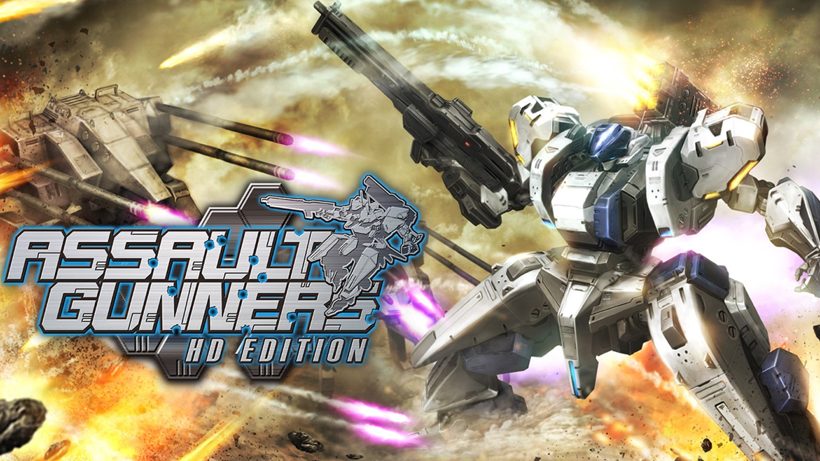 Assault Gunners HD Edition comes to the Nintendo Switch with the promise of putting you in the driving seat of a power battle mech that is tasked with keeping the peace. It’s a re-release of a videogame that is a couple of years old now, so just how well can it hold up?

The story follows the Peace Keeping Force, or DAT, as they explore the surface of Mars to find out what happened to the colonies that have been attacked by the now reprogrammed ANTS units. As players progress through the campaign the truth slowly becomes clearer as to who or what is threatening the terra-forming of Mars. Delivered mainly through walls of scrolling text between missions, it is interesting enough to keep you playing but is not the most ground-breaking of stories.

Gameplay is in the third-person view and for the most part works as intended. You move and aim with the thumb sticks, fire with the R or ZR triggers and dash with the L and ZL triggers. Besides switching weapons with the face buttons and issuing orders with the directional buttons, that is it for the controls.

It is worth noting that things like your turning speed and movement are not adjustable in the options menu and are linked to the parts installed on your mech. As you progress through the title, unlocking and improving parts, you’ll soon find you can build rather fast and responsive mechs that make the combat that bit more enjoyable the further you progress.

The dashing mechanic is an odd one though, as it is also linked to your shield. So, as you spend your shield to boost around the battlefield you will make yourself more open to attacks which can be a fatal move. The numerous pickups found across missions help you stay in the fight but don’t expect your AI team members to use any of them.

Sadly, the gameplay suffers from issues mainly found in difficulty which is all over the place, and the somewhat terrible AI. On top of that, the controls suffer from the odd bit of input lag which can cause you to mess up attacks when needed.

The game however does have superb performance throughout with no noticeable slowdown, and loading times are short. This makes up for the otherwise dull visuals, though they are a shame because the designs of units are rather interesting. Then again, the lower quality models do allow for a surprising number of enemies on screen but given the power of the Switch it would have been nice to see some visual improvements. As it stands, Assault Gunners HD Edition looks and feels super dated which is a disappointment. This is even before noting that horrible UI which takes up most of the screen and blocks much of the action.

In the end, Assault Gunners HD Edition is a mixed bag of a title. There is plenty of content to be found in the campaign and endless mode, but the poor design and dull visuals leave the title falling just short of the mark. With a bit of work this could have been a superb release, but for now, it’s mediocre.

Assault Gunners HD Edition just misses the mark on being a good title. What should be a title full of thrilling mech actions ends up being dead weight.