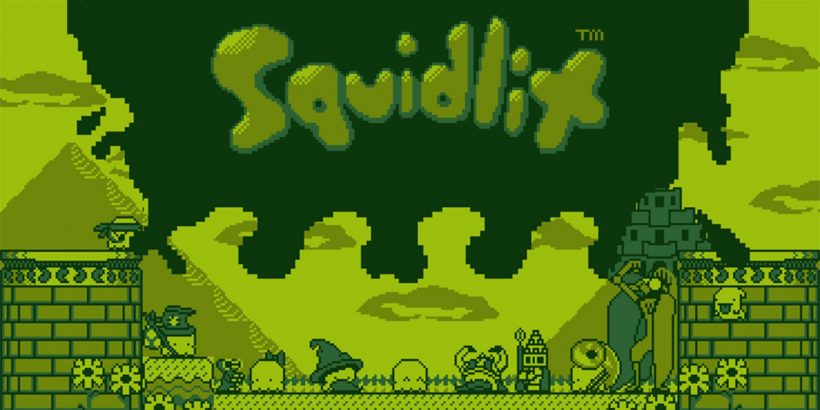 Many indie games nowadays replicate the aesthetics and themes we all came to love growing up, using 16-bit graphics and music to hit us with that comforting feeling of nostalgia. For the team at Squidlit Ink, however, they took this one step further, creating their game in a style as close to the original Game Boy as they could — limitations and all.

The developers did an excellent job of making Squidlit feel very similar to classic Nintendo titles. The relatively simple gameplay mechanics which see one button utilised to both jump and squirt your ink projectile are reminiscent of the simplicity the team at HAL strove for in their creation of the Kirby games. This causes problems for reviewers like me as to how I should judge Squidlit. Am I to review Squidlit in comparison to modern games, or to those from the Game Boy?

The resemblances don’t stop with the mechanics, as your character, NPCs, and enemies all have cutesy designs frequent in such games from Sakurai and HAL Laboratories. Had Squidlit been made in the 1990s, it would now be a Nintendo staple, and fans (myself included) would flock to their local stores to buy a plush of your squid, Plip.

The team at Squidlit Ink used Little Sound DJ, a programme loaded onto a Game Boy cartridge, to create the sounds, and only included four sound channels (the maximum available in Game Boy titles), ensuring it remained as true to the console as possible. It is no surprise then, that its wacky synth soundtrack complements the overall aesthetic perfectly and transports you back to the 90s, albeit this time with a backlight.

The storyline of Squidlit is more developed and in-depth than many Game Boy games, dropping hints and exposition within the dialogue. Ultimately though, Squidlit’s story is nothing new. It follows the standard tale of an evil ruler doing evil things (in this case, the God-Emperor Skwit Skwot) and you are tasked with reaching their castle to stop them. Plip’s humorous interactions with NPCs do improve the playthrough at least. Lots of this is, to put it simply, dumb humour. Whether it’s squids performing in a band, living in holes, or guarding the castle, Squidlit’s charming personality more than makes up for a somewhat generic narrative.

Squidlit does not feature the most difficult gameplay, as most levels are too simple to offer any challenge to players. Enemies can all be defeated in the same way — with one hit of ink from above — and given the abundance of muffins that serve as your health scattered around the level, a mistimed jump into an enemy doesn’t make much of an impact. It is only during one of the few boss fights and the final level that Squidlit’s gameplay becomes engaging, introducing new mechanics and obstacles players need to master to pass through. But then the game just ends. When Kirby’s Dream Land first graced the Game Boy, there was much less competition, but now in the 21st Century, players may be put off from investing too much into a game that lasts only an hour.

Overall, Squidlit is a quick, light-hearted experience that for £1.39, you can’t go wrong with. Modern games such as Coffee Crisis and Tanglewood have seen releases on the SEGA Genesis, and I would love to see Squidlit Ink follow suit by releasing a physical version of Squidlit for the Game Boy.

If you have an inkling for retro platformers, Squidlit is a must-have for the Switch. The overall aesthetic perfectly captures the essence of what made the Game Boy successful, although it is let down by the gameplay elements, which offer little challenge.