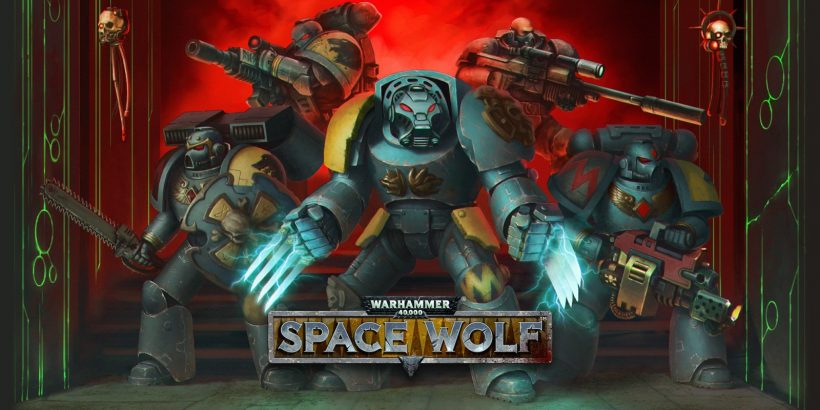 Tactical strategy games offer a more thoughtful and slow-paced look into a fight on the battlefield, converted onto our screens at home. With rising popularity from the XCOM series, as well as games like Fire Emblem: Three Houses and Valkyria Chronicles, these titles make you the commander — trying to outsmart and outmanoeuvre your foes. Warhammer 40,000: Space Wolf was originally released on mobile platforms 5-6 years ago in free-to-play fashion, making its way to PC and console in the following years. This turn-based, card combat title combines the movement and fighting style of XCOM with the collectable card component of titles like Slay the Spire to make for a unique experience that, unfortunately, doesn’t match up to any of its inspirators.

There is a traitor amongst us. Warhammer 40,000: Space Wolf follows the story of Valgard Twice-Slain, a Space Wolf squad leader who’s shot down by the opposing Chaos Space Marines. After this unfortunate crash landing, it is up to you to find the survivors and battle through hordes of enemies to escape, all while winning the day. Although the Warhammer franchise is steeped in lore, this entry offers only a surface-level peek into what can be found in these games. With a grunting cast of soldiers whose only motivation is to fight to the death for their cause, you will be presented with shallow, uninteresting warriors throughout. Even if combing through endless enemies is satisfying, it doesn’t always make for the best story.

After falling into this jungle landscape, you will find yourself thrown right into the deep end, as enemies come running at you instantly. After a light tutorial, it is time to get started, but hopefully you’ve played a game from this genre before, as Space Wolf won’t explain much. Even if you have played XCOM, which this title plays like nearly identically, the card component and “effort” system are described even less, meaning you are in for some trial and error. Even after playing for several hours, I found myself unsure of how to manipulate the effort points to gain myself a higher initiative ranking, which makes for a lot of waiting patiently for your turn.

Once you understand how the cards work, even if you don’t grasp it fully, you can stumble your way through mostly successfully. Cards can be spent to allow for movement, as well as using them for their actual fighting functions. Movement is completed in grid-based fashion, where unfortunately, cover mechanics have been omitted. Simply run into the attack range and hope you can deal more damage than the baddies can.

Each card displays a weapon, whether they be swords or guns (and some side abilities), with which you can deal damage to your foes. Things like hit percentages, damage, and some special abilities are pointed out on these cards, so based on the terrain and number of enemies, you can make some judgments as to which cards to use, and which to spend so you can move.  All in all, this makes for an interesting system that creates just enough space between it and XCOM, but without more teaching moments, you will probably find yourself playing it like XCOM anyways.

Even with Warhammer 40,000: Space Wolf looking and playing like an XCOM clone, the card mechanics offer an interesting change-up to that tried-and-true formula. Unfortunately, a lack of story, comprehensive tutorials, and light combat mechanics make this feels like the watered-down version.

Warhammer 40,000: Space Wolf offers decent strategy gameplay for those fans looking for something as similar to XCOM as possible. However, lacking tutorials, weak story, and watered-down mechanics make Space Wolf feel like XCOM-lite with cards.