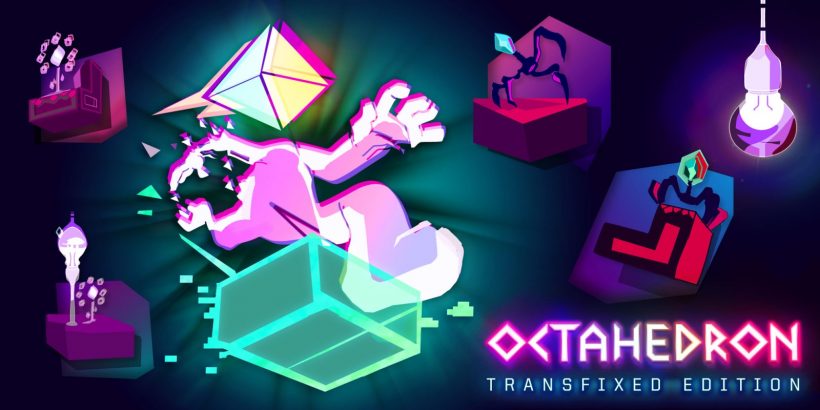 Touching a weird shape and being warped away to a dark, neon-light-flashing world isn’t quite what you generally expect when you venture out into the woods.

That, however, is the minimalist plot of Octahedron, the twenty-sixth title selected for physical preservation on Switch by Super Rare Games. Octahedron takes you through the disco-riffic world of Veetragoul. In this world, the enemies aren’t your biggest obstacle to progression – that would be gravity. Stages have you ascending a level, with your unique ability being the creation of platforms that you can conjure in mid-air after a jump. Holding down the L or R button allows you to move the platform for a brief period before its energy runs out, giving a feeling almost like Aladdin on his magic carpet, and that’s where the challenge comes in, as you have to selectively decide your platform’s course before leaping to avoid running the risk of plummeting down to the foot of the stage.

There are features which appear repeatedly in the game’s fifty levels, including lightbulbs which can be smashed through when sailing a platform through the air where flowers are generated somewhere above them, which are to be collected if you want to max out your score for the level. Each level also has a series of coloured triangles, usually found in tough-to-reach spots, which you must keep your eyes peeled for. They’re not just for collecting’s sake, fortunately – getting a certain amount of them will unlock bonuses later in the game.

In fact, this is quite a standout game for new platforming ideas. Certain platforms need to be walked past either left or right in order for them to solidify, then as you walk upon them in the opposite direction they discharge their energy and ultimately disappear, making for an added sense of pressure which can force players into making the wrong moves. It also affects the order in which you approach a level – you might have to go around the outside of a vertical series of platforms in order to bring them into being, and then make a circle round to where you started so you can ascend the new platforms while being careful not to move so far to the side that the platforms disappear and force you to repeat the entire process again. Later on, platforms will appear when you conjure your own and disappear when you lose yours, and enemies will start shooting rather than simply jumping on the spot.

The game’s soundtrack, a chiptune effort from Chipzel, Andre Sobota, Derek Howell, and Monomirror isn’t this writer’s cup of tea, but the general consensus elsewhere appears to have been that it’s a particularly standout example of the genre. As I prove, however, this is a title that won’t be universally adored, and you’re talking about the gamer-est of gamers who will find themselves the most at home. The visuals are, on the whole, dark with neon lights pulsing all over the place to give the place frequent douses of colour, but you’ll be honing in on the gameplay as the main focus, so it’s fortunate that ascending levels is an addictive experience.

Switch Players have been treated to the game’s Transfixed Edition, which means the inclusion of extra time trials, challenges, and post-game unlockables. It’s the best version of the game, and you’d be well-served to seek out the Super Rare Games physical copy before they end up like gold dust.

Octahedron is a difficult platformer which will entertain an audience due to its acclaimed soundtrack and inventive gameplay. Its visual presentation will make it difficult to get into for many, but there’s a solid platform challenge at hand here.