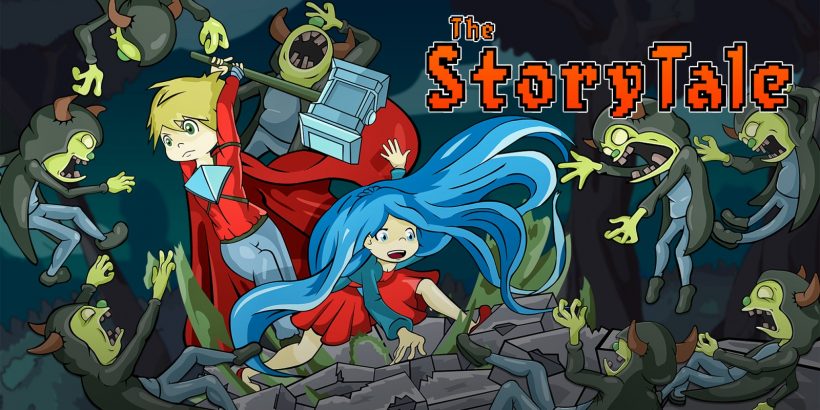 I am a big, big fan of platformers and retro styling, so a game like The StoryTale should be cause for personal celebration at least. Unfortunately, this might just be one pixelated plaything too many.

The StoryTale promises so much from first impressions; it certainly looks the part, reminiscent of both Celeste and Fez. The fairytale world is populated with humorous goblin characters which are animated delightfully. It’s also full of seemingly interesting gameplay features: alternating between two playable characters, mechanics unique to specific levels, enemies that push you back rather than causing real damage. On the surface, it seems like an original experience.

Each level has a target portal to reach, typically at the far right of the level, and checkpoints are scattered along the route. The catch is that the portal needs to be unlocked with a specific key, and that key is often locked inside a chest which requires a different key, etc.

Special moves, styled here as ‘spells,’ cause changes in mechanics. They vary from level to level, and it’s this aspect that is one of The StoryTale’s selling points and saving graces. In some levels, the action grinds to a halt whenever the player stays still, which makes for some interesting tactics. Other levels utilise floating, a super-sized main character, and a heavy hammer which must be swung since it’s too heavy to jump with. The idea is solid, but it feels a bit disjointed; there’s nothing to really explain why different levels behave in certain ways, and everything happens in isolation without any lasting progression or a meaningful upgrade path. It’s almost as if the developer wanted to show off every mechanic they could imagine and threw them all in without considering the overall package.

Possibly not since Mario 64 has a game been so hampered by its camera. And bear in mind that this is a 2D game, which should be far less susceptible to such a problem. The StoryTale’s camera is like a supermarket trolley with a life of its own. If you suffer from seasickness or vertigo, this could be a painful experience. On occasions, the camera just will not scroll as required, so important elements — e.g. enemies! — are completely unsighted. On levels where you’re free-falling, it’s particularly awkward.

Although the camera system is the factor which comes closest to making the game unplayable, there are other sources of frustration. Some backgrounds are so dark that enemies are nigh-on invisible. The goblins, despite looking fantastic, aren’t always clearly distinguished between those that are hostile and those that will obstruct or harm you. And, generally, the level design is uninteresting, although things get better toward the end of the game as levels get larger.

It also becomes apparent that the ‘endless death’ mechanic, which initially feels so welcome and forgiving, can’t make up for these other annoyances. It’s all well and good having unlimited continues, but it can only postpone the frustration caused by having to repeatedly tackle the same section, especially when deaths are often ‘unfair.’

It feels like there might be a reasonable game here if the camera were fixed along with some of the graphical problems, and more attention was paid to level design. But there’s not enough in this game’s DNA to really convince me that it would be worth the effort, and potential players should probably avoid disappointment by passing on The StoryTale altogether.

The StoryTale has a few significant flaws that mar what little entertainment it provides. A sprinkling of originality is not enough to elevate this title to a position from which it can stand out in a crowded genre.