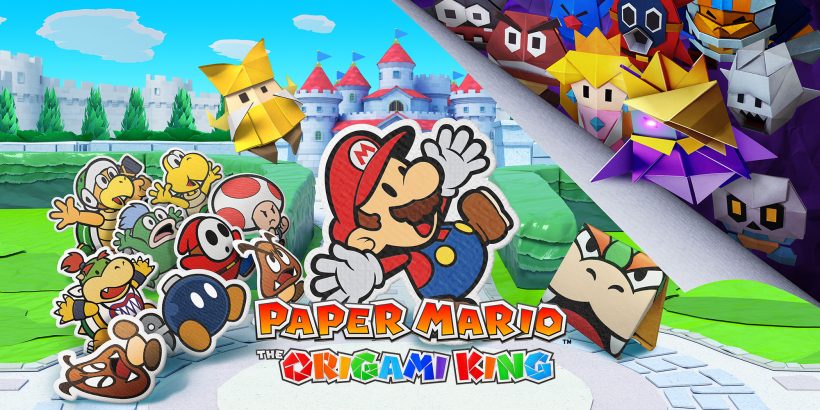 The franchise started as a story-focused RPG, then became a platformer, then a sticker-based RPG, and recently existed somewhere in-between with middling results. When Paper Mario: The Origami King was announced, the latest entry looked to have so many of the things we missed from earlier releases that fans were cautiously optimistic. So, is it as much paper fun as a Piñata? Or is it finally time this franchise folded?

Peach has been kidnapped by The Origami King, who plans to turn the world into origami, creating Folded Soldiers to help him meet this goal. Of course, it’s up to Mario to stop him, free the castle from his streamers and save Princess Peach. From the outset it’s clear how much care has been poured into every inch of this game, as thanks to King Olly’s attack on Toad Town, there are hundreds of Toads to discover, each folded and hidden in myriad different places and as an array of ridiculous animals and objects. They’re a joy to find, and also help in battles so there’s a reason to find them as well.

New to this entry is the 1000 Fold Arms technique, a superfluous addition with fiddly motion controls (which I quickly turned off) to help you find hidden items. Luckily there’s also Vellumental Powers, giving your Origami companion Olivia some cool transformations, each helping you to unlock new areas and offering some of the best visuals you’ll see all game. Yet another addition is the confetti mechanic, which you’ll throw to fill out missing parts of the world and discover hidden secrets, both encouraging and rewarding exploration.

You’ll find fun characters populating this world, with some fantastic writing bringing everyone to life. Highlights are the lovable companions such as Bobby (The Bob-omb), Prof. Toad and Bowser’s own Kamek, each accompanying you for certain sections of the adventure. The localisation is incredible and stretches beyond humour, with some unexpected emotional scenes written so well I shed a tear. I just wish the personality seeped into visual design, as there’s bland conformity to the NPCs carried over from Paper Mario: Colour Splash, so I’m disappointed to see more sadly forgettable characters.

But clearly unforgettable is the sense of adventure, as Origami King is a huge game with many epic moments sprinkled throughout. It often reminded me of a Zelda title with puzzle-laden dungeons, a sea section especially reminiscent of Wind Waker and the Toads offering the same satisfaction as Koroks did in Breath Of The Wild. It certainly shares the same attention to detail and commitment to making exploration rewarding. Never was this more apparent than with the coffee houses. These hidden rooms are an optional discovery, but offered a moment of reprieve and some memorable writing, for no other reason than because they’re a great addition – which is why it was so jarring to have the game itself stall any sense of adventure so painfully often.

Counter to the energy of exploration is Origami King’s battle system. Each fight opens up on a field of movable rings with enemies scattered around. You must arrange enemies in either a straight line to be jumped on or a square to be hit with a hammer, while a successful lineup gives you an extra 50% boost to your attack power, making it an almost instant win when done properly. While a fun initial novelty, the ring puzzles quickly become nothing but a distracting barrier to the actual battle afterwards, and once you have solved the ring puzzle, the attack boost makes most encounters a breeze. It strips the fights of strategy, and I didn’t feel any sense of reward from battles, just frustration at how long I hadn’t been enjoying myself.

The game also doesn’t offer EXP points, but instead offers coins and confetti when you beat enemies, both of which are abundant as you explore anyway. Given the lack of strategy needed, the lack of impetus to battle and the several convoluted steps it takes to beat even easy enemies, I found most encounters a mind-numbing exercise in pushing buttons or avoided them at all costs. Coins can be used to buy breakable items that offer stronger attacks, but this is simply a monotonous process that could have been solved with EXP. Luckily boss battles flip the script with Mario navigating his way through the ring system to beat the enemy in the middle, demanding enough thought and strategy that it made these encounters engaging. The especially silly stationary enemies offered such a change of pace that I always looked forward to the next.

Equally, the giant papier-mâché baddies, the Paper Macho, are beaten in the overworld instead of the ring battles and here the brisk action helps to keep the rhythm of the game, with the Paper Macho boss fight on a boat being one of my favourite moments. Considering I found this game a little too long, taking me over 50 hours to complete, I feel it didn’t need the padding of such a convoluted, dull battle system. Luckily there are enough mad set pieces and different action elements to keep you entertained, including a Who Wants To Be A Millionaire? homage that had me in stitches and the excellent endgame airship battle.

So, when it works, Paper Mario: The Origami King is a confident and rewarding adventure game with a world overflowing with great characters and fun secrets. But a convoluted battle system halts the fun, begging the question of why it was even included. This paper adventure is far from ‘tearable’, however, with inspiring writing and a great story helping to paper over the cracks. I just hope the next game can make up its mind, as this one feels like it was pulled in too many different directions.

With a rich world to explore, secrets to find and fantastic writing at every step, Paper Mario: The Origami King often feels like Nintendo at its very best. But a baffling battle system and forgettable characters get in the way, holding back what could have been a sincerely exceptional adventure.