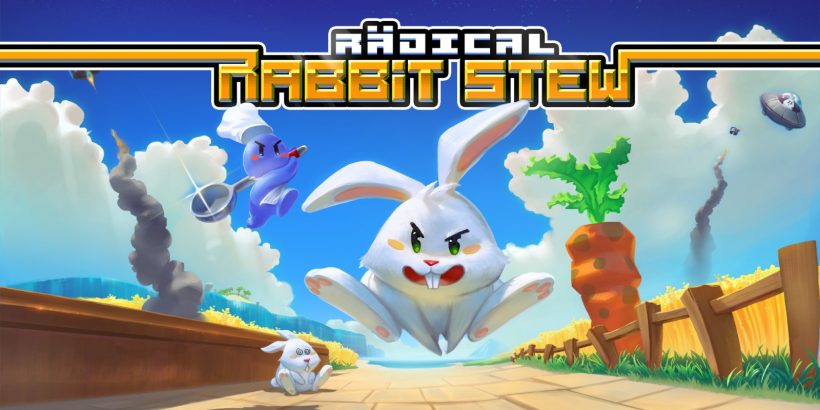 There is something strangely therapeutic about whacking rabbits into stewing pots with a big spoon. But the colony of long-eared animals featured in Radical Rabbit Stew aren’t here to satiate your culinary urges; this is a dangerous rescue mission.

Under the instruction of the Queen Rabbit, the rabbits have abducted every chef from the Legendary Space Diner. She has grown restless of eating plain vegetables, and the chefs are being kept against their will to keep the Queen Rabbit fed with more exotic dishes. Only you – the cleaning boy – managed to evade capture, and it’s your task to rescue your colleagues.

Viewed from a perspective reminiscent of Bomberman, your character is initially armed with just a wooden spoon, and must clear each level by whacking rabbits in the correct direction to propel them into bubbling cooking pots.

There are bounce pads on the walls that can change the direction of the dazed mammals, but initially, the game seems almost too simplistic in what it requires of you. However, like any good puzzle game, features are gradually introduced to offer new logic challenges. Radical Rabbit Stew has a quirky appeal to it; even character upgrades are bestowed with charm. When your wooden spoon is upgraded to a silver version, the game informs you that it has been “forged with organic rabbit tears”. A subsequent upgrade provides an extending grapple arm to grab those out-of-reach bunnies.

Additional life hearts can also be earned as the game progresses. These are certainly needed, as a rabbit that hops too close and manages to avoid the swing of your spoon will deduct a heart. Lose them all, and the level resets. Other potential dangers include sheer drops, bombs, and huge blocks that stomp the ground (in another galaxy, we might call them “Thwomps”). For completionists, there are blue coins to collect on each level, and these are often found in spots that require a little more thought to reach.

In single-player mode, Radical Rabbit Stew is an arcade puzzler with a varied selection of levels to dine on (including a side order of boss battles). But there is more: a competitive multiplayer mode and an intuitive level designer for you to create your own challenges.

In multiplayer, the puzzle elements of the game are shunned in favour of pure arcade action. Up to four competing chefs try and whack as many rabbits as possible into a huge stewing pot in the centre of the screen as a timer counts down. It’s a fun distraction with some genuine laugh-out-loud moments (with a well-timed swing of the spoon, the chefs can bash an opponent into the pot) but it’s a shame some of the upgrades that appear in the single-player campaign aren’t also included in the multiplayer game.

The level designer allows you to place objects using option wheels like those seen in Super Mario Maker. If you have the time and patience, it is a generous addition to the package.

Radical Rabbit Stew has a graphical flair that champions the SNES-era. The presentation is top-notch: catchy tunes, authentic sound effects, a polished menu system, and sprites that ooze character (these rabbits are too good to cook). There is a definite taste of 16-bit nostalgia, with gameplay that gradually builds in complexity. With a choice of two difficulty levels, and the temptation of the blue coins for a perfect score, Radical Rabbit Stew is a game that offers doses of arcade puzzle fun in perfectly edible portions.

Radical Rabbit Stew borrows ingredients from a few other video games to boil up a 16-bit nostalgia hit, featuring a solid (if not overly long) arcade puzzle single-player campaign, a chaotic multiplayer offering, and a level editor. Delicious.