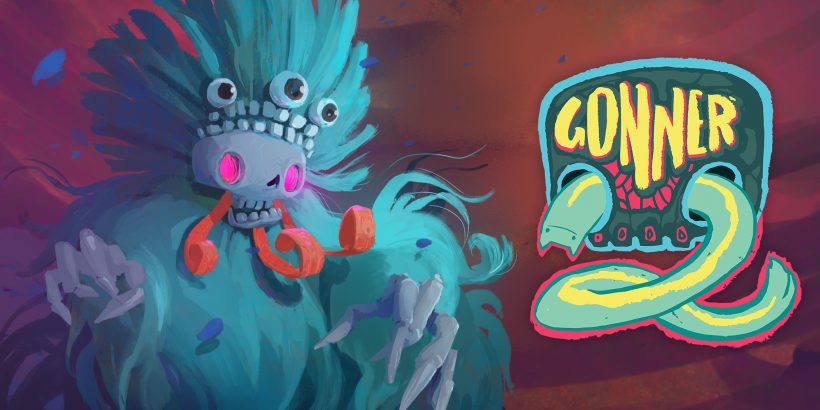 GONNER 2 is the sequel to Raw Fury’s popular roguelike, GoNNER, that drove gamers wild back in 2016. Intense, fast paced and utterly bonkers. If you found the first game a tough nut to crack, you are going be pushed to the extremes of your gaming capabilities this time around!

As in the original GoNNER, you take control of Ikk, a little blue blob with no limbs, who this time has been engaged by Death herself to return her lair to some form of normality from the lure of an evil spirit. You only know that this is the concept of the game if you actually read the game’s blurb though.

Starting in Death’s lair, you collect your basic supplies: a skull that does little but add a head to your body, a rifle and a backpack. You then jump into the mouth of what is either a snake or a very odd looking monster. Personally I felt it looked like the kind of sock puppet you used to make at school. Once in the mouth you press ‘B’ and then ‘B’ again, and out you pop at the other end. Not a great image I grant you, but once you have emerged from the bowels you’re into the first area. The first thing you notice are the vibrant colours. Pinks, purples, oranges all blossoming against a black backdrop. This is the time to dig out your sunglasses!

Controlling Ikk is as simple as it gets. Jump, dash attack and fire. That’s it and it’s a good thing, as with so much about to happen in front of your very eyes, the last thing you need is to worry about what buttons to press! Enemies range from floating one eyed orange blobs, zombies, skulls and even fish. You can attack enemies with the dash move using the ‘A’ button but the rifle, fired by pressing ‘Y’, is your best way to defeat the foes in your path.

The levels are all procedurally generated, as in the first game, so trying to learn patterns isn’t going to cut much mustard here. Everything is very manic and when you jump straight in you’ll want to blast away as quickly as possible. As satisfying as this can feel at first, it won’t take you too long to realise that it’s not the way to succeed. Patience is key and having a Baldrick-style ‘cunning plan’ is worth its weight in gold.

You can get through each level without defeating every enemy but good luck trying because they don’t leave you alone. They are determined to engage you in battle. Defeated enemies drop coins so make sure you collect them as they will come in handy soon enough.

As with any platform game, you will come up against bosses. Big, bad and slightly insane bosses. One example is a huge angry octopus who will toss you around, chew you up and spit you back out. Those aforementioned coins can be used in a shop that precedes each boss fight where you can collect more hearts and ammo to give you the best chance of victory. Defeating the bosses is as tough as it gets but when you’re victorious you’ll feel enormous relief and satisfaction in equal measure.

Having a tough challenge in a game is all well and good but here it can become too much at times. Tackling bosses is a real war of attrition but when you die and respawn, an issue arises that had me screaming blue murder! I would respawn and the boss would be right in the place where I had reappeared. This leads to almost certain and immediate death. It feels unfair and although it doesn’t happen every time, it’s an issue that does temper the fun on offer. I can feel my rage just writing about it.

Whilst the graphics are vibrant, fun, and garish, and everything runs smoothly, the game is sometimes too busy for its own good. When you’re firing your rifle and there are numerous enemies on screen, it’s easy to lose where you are. Despite the new firing mechanic being welcome — in the first game you were restricted to only shooting left and right — it is still flawed. You never quite feel in control of where you are aiming and it becomes more a case of hoping for the best.

The music is great and fits the play well. When in Death’s lair it is morose but once you are up against the game’s many foes, it’s a funky beat that will have you humming as you go.

The new co-op local multiplayer is a real plus in GONNER 2. Taking on the game with a friend or three is really engaging and, when you get your tactics together, you can blast through it a tad easier than in the solo player mode. One of you can distract an enemy whilst the other lies in wait to take them down. An online multiplayer would have been welcome but has sadly been omitted — online leaderboards and challenges would have added so much more replayability value. The local multiplayer adds enough to make you come back for more, but true online could have taken this game to another level.

GONNER 2 is not a game for the faint-hearted. If you like your challenge as tough as old boots this is a game you’ll want to take on. Those that enjoyed the first game will also find plenty to enjoy here. The niggles add to the high difficulty, though, and those wanting a relaxing experience will need to look elsewhere.

GONNER 2 is a fast paced and brutal roguelike with plenty of madness thrown in for good measure. Local co-op will have you coming back for more but little niggles and an over the top difficulty mean this game falls just short of greatness.