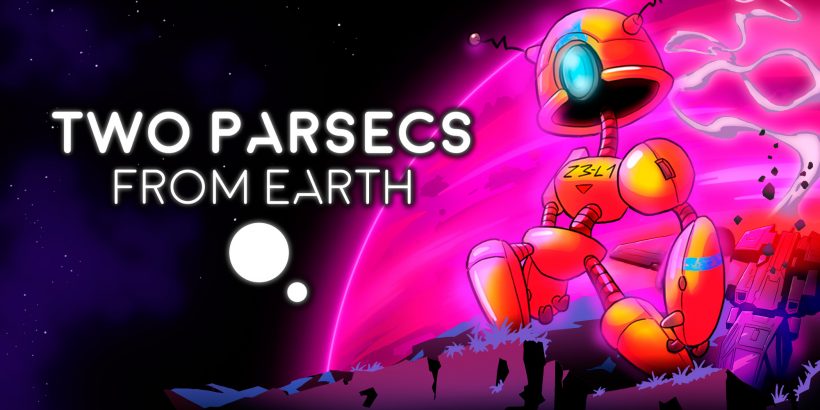 Rarely have I encountered a game with quite as many frustrating, ill-judged elements as Two Parsecs From Earth. There’s nothing wrong with challenging platformers — I adore Celeste, for example — but when difficulty is the result of poor design and poorer implementation, it’s hard not to feel cheated.

Hands up who likes blind jumps? No, I thought not. Two Parsecs is packed full of pits containing unseen spikes and jumps where an enemy might be occupying your landing space, depending on timing that you just have to second-guess. It’s a shame, because the central idea has a small amount of merit.

Two Parsecs is a mini-Metroidvania, following hot on the heels of another Ratalaika release, Prehistoric Dude. It’s not exactly a winning streak, I’m afraid. The setup here is pretty pedestrian; something which the game references itself in an attempt at self-deprecating humour. Unfortunately, that humour falls flat and comes across more annoying than charming. You play a robot tasked with retrieving batteries and cargo to deck out a crashed spaceship for the return journey to Earth. Queue a lot of exploration and platforming around a fairly claustrophobic and visually monotonous planet.

That aforementioned central idea? Well, there are classic ability upgrades to be gained such as double-jump and dash, but they come in pairs, and when you encounter them, you have to decide which to adopt and which to go without for the entirety of the run. If it sounds like damning with faint praise to say that this innovation is pretty much the high point of the game well, that’s because it is — the praise is not going to get any greater than that.

If you’re going to build a pixel-precision platformer, it’s important to get the controls tight and responsive. In this game, there’s either an input delay or some other issue which results in far too many missed moves. Double-jump in particular seems really inconsistent. And there’s something about the gravity of the main jump that makes timing a successful dash painful in the extreme. Mercifully, there’s infinite lives, but if you die in a room, you’ll lose any cargo you collected since entering it; that just encourages backtracking to leave a room and save the collectibles, though, which isn’t exactly a fun way to spend your time.

There’s a smidgen of variety with the introduction of three chase scenes, during which all abilities other than your basic jump are removed. The first one is simple and nothing to write home about and the second more of a reasonable challenge, but the third is just a rage-inducing gauntlet which requires such perfect timing that it descends into boring repetition long before completion.

The ill-advised attempts at self-referential humour might not grate so much in a better game, but in Two Parsecs they just leave a sour taste. At one point, there’s a sarcastic message about an in-game zoom function. It would be less offensive if a) there was actually a point to zooming in (there isn’t) and b) there was a zoom control for the map (which there also isn’t, even though it’s sorely needed!). On top of that, the default view crops out so much of what you really need to see in the name of ‘false difficulty’ that zooming in is the last thing you need.

Once you’ve finished, you get to do it all over again with the abilities you passed up before, so you can grab previously unobtainable cargo. I strapped in for more punishment. The game crashed. A fitting end to an excruciating experience.

This robotic Metroidvania-by-numbers is sloppily assembled, lazily designed, and controls like the rust’s setting in. Dedicated speedrunners may find a modicum of challenge here, but I found Two Parsecs From Earth a frustrating experience from start to finish.