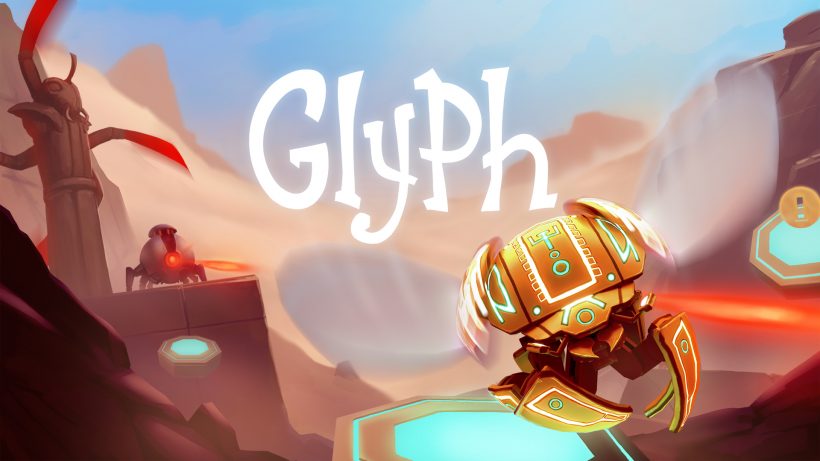 If you’re as old as me, you likely remember a PS One game called Kula World. In it you guided a sentient beach ball through a series of increasingly abstract environments, collecting keys while seeking the way out. Glyph is another ball-rolling game that sent me down similar thought paths – especially in the key-collecting department – only this time it’s all connected using a vaguely Egyptian setting. The result is a modern 3D platformer where you have more freedom of movement, sure, but it still ultimately suffers from uneven gameplay design and imprecise controls.

Before entering its main hub world, Glyph starts you off within a broad tutorial section. Because, although the titular Glyph spends most of their time bouncing and rolling around as a ball, it turns out being an ancient Egyptian bug creature has plenty of extra perks, handy for traversal, too. These range from a simple double jump to slamming downwards when wanting to gain extra height; you can even temporarily hover across gaps when in bug form. All these different abilities gives Glyph the means to potentially overtake its more polished platforming peers, yet the aesthetic wrapper holding it all together feels bland.

Aside from the minimalist level layouts, the biggest proof of this is Glyph’s attempt at weaving a story. The overall cartoonish vibe is fine, I’ll admit, yet there are no cutscenes, no voiceover and no real characters. Normally this’d be okay for a game that places gameplay first and foremost, but Glyph consistently tries to give meaning to your actions through a story it never fully commits to. Expositional text littered throughout talks about you being awoken to “cleanse the corrupted heart of creation” and your mission to save the temple or whatever. The execution here is poor, and I would have much preferred no story at all. It’s very odd and merely serves as a distraction.

Glyph is instead at its limited best when playing levels, which more often than not task you with collecting coins, artefacts and gems needed to progress. Doing so forces you to think tactically about how to get from one platform to the other using your unique movement abilities. And while working this out is fun for a little while, it quickly comes apart when you realise the game demands an incredibly precise level of control that the Switch’s analogue sticks don’t allow for. Several times when trying to land a jump or roll up a wall, I would slip off, forcing me back to the very beginning.

Luckily, the collectable-driven Exploration levels and Time Trial challenges aren’t too big, so the lack of checkpoints isn’t irksome. But it isn’t great when failing and then having to start over again feels like something out of your control. It all adds up to this sense that Glyph looks and feels like a ball physics game a la Kula World or even last year’s Skully, but actually wants to be thought of as a more traditional 3D platformer similar to Mario. Mushing these two gameplay design concepts together is a cool idea, but it’s one that Glyph never really pays off.

All that being said Glyph isn’t a broken game, just a largely unfulfilling one. Players craving the simple satisfaction of working out the best way to get around creatively, while hoovering various different collectibles, should have fun. But for me it was all hampered by a repetitive gameplay loop, an odd attempt at narrative, and some seriously unreliable controls. It’s a shame because Glyph’s suite of flexible traversal skills have the makings of a fun indie platformer.

Glyph styles itself as one type of genre but desperately wants to be thought of as another. This jamboree of various platforming ideas never quite works, even if some players might find joy in its tranquil collectible hunting.