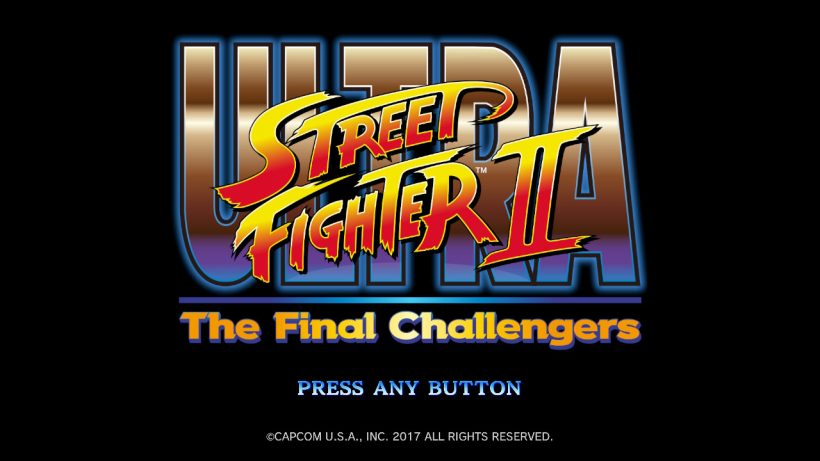 It’s probably a testament to how good Street Fighter II was back in the day that it’s still somewhat relevant today. It was long considered to be the benchmark of what a good fighter was, the game that every console manufacturer wanted on their system, and the scourge of many a week’s pocket money down the arcades. When arcades were still a big thing, that is.

There have been more revisions, releases, special editions, and re-masters of this one game than I care to remember, and yet Capcom have seen fit to house this on yet another platform. They’re not bringing Street Fighter V, or Marvel vs Capcom Infinite – just another version of a game that is over 25 years old, but with the promise of a new mode and two new characters. Is this the definitive version of a timeless classic, or simply an example of pushing your luck too far? Let’s dig in further.

If you haven’t picked up on it thus far, Ultra Street Fighter II: The Final Challengers is the latest and supposedly definitive version of arguably THE standard for a one-on-one fighter. The traditional arcade mode featured in the game will have you pick a character from an enhanced roster of nineteen, and then do battle against the other challengers on your quest to be the “World Warrior.” This occurs across eight standard fights, before the four boss characters come into play.

With a variety of punch and kick options – Weak, Medium and, Strong for both – you’ll need to defeat your opponent in a best of three match-up. Using the directional inputs in addition to the attacking buttons, you’ll even be able to execute one of many different special moves. Flaming punches, kicks, fireballs, spinning kicks, teleporting, or spinning lariats are at your beck and call however, so if you want to demolish your foe in style you’ll probably find a character to suit you. 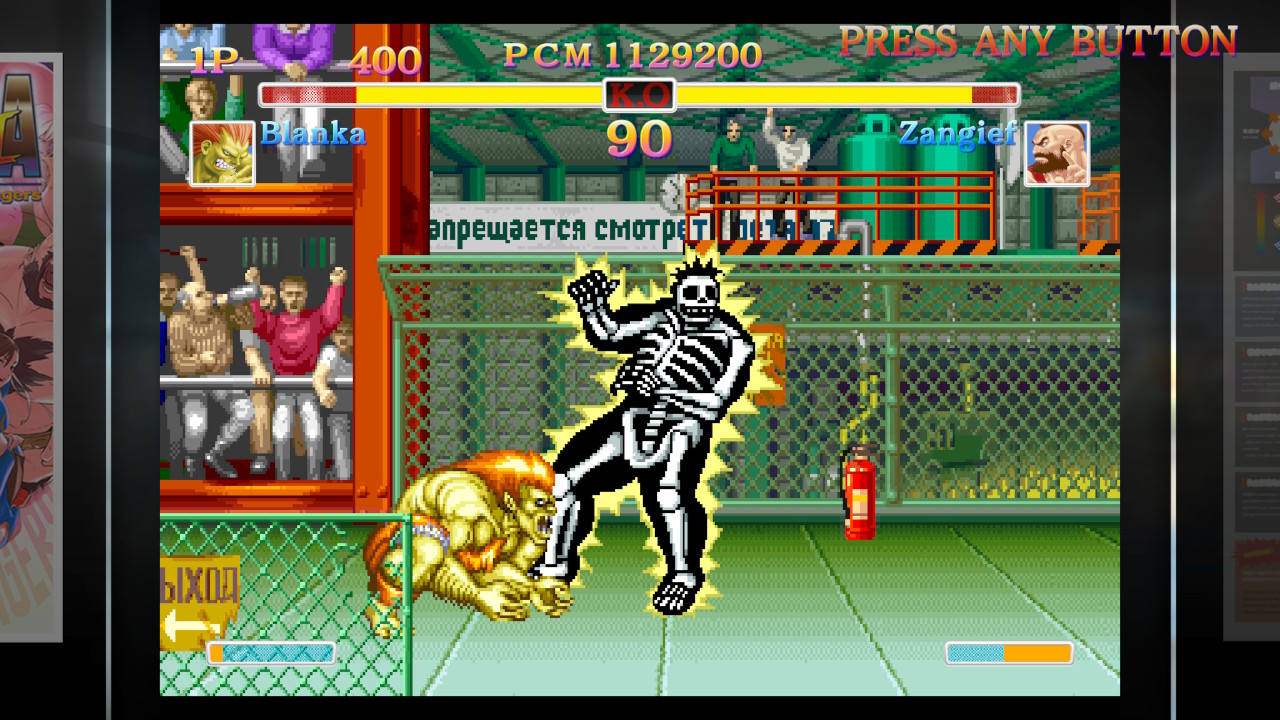 In-battle, striking your opponent repeatedly will build a combo together and you will also charge your “super” meter, which when full, will allow you to access an additional special move, usually to devastating effect. New to this version are “grapple breaks” which can interrupt combos.

As well as the classic line-up, the bosses and the “newer” characters from Super Street Fighter II, The Final Challengers sees the Street Fighter II debut of Evil Ryu and Violent Ken. These characters come with a little back-story of revenge and mind-control, but essentially are just re-skins of the two standard variants – though it seems that Violent Ken could be a little over-powered. The legendary Akuma is also present, rounding off that roster.

Arcade isn’t the only way to play, there is also another mode called “buddy battle.” It’s a scenario which allows you and another player (AI or human) to face off against Evil Ryu, Violent Ken, M. Bison, and Akuma in turn. Then that’s it. A blank “Game Over” screen and a return to the title later (about 10 minutes later depending on your skill level) you will likely feel a little underwhelmed as the mode would have been quite interesting had there been more to it. I did notice a bit of slow-down when playing though, it very much seemed like it wasn’t properly optimised for the additional character and also seemed that it only registered one player attacking at a time, which somewhat missed the point, I felt. 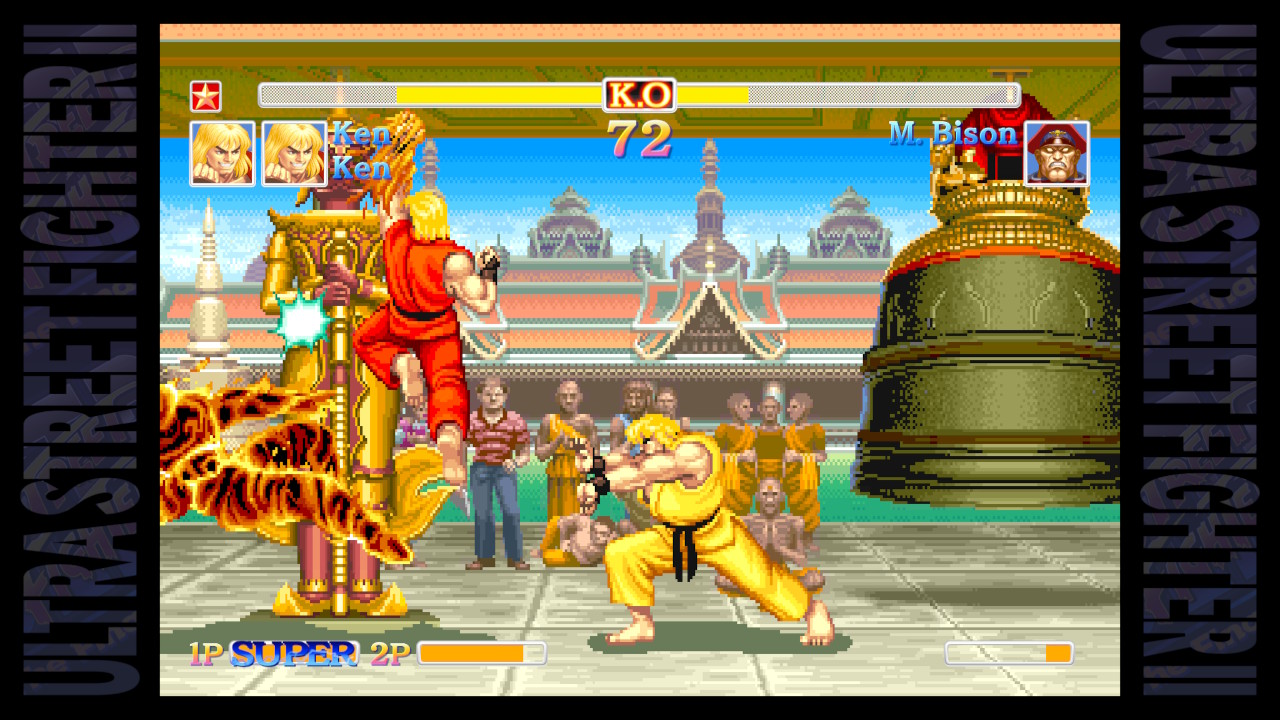 The game’s presentation is top-notch, and you’ll have a choice when playing through the standard modes of using either the original sprites or the enhanced, hand-drawn efforts from the more recent re-master. As nostalgic and welcome as the original graphics are, the newer visuals are superb and look a treat on that Switch’s screen. The audio has received a boost since the original days and can also be switched, although neither can be switched at will. You’ll have to go into the settings from the main menu and then you are stuck with it for the duration.

At this point, I must mention that I was slightly disappointed with the backgrounds for the stages. Back in the 1990s you can understand why there was limited animation from behind the scenes, but in 2017 (and indeed in 2008 when the version this is based off was released) you’d expect better animations from the watching crowd then jerking fist-bumps and stroking chickens. If this was a budget or indie title you’d be more forgiving, but this is Capcom and the game is released at a premium.

For that premium you’ll also get a new way to play called “Way of the Hado,” a first person mode which sees you as Ryu facing off waves of enemies by using the motion controls of the Nintendo Switch. Holding a Joy-Con in each hand you’ll be executing the moves yourself by punching and fire-balling and so on. That’s the theory anyway, but in practice this new mode really doesn’t work too well. I spent most of my time randomly sending random fireballs when I was trying to dragon punch. The whole thing is a complete mess, when it could have been something very unique and special – especially factoring in the skills you can upgrade, and the potentially endless battle mode. If a fighter with motion controls is what you want, you might be better off going for something else. 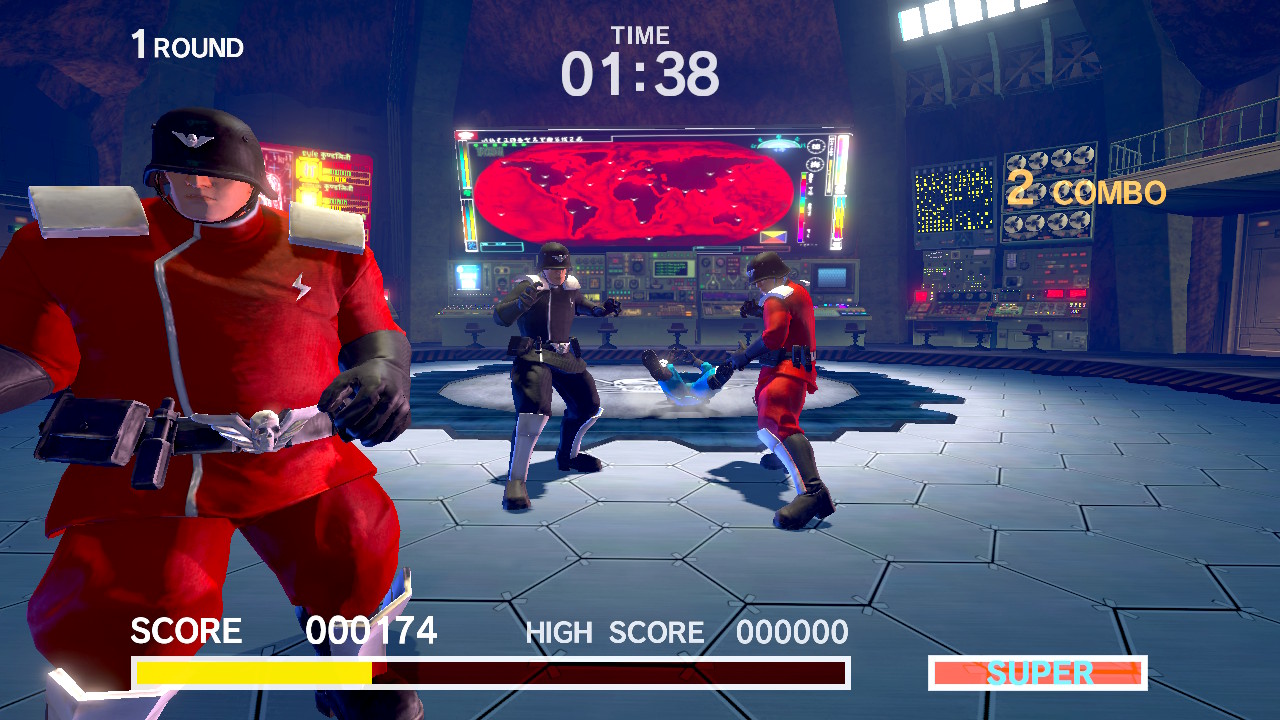 Rounding off the modes you’ll find an online component where you can face off against another player. I’ve spent most of launch day playing a few match-ups and it all seems to run reasonably well; most of the fights were fluid, lag-free, and completely enjoyable.

Coming back to the controls, it’s notable that they’re easy to pick up, but difficult to master – and it certainly doesn’t help that the best way to play the game isn’t available as standard. You can play with a Joy-Con each in multiplayer, but the most effective way is with a traditional D-pad (which is only offered officially on the Pro Controller). That’s essentially another £65 on top of your initial purchase of the game in order to play it “properly.”

There is a cheaper way, although this reviewer has not experienced it first hand. 8Bitdo offer a range of controllers stylised as retro Nintendo console controllers, and I’m told that these are very good. It’s something to consider if you were looking to pick a controller up specifically for things like this (or even the NEO GEO classics), but it’s still more money on top of that initial bloated price. 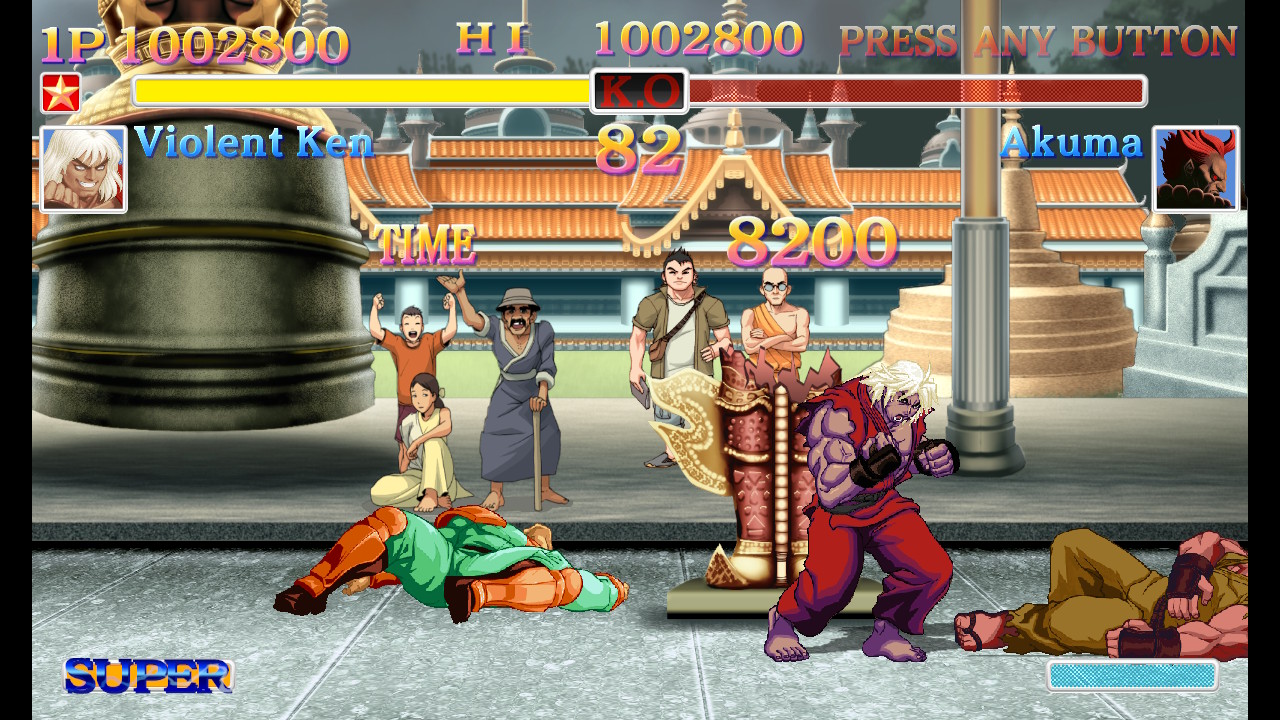 Kyle repeatedly tells me that I shouldn’t focus too much on pricing when reviewing, as it’s subjective and not relative to everyone. While I do recognise his point for the most part, in this case I think it’s entirely relevant. Although not a true port of Super Street Fighter II Turbo HD Remix from nine years ago, it does share a lot with that release – all except the price. This is a game that is being released at a premium, for over THREE times the asking price of that 2008 title. Sure, you get a fancy plastic cartridge, a case (if you go physical), a couple of new modes, two recycled characters, and a huge art section which is impressive – but the trouble is that even with these additions it’s hard to justify that cost. If this game released for half the price, or didn’t have a physical release to bump up that entry fee, you’d probably be far more accepting of the price.

That price is easily the biggest caveat here. It may be basically the same version of a game that first released 25 years ago, and the additional modes packaged in are a bit pants, but the core arcade mode and playing with others can be undeniably fun. I hadn’t played Street Fighter II for many years, but soon I was right back to being fourteen again; sitting at my SNES, throwing fireballs all over the screen. I hadn’t forgotten the moves, and it still felt just as fresh. Back then I was fleeced for my cash though, and I am loathe to recommend anyone to do the same again. 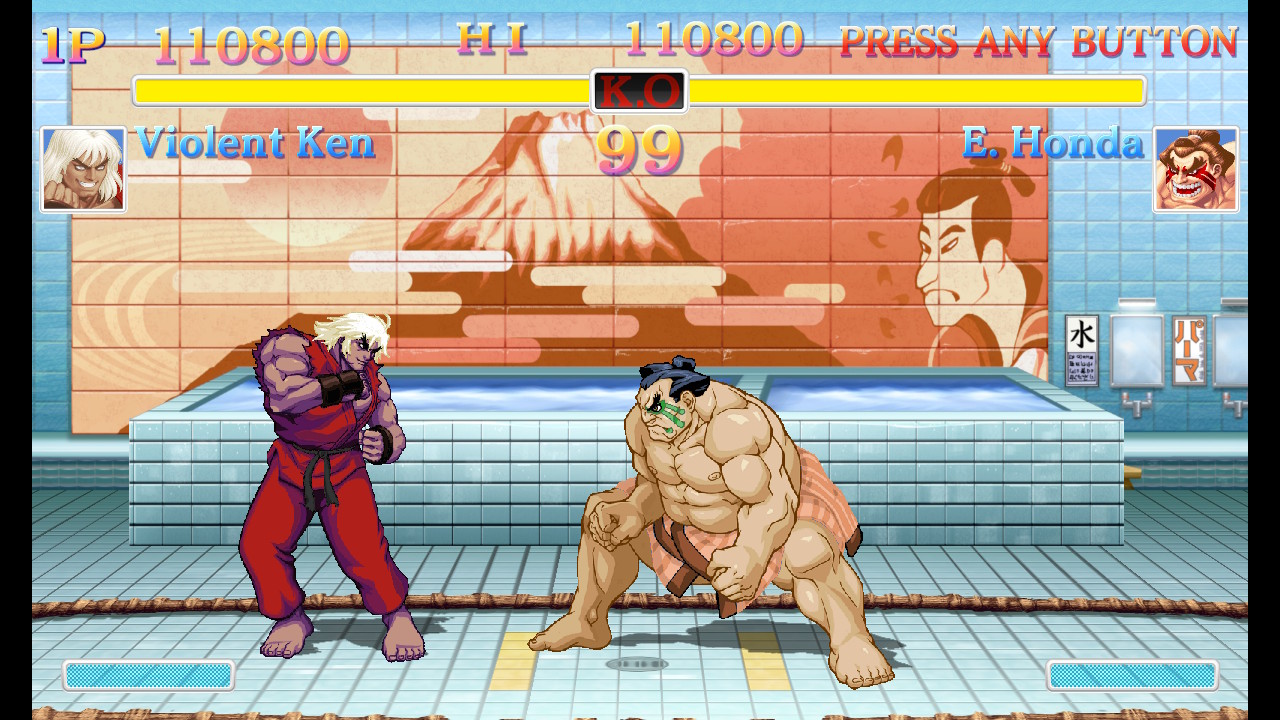 If you are a fighting fan and want a 2D fighter, you may be better off grabbing on of the NEO GEO titles at a fraction of the price. If you want something fresher, and more suited to the Switch’s capabilities, then wait for ARMS. If you love Street Fighter II and the nostalgia is too much for your inner child however, then you’ve probably already decided to buy it. Just don’t pay too much for your copy – if you can help it.

A lack of a current alternative and bags of nostalgia may see you go for Ultra Street Fighter II: The Final Challengers and both outlooks will probably be satisfied by what’s here. However, releasing it at a premium is shocking, and Way of the Hado is pretty rubbish. If you MUST have it, wait for it to go on sale.